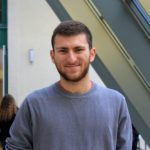 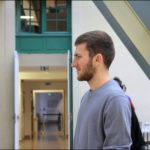 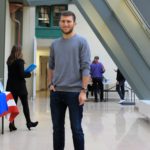 First off to introduce yourself, three facts about you.

I speak six languages, four fluently – Greek, English, Spanish, and French – and I can communicate well in Chinese and Italian. I’ve played piano since I was six years old, and I won Class Sarcastic in my Senior year.

Why would you like to be a student rep?

I’d like to be a student rep because, first of all, I’ve done this before and I know what it’s like and I enjoy it, but also because I’ve been taught that when something is broken, you don’t throw it away, you fix it, and there’s a lot that I think we can fix in Sciences Po. I want there to be greater transparency in communication between the administration and the students, I want to work towards passing student reforms about academic structure, and I think the best way to do that is through being a student rep.

Definitely, in my senior year I was in my school’s executive council. We were a group of four people who represented the entire high school, we were able to talk to the administration and actually get the homework policy changed and insert a plan in the school’s capital budget. So I do have experience in being something very similar to a student rep. I was also my school’s conference manager for the RIMUN conference two years in a row and I was on the student accreditation committee, so I had a lot of experience in terms of teamwork and work on projects.

What would be your main aims and missions as a student rep?

First of all, I want to fight for greater transparency with the administration, both in Reims and in Paris. I want there to be better communication on even very simple things such as the exam schedule, because we are such an international community we have students from all around the world from Australia to the US to China, and the administration changing the exams to make them a week earlier or a week later obviously causes a problem because these students have booked tickets and if they choose to not book tickets, it’s very difficult to find tickets for such long flights on such short notice. So I want there to be good communication about that, I want the exam schedule to be out at least a month in advance and the dates to be communicated more than two months in advance and not be changed so that students can plan out their vacations. I also want to pass student academic reforms or rather fight towards passing them, I want the library to be open later, especially on Saturdays, and open on Sundays as well, because we’ve all had way too many unproductive Sundays sitting at home watching Netflix. I also want to bring up the point to the administration that, right now, the lectures and the discussion sessions are doing the exact same thing, and that’s really taking away from the value of both. So I want to see lectures go away altogether, or have the discussion sessions focus on a deepening of what we learned in the lectures. We also need better communication between the different associations so we don’t end up with eight different events on a Wednesday evening every week. I want to have a more centralized process of having things done online from signing up for work rooms in the library to submitting suggestions to the student reps, so I really want to make use of the fact that we live in 2016 and that these technologies exist and really make it a lot easier to just do things online from planning events (so that nothing coincides) to booking workrooms and submitting suggestions.

First of all, I think that I’m the most or at the very least just as qualified as the other candidates because I’ve done this before, and I’ve done it well, we’ve succeeded in getting many things passed. I’m also very passionate about our campus and really affecting change. As most people know, I basically live on Facebook, and that’s not always a bad thing, because I’m always very easy to reach. So if anyone ever needs anything from me they know I’m just a Facebook message away. I have a 24 hour answer policy and will often answer you in much less. So I think that makes me especially suitable for this position. As we’ve seen lately, especially with the events surrounding Professor Ruchet’s firing, social media, in general, has been really valuable for the student representatives, and being someone who uses it and understands it well, added on to me being qualified, I think makes me the most suitable for this position.

If you were a famous political leader, who would you be and why?

I think that I’d probably be Angela Merkel because she’s very pragmatic and she gets things done. She doesn’t always come across as a very likeable person on the outside, but I do sincerely believe that she’s a very nice person who has the best interests of her people at heart. I also think that she’s capable of adapting her position based on the needs of her country and her people, which we’ve seen her do with the refugee crisis, and maybe even adopt a position that’s not popular, but maybe that’s what’s needed, and that’s one of the ways I view myself, and I think that’s someone I’d be similar to as student rep.