The Irony Behind the Glorification of Banksy

By The Sundial PressDecember 2, 2017 No Comments

Amsterdam is known for its narrow buildings, labyrinth of canals, countless vintage shops, and of course, the lingering smell of the devil’s lettuce in the tourist-populated Centruum and Red-Light District. This grunge-meets-hip city is truly one of a kind, and its particular atmosphere is also reflected in Amsterdam’s art scene. Museumplein (Museum Square) is home to three of, arguably, the most important museums of Holland. Here, infamous highbrow pieces, such as that of expressionist painter Van Gogh and Renaissance painter Rembrandt, are juxtaposed with what is typically viewed as lowbrow, namely graffiti by the notoriously satirical and mysterious British artist(s) Banksy, whose work can be found on display at the Moco Museum of Modern Art. 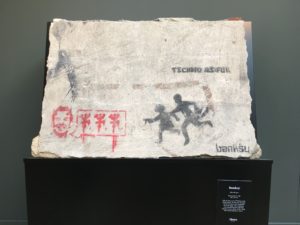 Banksy exposition at the Moco Museum of Modern Art

“Authorities don’t approve of graffiti because only those things that make a profit have a right to exist.” These are the words of Banksy, who first began their graffiti in the 1990s in Bristol, England and soon turned to stencilling because it took much less time to complete (leaving much more to run from the police). Their pieces are a form of social commentary that usually send an anti-establishment, anti-war or anti-capitalism message. This last bit is quite ironic considering that since the explosion of his popularity, Banksy’s originally fringe art has now been embraced by the mainstream—perhaps against the artist(s)’ will. 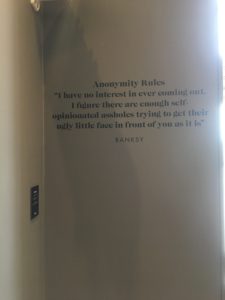 Banksy’s work has been sold for millions among celebrities, and some people have even removed the graffitied bricks of his early works to auction them off to museums and art collectors. Moreover, public authorities who used to chase after the artist(s) and paint over their compositions have now covered them in Plexiglas so as to preserve them, thus granting it a kind of “prestigious” status among street art.

But is this really how Banksy meant for their art to be appreciated? As one part of a growing trend for sub-culture, or as an “alternative” or “hipster” sub-sect of the high-brow art world? Although most would immediately point to Banksy’s unverified identity as the locus of their mystery, what is equally, if not more, interesting is how quickly and successfully their work has been accepted by mainstream society. What was initially an expression of rebellion is now contained in a not-so-anti-establishment place where people pay to see Banksy’s art, and pay even more for sweaters, t-shirts, mugs, plates, and other commercial products imprinted with their graffiti pieces. This leads us to ask ourselves: doesn’t the commercialization of their art take away from its initial purpose?

Banksy’s work is interesting insofar as it is meant as fringe social commentary, but has ended up being widely accepted, and even commended by the masses and critics alike. Perhaps this is all part of the irony, that the very society depicted, rather derogatively, is the same one that buys into (literally and figuratively) their work. Of course, at face value their art is still powerful—it makes us viewers reflect on the horrors of our status quo and sensitizes us to the harmful parts of culture that we have come to normalize. But when thinking about the context in which they started doing their art, that is, as a means of rebellion, while walking through the rooms of the gallery with Banksy’s work neatly hung onto the walls, one can’t help but wonder if what was initially meant as a radical voice has now been muted.