By The Sundial PressDecember 4, 2017 No Comments

Captions written by Félix Maupu of Amnesty International. Photographs by Chloé Joubert for The Sundial Press 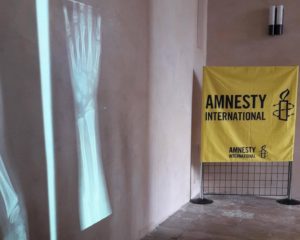 From November 13-17, Sciences Po’s chapter of Amnesty International organized a photo exhibition on police brutality on campus. It consisted of photojournalists’ work and explanatory signs, but also the soundtrack of a protest suppressed by police, which startled students rushing to class. Art student Paul Bonneville created a mural painting, titled Le Dialogue, for the event. 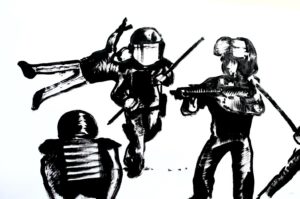 Le Dialogue, Paul Bonneville. On the June 10, the UN Committee against Torture raised concerns regarding allegations of excessive use of force by police in France in the context of administrative searches conducted using emergency powers. The panel called for investigations into those allegations. Frequent demonstrations took place against the French government’s proposal to reform the labor code between March and September. A minority of demonstrators engaged in violent acts and clashed with police. 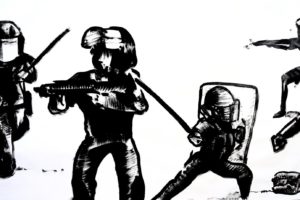 Since the fourth renewal of the state of emergency in July, the authorities were expressly permitted to ban public demonstrations by claiming that they were unable to ensure public order. Dozens of demonstrations were banned and hundreds of individuals were subjected to administrative measures, restricting their freedom of movement and preventing them from attending demonstrations. On several occasions, police used excessive force against protesters, using tear gas grenades, charging at them violently and using rubber bullets and sting ball grenades that left hundreds injured. 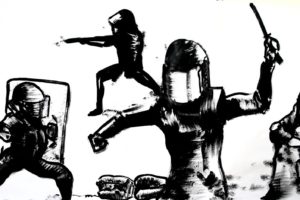 Amnesty International is also very concerned about the situation in Catalonia. “In several cases, the actions of National Police and Civil Guard officers involved excessive and unnecessary use of force, and the dangerous use of riot control equipment, injuring hundreds of peaceful protesters,” said John Dalhuisen, Amnesty International’s Director for Europe and Central Asia. The human rights organization has also documented dangerous and inappropriate use of riot control equipment such as rubber balls by National Police officers  in Barcelona. 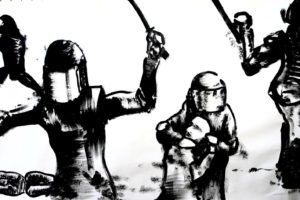 Amnesty International recalls that rubber balls can cause serious injuries, especially if they hit the head, face, or upper body.  The imprecision and lack of reliability of most of launchers and projectiles increases the likelihood of them causing serious harm. Rubber balls used by the National Police and the Civil Guard in Spain cannot be used safely or in line with international standards on human rights and should be prohibited. 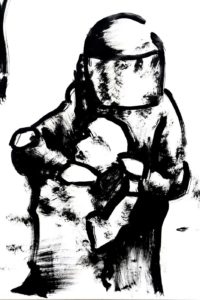 The organization has also received accounts and has seen images showing that officers used riot control equipment and excessive force against people who had gathered in the vicinity of certain schools, such as Escuela Mediterrània in the Barceloneta district of Barcelona. Images in the media show how, outside this polling station, police officers beat defenseless people who posed no apparent threat. For example, one officer beat a woman around the neck and face on at least two occasions, without any apparent provocation. In the same footage, another National Police officer can be seen punching a man in the face. Similarly, images filmed in Sant Joan de Vilatorrada, Barcelona, show a Civil Guard officer hitting demonstrators in the face with his rubber truncheon as they surrounded the polling station. 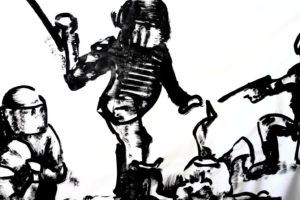 This conduct is contrary to international standards which stipulate that truncheons and other devices having a similar impact should not be used against people who are not behaving in a threateningor aggressive manner. Where their use is absolutely necessary, officers should avoid causing serious injuries; they should refrain from hitting people with truncheons on the head, neck, throat, spine, lower back, solar plexus, knees, ankles or vital parts of the body. 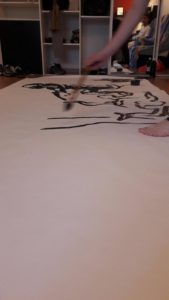 The making of The Dialogue. “I chose Indian ink and a big paintbrush to emphasize on the “violence” of the fresco,” Paul Bonneville explains. “The idea was really to show the difference between an excessively armed policeman in his full body armor and the defenseless protesters.” 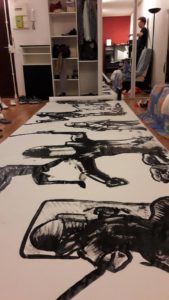 “The anonymous faces are to show that the actors of these acts of violence clear themselves of responsibility by the “risky” status of their job. I find that the visors they wear also behold something quite violent… I’ve never had any such experiences myself, but I do know people who have.”

Paul Bonneville is a student at the Atelier de Sèvres in Paris. (Instagram link: @paul.bvl). Exhibition organized by Félix Maupu for Amnesty International.