By The Sundial PressDecember 10, 2017 No Comments

At the War on Screen film festival in October, one of our reports got the chance to meet Syrian filmmaker Firas Fayyad, director of Last Men in Aleppo, a documentary about the daily life and struggles of the so-called White Helmets. Under a particularly brutal bombing campaign by the Assad regime and its allies, Firas Fayyad and his crew followed the Syrian Civil Defense force as they raced to the scenes of air and missile strikes to rescue survivors from the rubble. The film follows closely the volunteers Khaled, father to a three-year old girl dubbed the “child rescuer”, as well as brothers Ahmad and Mahmoud.

How did you get into film-making, and what does this art mean to you?

Movies are my language, it’s where I find myself. I started playing around with movies and photography early, when I was sixteen-seventeen. And even earlier I had been watching films which I became attracted to.

Then I went to a law school, which I didn’t complete, jumping to acting. I haven’t completed it either, switching again, this time to studying filmmaking. I only started working on movies as part of my profession when I turned 25. I would also have jobs surrounding movie-making, such as writing the scripts or consulting film companies.

Making movies is also a way to explore equality and justice, as well as fight for these ideals. I often think about my father, who had lots of problems due to Hafez al-Assad. He lost many opportunities in life: from his job to his own place which once burnt because he was afraid of arrest. I want to feel proud of my father, but he didn’t publish a book he had dreamt of publishing. He never smiled. You see that someone close to you doesn’t smile, and you ask yourself why, and this motivates me to fight for justice.

How did you go about filming this difficult movie? Was there anything in particular you had in mind?

We felt like we had to use the camera as the characters’ eyes: this is the style that we created. The mission of the camera and the mission of the character are one and the same: searching for something which brings hope. Sometimes, we’d shoot one take for more than an hour as we were following the character around, under daily bombings. It took us six months to work on the story and finish the assembly cut. After that, the actual editing work went on for about three months.

We called our way of filming “the boxer style,” as we tried to capture the moment in the same way a boxer starts to fight: beginning with a long shot and then moving in closer and closer. “The boxer style” was also a joke helping us to de-stress. And we didn’t need to make the camera our protagonist. Our goal wasn’t to produce beautiful pictures.

As to the characters, we didn’t want to make them either heroes or victims. It’s dangerous and even insulting, if you put the character in a weak situation. If you make them a hero on the other hand, you raise them above the rest of humanity. Meanwhile, we wanted to portray them as humans, who make decisions and, occasionally, mistakes. And the spectator starts to criticize these decisions: for example, was Khaled wrong to stay in Aleppo in the end.

What has been the international reaction to your film so far?

The audiences around the world usually reacted to the film with passion. It happens quite often that after watching it, people come to see me to hug me and to cry. This is not a film about a war, but rather what it means to be human and not to lose faith in our own humanity. Many change their way of thinking. I often tell the story of how an American marine, who, having watched my film at the Sundance Film Festival, came up to me to say, “I am also the reason children died.” (He had fought in Iraq, Somalia and Afghanistan.) And then he started to cry.

Not just as a Syrian, as an artist, I feel happy when my film brings the audience to this emotional moment when they’re finally motivated to use their humanity in order to make a difference. It’s like putting yourself through some kind of a machine and you don’t know if you are going to come out cleaner or, sometimes, dirtier than before.

But I also receive a lot of insults. It’s not just the Russian propaganda or Assad, but also the far right in Europe. A lot of people have a lack of understanding of this complex war, but would still like to have an opinion about it. They don’t leave their comfort zones: they just Google it and take word for word the first source that comes up, which may be completely false… And it is also a way to show off! Easier to start by criticizing the work of someone else! 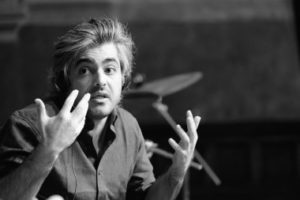 Every day, I receive insults and abuse on Twitter: they even threaten my cinematographer. And it hurts, you know, it’s your work, it’s a difficult subject which you’ve worked on expressing. It becomes like a small prison for me sometimes: I need to constantly think of my safety, but also of that of my family and of my colleagues.

My characters are dealing with the consequences of the war every single day and they also inevitably encounter evidence of Russian crimes. And this information war is part of the war, and you can get killed. One of the secondary characters of the film has been arrested by Assad, for instance. So the White Helmets are attacked from many sides, even though the main attackers, of course, are Assad and Russia.

What do you think about the possibility of Aleppo’s reconstruction after its so-called “liberation” by the Assad forces?

Fayyad: I don’t understand why political analysts speak of a “liberation” of Aleppo. Liberation from who? The people living there? Of course, there were extremist groups, but they were reacting against an extremist regime, that was bringing in militias and foreign fighters who were speaking of a “holy war” and relying on all kinds of weapons. How can such a regime then claim to liberate religious minorities? Thousands have been forced to leave and many houses were then destroyed. If civilians are forced out of their houses by the army, I don’t call it liberation, I call it forced displacement, and it’s a war crime. There is a saying that, “in a war, there are no winners, only losers.” There is also no such thing as “liberation,” only destruction. Every time someone consolidates power, they try to provide a narrative of liberation from enemies. But let us ask ourselves about these enemies and about the victims. How many civilians were killed to liberate Aleppo from the opposition? How many civilians were killed in Raqqa, too?

Secondly, I need to correct the word “reconstruct:” it’s an economists’ term. But who are the companies who will rebuild the city? And who will occupy the houses of the victims? In Aleppo, my sister’s and friend’s houses have been destroyed; my cinematographer’s, too. Khaled’s house has been destroyed and Khaled himself has been killed. Someone will come in and occupy these places.

But it’s very difficult to speak about the future. Those who have the power make the rules. Today Assad is bombing ISIS, but one day, it might become against his interests and he’ll stop. Yet, what is the difference between ISIS and Hezbollah? It is not my question, I am simply transmitting the question asked by those who are forced to flee their homes and who see both groups murdering civilians, occupying cities, kidnapping people and demanding ransoms.

There weren’t a lot of female characters in the movie; are there no women among the White Helmets?

The role of women is very important at a time of war. My next movie is precisely about that and hopefully it will appear towards the end of 2018. But for Last Men in Aleppo, it was not my choice to say that I didn’t want more women, it was just linked to the story.

My film was about the first respondents, and female White Helmets are usually concentrating on the preparations for the bombing, like warning and training families for self-protection. But such groups weren’t actively involved in Aleppo. Women there were much more present in documenting human rights violations and activist journalism.

I wanted to bring more female characters into the film, like the wife of Khaled. But she was pregnant at the time and scared of being filmed. It is very difficult to convince women, even the most liberal ones, to appear in front of a camera, which is always very threatening. And you can’t just say that your story needs more women and then throw female characters in there just to show them off: it’s a cheap trick and it’s disrespectful towards these characters.

But even when it comes to men, it took me and my cinematographer five months to get their agreement to be part of the film. They still often changed their minds afterwards: what they did was a responsibility, not a way to show off.

Do you feel like your portrayal of the White Helmets manages to convey hope?

I didn’t want to make a film about the White Helmets as an organization. I wanted to make a film about a father, Khaled, and his daughter, but also the brothers Ahmad and Mahmoud. About those who work in very difficult situation, but manage to do more than just survive. Why don’t they join armies, pick up weapons, become terrorists? The answer has to do with how good we can be as human beings.

When it comes to Syria, the media often show you ISIS. But it’s also a cheap trick. Of course, there is ISIS and there is al-Qaeda. But a war movie doesn’t have to be about that: you also don’t have to make it all about weapons and fighting. Instead of thinking about the fighting factions, I am focusing on how people protect themselves from war, in a way, and deal with smaller things: their relationship with others.

This also helps to focus on justice. But you need many more movies for justice to happen. How many films have been made about the Holocaust? And yet it’s still necessary for us to remind ourselves of how it destroyed us as human beings.

I am thinking of how Khaled, faced with daily bombings, opened his smartphone to see what he thought was his destiny: the photos of torture by government forces. So it is also about how you see something on your screen and then spring into action, and that applies to everyone, not just to Syrians.

What kind of reaction would you like to provoke in the West?

There is an urgency to pressure our elected representatives, so they can push for a change in government policy. We are all inter-connected, and, one way or another, the suffering of the people in Syria affects the whole world. There is the idea that being faced with violence and injustice also makes you violent: which explains how the anger from Syria might translate into a terrorist attack elsewhere.

I am also putting the spectators in a position of witnesses to a crime, and as witnesses, they now have to do something. There has to be a reaction. We need a great “never again” campaign! Plenty of cities are still being bombed and besieged, and not just in Syria!

Note: This interview has originally been published by Al-Jumhuriya at the following address: https://www.aljumhuriya.net/en/content/syrian-filmmaker-who-leaves-marines-tears