By The Sundial PressJanuary 27, 2018 No Comments

Drastic changes for current first year students were announced Thursday night that will largely alter the methodology for next year’s curriculum and third year abroad options. The announcements explained the newest aspects of the Acte II reform of the Undergraduate college, reforms that have been in the making since the inception of Acte II in 2014.

The reforms are often the source of “doubts and misunderstandings,” as the Reims Campus Director Tilman Turpin stated. Dean of the Undergraduate College, Benedicte Durand, stated that they are made to teach “the fundamentals and basic knowledge so critical for the next steps of education.” Durand added that with this reform, there will be a “streamlining and more qualifying degree than ever before.”

“This reform is not something that has been decided in a dark office in Paris,” Turpin stated in a nod to students’ concerns that their opinions about the reforms have not been heard. 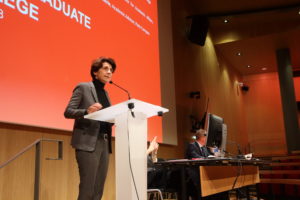 He reassured the anxious crowd that the reforms are indeed the product of three years time of meetings with the various departments of the university system and with the coordination of partner universities, particular universities that are in a dual degree partnership with Sciences Po.

Turpin outlined the goals of the new reform as mainly being the creation of a new core curriculum across all seven undergraduate campuses, a new system of majors, and adjustments in the third year abroad program.

The new core curriculum would be a way of ensuring that all students in the Sciences Po undergraduate system “have the same diploma as other students,” as there have been major cleavages in the core classes spanning the university system’s teaching of students aiming for the same Bachelor degree.

The new core courses for second year students will be History of Contemporary Worlds in the 20th to 21st Centuries, Introduction to Digital Culture, and Science and Societies. Students will continue to choose their art workshops and language courses, but the introduction of a disciplinary course has been added. Disciplinary courses include Law, Economics, Sociology, and Political Science (with History being a core course in the new framework) and students get will choose one of the four options to compliment their Major coursework.

Olivier Chopin, Deputy Director for Academic Affairs, continued with the explanation of academic majors, which have been revamped. The administration has decided to move away from the classic majors of the current 2A curriculum to a “pluridisciplinary approach” that is a “part of the genetic code” of not only Sciences Po, but also the Jesuit system of education that once was housed prior to Sciences Po arriving in Reims, Chopin stated. The three new majors will be Political Science, Economy & Society, and Political Humanities.

Academic Advisor Anne-Célia Feutrie explained that students must confirm their choice of major by March 12 (Week 9 of the second semester), but will confirm their selection by the end of May.

“There will be ample time to make an informed decision that you’ll be able to review or come back to after your final exams,” she said. 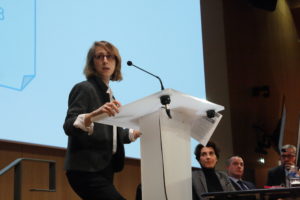 Third year studies have also been altered, as the reform will grant students the option to split their third year abroad with one semester in an internship and one semester at one of Sciences Po’s 470 partner universities instead of spending the full year at a partner university. Previously, students could choose to spend their full year in an internship.

Students studying a specific region (like North America or Africa at the Reims campus) must validate their speciality on the region by attending a partner university in the designated region of study or continuing their study of the region at the university they attend, regardless of the region.

At the end of the information session, the floor was opened to questions from the audience. In a show of unity, the students from the Euro-African program raised their hands prompting confused looks from the administration officials. Chopin replied  “Je crois que tout les Eurafs ont une question”.

Romaric Compaore, 1A Euraf student, stood and said that “we do not have these roots in our program…cornering the presence of Africa…” and that “shouldn’t we have at least one fundamental subject in [sic] Africa?” He said that they do not want to be students that always protest, but want the administration to see these concerns of a bilingual presence and lack of curriculum concerning Africa. 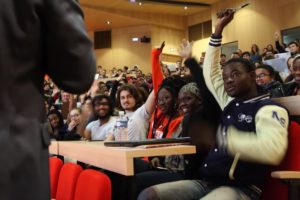 1A Euraf student Romaric Compaore (right) raises his hand to ask why his program has lacked on its focus on Africa. Photo: Chloé Joubert//The Sundial Press

Durand, for whom the question was specifically towards, replied in French as she felt she could answer more precisely. Even though “we have worked very hard” Durand noted, “it is true that… you were not completely aware on the meaning of this reform.” Durand explained that Euraf students in particular may feel this way due to “the impression that there is a refocusing, which is not intended to exclude regional specialties, but to articulate them around the core curriculum.”

Trying to assuage the concerns and frustrations of the Eurafs students sitting in the first four rows, Durand promised that in the second year, the focus on Africa will be stronger. She asked for patience from the Euraf cohort, and promised that they will not be be any longer disappointed when the reform grants them more opportunities to focus on Africa. She ended her nearly 12 minute response stating “you will be assured that the link of the specialty is built from end to end and more and more.”

Another student stated bluntly: “I hope my question will be clearer than the Dean’s answer… For those who do not wish to wait and trust you, is a repatriation on the Paris Campus possible? You said that the purpose of this reform was to organize.”  Durand replied that “things are very clear…on the other hand, there is a limit, and it is called courtesy.”

Further questions were asked by Euram students. Another question regarding future dual degree universities, and whether Sciences Po is looking into the possibility of joining with African and Asian universities was answered by Durand stating “why not?” Despite offering a Euro-African program, Sciences Po does not offer dual degrees with any African university.

Turpin also confirmed that tuition fees for the third year would remain constant regardless of a student’s choice of third year university and/or internship.

The article also misattributed one of the questions to Baptiste Gaultier, whose name has now been removed.