Trip of the month: a week in Andalucia

By The Sundial PressFebruary 6, 2018 No Comments

By Morgane Briere and Justine Guerineau

“Al Andaluz” : a word and a time that recalls medieval History. The southernmost region of Spain was granted its name of Andalucía following the historical period of Moorish rule from the 8th century to the late 15th century. Centuries after the fall of Grenada, the region’s culture and landscapes remain strongly influenced by Al Andaluz. The entire region is a beautiful illustration of a “mezcla” of two cultures: that of the Spanish empire and that of the Moors.

Andalucía brings forth images of heat and temperatures rising up to 40°C – for some this can be reason to avoid visiting the marvels of the region. Avoid the sadness of turning down a visit of the Alhambra and book a February escape! This trip is for people who thrive in mild temperature, small crowds and wonderful architecture.

As one of the sunniest places in Europe with more than 300 sunny days a year, Andalucía meets all the requirements for a perfect trip away in the earlier months of the year.  It is a great time to discover the rich culture, gastronomy and landscapes of the region which tends to be less crowded at this time. In short, going to Andalucia in the winter will be cheaper – as hotels lower their prices- and are less stifling. Offering sun, views of the sea and tapas all night long – the trip we have planned for you is an affordable week-long get-away!

How Do I get there?

With the February break already in our horizon, planning a weeklong trip to Andalucía felt just right. With daily flights leaving from CDG we have laid out an itinerary that allows you to visit three of the regions most intriguing cities. Starting out in Sevillá – your point of arrival – we suggest you make the Historical city of Granada your second stop, then perhaps grant the city of Cordoba a final stop. 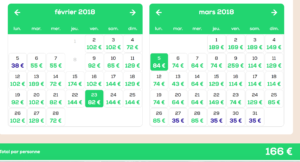 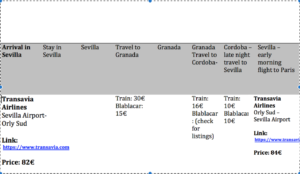 We have a few ideas for your accommodation in the capital. Renting an airbnb with a few friends is an easy and often pleasant solution. The low prices during the colder season make this an interesting option.

Airbnb in the center of sevilla for 4 guests: 81 euros a night

Airbnb in the center of Sevilla for 4 guests and more! 89 euros a night

If you are on a tight budget and want to live the quintessential student hostel experience,  Hostel One Catedral or the Nomad Hostel offer beds from 16€ a night to 45€.

Step 1: delay every one of your meals !

Step 2: Have your main meal at lunch!

Breakfast: Have a tostada at Bodega El Picadero or Sevilla’s best Churros at Bar El Comercio

Lunch: Have a Sevillano’s most important meal of the day and enjoy fried fish and tapas at Freidura La Isla

For dinner why don’t you try a spin on the bar crawl trend – and create your own tapeo crawl.

Try the sophistication of Sevilla’s Arenal district to enjoy great food and the passing of well dressed locals or Feria for its rightly-name party charm!

Where to go out?

As the capital of Andalucía, one could hardly imagine a better place to watch Flamenco and drink Sangria. Today, the city holds many bars and cafes where the traditional andalucian dance is performed but our three favourites are Casa Anselma, Lo Nuestro and T de Triana. The first is a milestone of the city and brings tourists from all over. Lo Nuestro provides an alternative to the more touristy flamenco bars that flood the cities nightlife. T de Triana is home to free flamenco shows on Thursday and Saturday nights. You can order the classic patatas bravas and have a drink there as the bar is one of the cheapest places of the Calle Betis. This street is known for its large number of bars, pubs and night clubs. You can do as the sevillanos and move from bar to bar; have a drink or eat tapas at each one of them.

With two nights planned in Sevilla, one might look to see more than Flamenco and Sangria. We have singled out two clubs in the city – (Sala Boss) one offering commercial music and themed nights on Thursday nights, the other being a favourite for rock and electronic music fans.

Walking around in Sevilla will allow you to take all the time you need to observe the wonders of the city. You can stop by the famous and magnificent Plaza de Espana and then relax at Maria Luisa Park, the beautiful green area located at the heart of the city.

For only 1€50 – or for free for European Union Citizens- art lovers will enjoy the visit of the Seville Museum of Fine Arts, located in an old convent, where paintings from artists such as Velasquez, Goya and Murillo are exposed. Until April 2018, they will also be able to visit a temporary exhibition called « Murillo and the Capuchins of Seville » that was set up for the 400th anniversary of the birth of the Spanish painter Bartolome Esteban Murillo.

How to get there?

Located Plaza Virgen de los Reyes, The Giralda Tower is one of the most visited monument of the city, along with the Cathedral and the Alcazar palace. The tower is an example of Mudejar architecture, a style resulting from the mix of Muslim and Christian influences. Mudejar refers to the Moors who stayed in Spain after the Christian Reconquista and participated to the renovation of many monuments. The Giralda, which used to be a minaret, is used today as the bell tower to the Santa Maria Cathedral.

Admission fees: Students under 26 have to pay 3 euros to visit both the Cathedral and the Giralda

The Real Alcazar is a two minutes walk from the Plaza Virgen de los Reyes. The Royal Palace of Seville and its gardens is a must-see. The Moorish fortress is the oldest European Royal Palace still used by the Spanish royal family when they spend time in Seville.

The Giralda Tower, the Cathedral and the Alcazar have been recognized World Heritage Site by UNESCO in 1987. 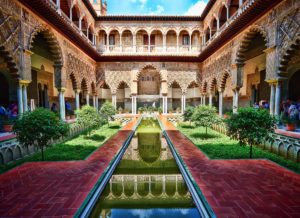 Game of Thrones fans will surely recognize the setting of the Water Gardens of Dorne that serves in season 5 as House Martell’s home. 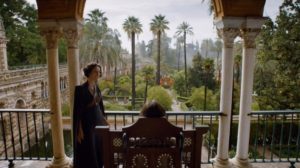 Admission fees: 2 euros for students aged between 17 and 25. From October to March, the visit is free on Mondays from 4pm to 5pm.

Due to the high influx of tourists, it is highly recommended to book one’s tickets in advance.

If you’re looking for something authentic and with a view of the Alhambra this four person airbnb is worth checking out.  The price is 70 euros a night.

For Breakfast continue on with the morning tostadas at  Cafe 4 Gatos and enjoy your cafe con leche.

The famed empanadillas from Pasteleria Lopes-Mezquita have been recommended to us emphatically. If you choose to visit, please let us know what you think.

Fancy a late night snack? Granada is also home to amazing kebab stands! Give one of the shops on Calle Elvira a try.

Tapas again! Bodegas Castaneda is one of the oldest tapas bars in the city and is best described as “Cheap, crowded and a bit chaotic” . Enjoy the fried fish and aperitif.

Moorish heritage left many traces in the region but the Alhambra remains  perhaps the most remarquable remnant of Muslim rule in Spain. The palace has always attracted many visitors – up until today it is Spain’s most visited monument! Described by Moorish poets as “a pearl set in emeralds” it became a place of refuge for many artists and intellectuals as the Reconquista progressively won victories over Al Andalus.  Today the palace and its gardens are recognized by UNESCO as a World Heritage Site. Stroll through the gardens and the halls of this fortress yourself by booking your tickets in advance! 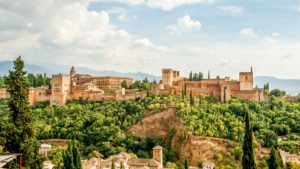 Admission fees: To visit the Alhambra and Generalife: 14 euros.

The city of Cordoba was once of the largest in Europe. While under the Moors economic and intellectual prosperity brought the city fame and glory – today the magic of Cordoba is in its whitewashed walls, flowered patios and alluring history. 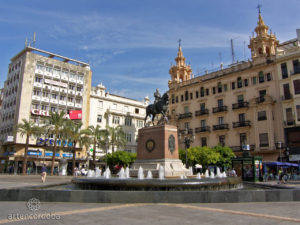 Hostal : Cordoba Bed & Be offers you a place to stay in the center of the city for only 20 euros a night!

Cordoba offers a variety of cheap but great food. We have listed for you a few of the city’s classic eats with a special accent on the salmorejo – a thicker take on gazpacho.

Salmojeria Umami brings you plenty of variations on the typical salmorejo. Be sure to check it out!

We recommend you finish off your day of touring and visiting with tapas at Mercado Victoria – a market place filled with food stands and tapas joints everywhere!

One cannot go to Cordoba without visiting the Mezquita. Cordoba’s Mosque-Cathedral and its 856 columns is a beautiful monument. To avoid tourists crowds, you can visit the building from Monday to Saturday from 8.30am to 9.30am, while it is more quiet.

With guided visit: 40 euros per person.

Without guided visit: 10 euros per person.

Only a few hundred meters from the Mezquita, one can also visit the Alcazar de los Reyes Cristianos.

Without guided tour, for students under 26: 2,25 euros

How to get there: Lines 3 and 16 with the bus network Aucorsa

An extra bit of intrigue for those Game of Thrones fans out there – you may enjoy visiting sites featured throughout the series such as : 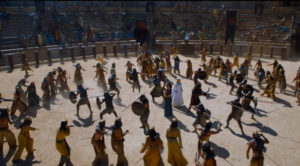 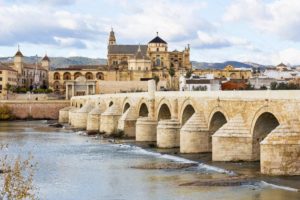 And here’s a little bit of final advice before you head off into your own Andalusian adventures : Do not forget your student ID, it will come in handy when visiting and provide you with plenty of discounts – all the more reason to check out all our food suggestions.

Hopefully you return full of tapas, fried fish and adventure! You may even want to try it all again – this time in the region’s infamous summer heat. If you do chose to take the plunge and run off to Andalucia for the week,  let us know what you thought  ¡Que tengas suerte!