By The Sundial PressFebruary 13, 2018 No Comments 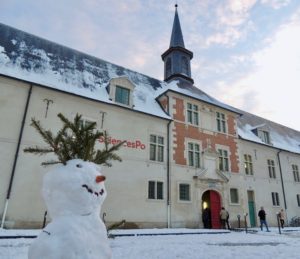 As anyone who has followed the news – or visited Paris for that matter – knows, heavy snowfalls have severely stressed the infrastructure of the French capital. A recent article in The Sundial Press outlined the reverberations in Reims, and some general musings of students on the white blanket that had descended on the City of Kings.

This could be an article about the lack of appropriate response of French authorities to the crisis provoked by the weather. Flights cancelled, trains delayed, people sleeping in their cars on the highway, homeless persons at the mercy of the biting cold on the streets of Paris – the list could be much longer. Canadians and other Northerners scoff at French incompetency of dealing with the snow, and even some Frenchmen would agree that the state had failed to sufficiently prepare for extreme weather events like this one.

This is not, however, such an article. Paris – and many other parts of France – aren’t prepared for heavy snowfall, because it is such a rare event. Expecting Paris to have an armada of snowplows and an efficient infrastructure for dealing with heavy snowfall is like expecting Switzerland to have a powerful navy in their alpine lakes. Sure, they could, but is it cost-effective and sensible?

The gist of this article is to remind how the phenomenon of global warming does not translate to a simple and constant increase in experienced temperature across the globe. Some wish to use extreme weather events during winter – such as the January 2016 U.S. blizzard or the current heavy snowfall in Paris – as common-sense examples of how global “warming” is not a threat to be taken seriously. Anyone with a trade relating to the seasons and the weather – farmer, fisher, forester… – could make the very simple distinction between weather and climate. The difference is in the period measured: weather is what one sees when looking out the window, while climate is the pattern of weather measured over decades.

A universally warmer climate, however, is not the answer either. The average temperature of the atmosphere has risen, and will rise by some degrees, but this spells very different effects in regions with different geographical features. Climate and weather on Earth are the products of a complex network of factors like ocean currents, changing jet streams, melting Arctic ice, and atmospheric pressure. A rise in global temperature will disrupt those factors and change how those networks operate – bringing change other than a rise in temperature.

Research has linked global warming to an increase in extreme weather events, be it in winter or summer. The scientific community attributes, counter-intuitively, some of the blame for recent extreme winter weather in the United States to global warming. The jet stream, think of a slightly undulating stream of air circulating the globe at a certain latitude, holds back the cold winds caused by the Polar vortex – think of an area of low pressure circling around the North Pole. In the past decade the curves made by the stream have become steeper, sometimes allowing arctic air to escape and blow across the Eastern part of the United States. Scientists don’t ask if, but only how much of, the change can be blamed on human-made global warming.

A final example of how global warming can bring unexpected consequences is showcased in the 2004 film The Day After Tomorrow. In the film, the meridional overturning circulation in global oceans shuts down. Global cooling, extreme winter storms, and practically a new ice age follow. While this is a massive exaggeration, scientists have expressed some worry at the slowing down of the Atlantic circulation, and some have even forecast its end – in 300 years or so. The circulation is influenced by winds as well as water density caused by different temperatures and levels of salinity – that is why the term thermohaline circulation is also used. Freshwater coming from melting ice caps in Greenland changes the salt content of the water and disrupts the circulation.

Global warming can bring colder weather. The seemingly paradoxical statement is true and necessitates action. Extreme weather events mean that more preparation is necessary from individuals as well as from states. Sacrificing unconventional fashion, such as high heels, during snowfall might be necessary to not fall flat on one’s face. Walking like a penguin and wearing a hat are highly recommended, should this experience repeat itself next year in France. It is also arguable that French, and other, authorities should increase their means to respond to extreme weather events, from heavy precipitation to heat waves, to be able to avoid damage and disruption on a national scale.

Even though the correct way to move during a snowstorm is by taking small shuffling steps while looking down at one’s feet, the same attitude cannot be taken in facing these issues. Bold action and a clear vision are necessary for change to be implemented in time. In the meanwhile, I recommend bikers to get winter tires, and pedestrians to get a pair of winter shoes. We can’t know what next winter will bring, can we?

Miko Lepistö is a first year student from the bowels of Helsinki. The only student living on the notorious “other side of town”, as well as an avid biker due to necessity. Looney Truths runs once every month.