Uncovering The Secrets of The Tunnels Underneath Sciences Po

By The Sundial PressFebruary 15, 2018 No Comments 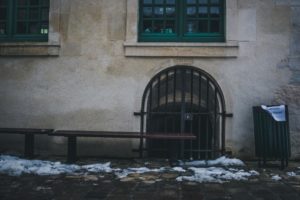 When you walk by the administrative buildings in the old courtyard, do you notice a mysterious staircase, barred by a locked metallic door? Have you wondered where it leads?

Rumors have circulated as to the existence of an extensive tunnels system underground, but few students are aware of their true purpose or intriguing history.

The truth is that below our campus is a vast network of medieval and Roman basements cut in full chalk, connected during the 13th century in order to provide a link between the Benedictine priory and the nearby Basilica of Saint-Remi.

Built on the remains of disparate Roman mines, the tunnels were more or less filled with dirt and rocks during the construction of the Jesuit College from 1619 to 1678. The Jesuits used the underground passages for storage of building stones and sand: if too much of it was above-ground it would be placed in the tunnels, to be reused for later stages of construction, or forgotten. Time slowly deteriorated the passageways, ultimately rendering them unusable.

The 17th century arcade cellar near building A used to provide one of the three points of entrance, alongside the Chapel cellar in what is now the student lounge, and, finally, an access in the Old Refectory currently barred with stone and rubble.

But as time passed by, the underground was given a new life. During the 20th century, the Jesuit College, now called “Hôpital Général”, became a home for orphans and old people. During World War II, the residents would take shelter in the cellar or, when the bombings were too intense, in the galleries themselves. After the war, the administration of the “Hôpital Général” forbade entering the tunnels, seen as too risky, but still used the cellars. The one under Building A hosted the Champagne made from our well-known vineyards, while the one under the Chapel (currently our Student Lounge) was turned into a morgue.

The subterranean area would have to wait until 1977 to be re-explored, when a team of Rémois archaeologists decided to clear the cuttings, revealing what impressive history surrounded us. The excavations carried out between 1979 and 1984 made it possible to detect the remnants of a vast Gallo-Roman villa of the end of the 1st century AD. During the 2nd century, the villa was destroyed by a fire, as a roof found with many intact tiles shows. The country residence was located in the courtyard of the new buildings, near the Saint-Maurice church, and is presumed to have been occupied by rich Gallo-Romans, as evidenced by the geometric decorations of the walls, as well as the presence of many pieces of ceramic and coins.

Today, the underground sector has been mainly cut off, too dangerous to visit freely. The precarious condition of the tunnels increases the risk of collapse; time and erosion only continue the degradation of the network underneath Sciences Po and the Saint-Maurice Church which began centuries ago.

We can still give you an idea of what the place looks like. The galleries are colossal, occupying the entire surface underneath Sciences Po and the FRAC. At least 10 meters deep, being constructed on an irregular and ad hoc basis meant that the network is now totally chaotic. Inside, you can find traces of the tumultuous history of the building: remains of a beautiful Romanesque column, a stone grave of a Benedictine monk, countless graffiti from the visitors from the last four centuries as well as various vintage objects (beer bottles, oil box…) predominantly from the last century.

Do you wish to know more about our campus and its fascinating history? Campus Ambassadors will soon host a historical tour for the students who have seen their curiosity sparked.