Who can we blame for the Florida shooting?

By The Sundial PressFebruary 20, 2018 No Comments 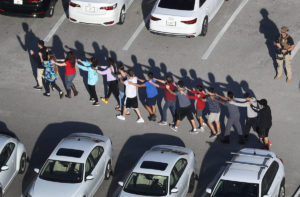 Last Wednesday a former student of a Florida high school entered the building and killed 17 students and faculty. This seems oddly familiar, and sadly it’s because we are getting all to used to receiving this kind of notification on our phones. This continuous occurrence of mass school shootings has no end in sight and this kind of event has simply become part of our daily life. We have turned into immunized bystanders in a deadlocked situation.

To make matters worse, Washington D.C. lawmakers are the first ones to settle down and forget. Only a few Democrats such as House Minority Leader Nancy Pelosi actually mentioned the Congress’ “moral responsibility to take common sense action to prevent the daily tragedy of gun violence in communities across America.” Yet this is only routine for the  Representatives and Senators; to tweet their thoughts and prayers, never turning them into concrete policies and shortly moving on to more urgent issues.

Since the beginning of the year, 33 mass shootings have been registered; that’s approximately one every two days. Nevertheless, the urgency of the matter never sticks. For the people that do have the ability, and moreover the duty of doing something about it, are simply not. It has become an endless cycle: a repetitive process of thoughts and prayers, the Republican side quickly denouncing the politicization of the tragedy and claiming the need for time, as respect for the victims of course, and thereafter silently waiting for the next tragedy to occur.

In addition to the traditional cycle of blaming the other side, U.S. President Donald Trump has blamed both mental illness, which is the usual scapegoat when the perpetrator is white, and the Federal Bureau of Investigation (FBI) for failure to act after it had received material putting the 19 year old shooter, Nikolas Cruz, into a questionable light. Although the FBI did not act based on those several red flags indicated by the Florida social services agency, the local police department, the report of a YouTube user, and the alarming testimonials from neighbors and relatives, it it nonetheless undoubtedly a failure of the political system. The blame cannot solely be laid on the FBI and must be placed on the politicians in Washington that are not setting the relevant priorities at the forefront of the debate.

When President Trump attributes the issue to mental illness, thereby behaving as another pro-gun activist crying “It’s not about guns!” in order to keep the powerful gun lobby on his side, while national lawmakers avoid debate in Congress at all costs, what is to be expected from the federal agencies? In February 2017 President Trump signed a piece of legislation that rolled back an Obama-era regulation whose goal was to prevent seriously mentally ill people from having access to certain firearms, allowing the entity in charge of the national gun background check system to distribute more information on mental illness. This law would have not probably warded off Nikolas Cruz, but it shows the intentions of the government respecting firearm regulation. More recently, on Trump’s 2019 fiscal budget, the National Criminal Records History Improvement Program and the National Instant Criminal Background Check System (NICS) Act Record Improvement Program would both undergo budget cuts. These actions do not point to the direction of a more regulated and strict system ensuring the safety of American citizens.

Meanwhile, the same-old debates are being discussed on television. How to treat patients with tendencies to kill, how to determine who can buy massive guns and munitions, and so on. It has become so ubiquitous in Americans’ everyday life that they do not realize that the rest of the world does not face these problems and has not accepted constant gun violence as a norm. Other countries may allow legal civilian ownership, but they do not witness the issue the United States is dealing with on the same scale. However, the issue is not that the United States has a significantly high number of mentally ill people, but a significantly high number of mentally ill people who have easy access to assault rifles.

Then, the question should be about the regulations: how it is possible that a mentally unstable teenager had an easy access to such a massive firearm? There is not necessarily the need to confiscate all guns from the population and prohibiting all access to firearms, but there is the need to at least create a system where before purchase there is a way to inspect a person’s mental fitness to own weapons. The law, or lack thereof, are definitively to blame. Moreover, the law is a concrete consequence of a country’s culture. The fact that Cruz’s family knew about the gun and simply told him to keep it under lock, shows just how normal it is for an adolescent to own firearms and is telling about the public opinion on the subject.

More than 40% of Americans are in favor of gun ownership, and considering the fervor around the Second Amendment, America would not be the same without its gun rights. Nonetheless, some Americans are so devoted to their gun owning laws that they don’t see how paltry their benefits are compared to how significant their dangers have become. When people are more scared of losing their gun licenses than to watch 14 year old girls and boys massacred in schools as a result, it is a cultural issue. When these school girls and boys are growing up with active shooter drills at school and feeling a twinge with every odd sound they hear, it is a cultural issue.

So, who is to blame for the Florida shooting? We all are. We can blame ourselves because we are just not outraged anymore. We can blame the politicians that are not willing to start answering the population’s cries for help. We can blame the agencies in charge of national security for their incapacity to identify future shooters despite clear warning signs. We can blame the culture of guns in society or inefficiency of mental health care.

In the end blame is not the solution. The only way to solve the issue is to introduce legislation and funds for the appropriated entities to work, and with that, we could aspire to change people’s minds. If you say: “don’t blame the gun, blame the shooter,” ask yourself: “What if the shooter could not have the gun in the first place, should we have to blame someone?”

Santiago Robledo, born in Colombia (the country – not the dual degree) and raised in sunny southern France, is now in rainy northern France as a first year student. He enjoys writing and all sorts of outdoor activities, despite social media and French pastries also taking a lot of his time. Thinking Out Loud runs once a month.