North Korea and the Winter Olympics: is Kim’s Regime Really Saying “Nice to Meet You”?

By The Sundial PressMarch 3, 2018 No Comments

This Sunday marked the end of the 2018 edition of the winter Olympics in Pyeongchang (not Pyongyang), South Korea. One of the highlights of the closing ceremony was the pairs figure skating exhibition of North Korean duo Ryom Tae-Ok and Kim Ju-Sik, which seemed to be a hit with the public. The music chosen for their performance, “Nice to meet you”, and the apparent smiles on the athletes faces marked what many praise as a successful détente effort by North and South Korean officials during the games. But pundits spent the past month warning of a “charm offensive” and a “bluff” on behalf of Kim Jong-Un and his cronies. Are they right? 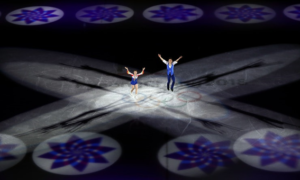 2017 ended with threats of “fire and fury” by U.S. President Donald Trump to North Korea, and 2018 started in a similar manner. In his annual address, Kim Jong-Un boasted that he had a nuclear button on his desk, calling it a “reality, not [a] threat”. Trump tweeted back at him that he had a bigger and better nuclear button of his own. Aside from playground talk, South Korean officials have unsuccessfully tried to call the North through a hotline for two years in the Panmunjom village, one of the only border posts between the two Koreas where officials can meet in person for talks. As Ri Son-Gwon, head of the DPRK’s delegation joked, relations between the two Koreas are “more frozen” than the winter weather.

But Moon Jae-In, South Korea’s president, saw an opportunity to relax tensions and start eventual talks on thwarting the North’s nuclear program with the approaching 2018 Winter Olympics in Pyeongchang, only 50 miles south of the border. The result of Moon’s first efforts saw Kim Jong-Un extend an olive branch to South Korea in his annual speech, wishing to start “urgent” talks on the DPRK’s participation in the upcoming Olympics. In only 48 hours, the hotline in Panmunjom was restored and officials later met there to successfully negotiate the North’s participation. Pragmatically, the White House postponed joint military exercises with South Korea for after the games.

Both sides agreed that the North would not only send athletes but also officials, reporters and its notorious cheer squad. Nearly four in five South Koreans supported the North’s attendance in the games to relax tensions. Further on, it was announced that Kim Yo-Jong, Kim’s sister, would attend the opening ceremony, Kim is known for being the person Kim Jong-Un has the most confidence in. Korean athletes also paraded under the same flag of a unified Korean peninsula, and a joint women’s hockey team was formed.

The opening ceremony of the games was surreal for many, with Kim and Ri sitting only inches from U.S. Vice President Mike Pence and his wife. But a frosty faced Pence did not applaud or stand up for the Korean team and ignored the North Korean delegation, a sour reminder of recent tensions. Conservative movements in South Korea criticized President Moon for too eagerly “rolling out the red carpet” for the North Korean delegation. But South Korean officials admitted to CNN’s Paula Hancock that the various meetings held exceeded their expectations. So much so that Kim’s sister hand delivered a personal letter from Kim Jong-Un himself to Moon, inviting the South Korean president to come to Pyongyang for a visit. Kim wished for better relations with South Korea in tandem with better relations with the U.S. No official response was given to the invitation. 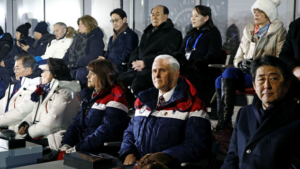 VP Pence sat next to his wife with Moon Jae-In on the left and Kim Yo-Jong on top. Source: Getty Images

Yet South Korea and its allies still have doubts on the North’s intentions. As Jung H. Pak of Brookings Institute said, Kim Jong-Un’s regime watches us as much as we watch it, with a substantial amount of North Korean officials reading through foreign press to monitor the country’s image abroad. Experts warn of the regime’s tendency to open itself to dialogue when sanctions leave it short of foreign currency only to break its promises later. For North Korea, participating in sporting events is a “pseudo-concession” which costs the regime nothing yet boosts its reputation. On top of this, it uses telegenic people such as Kim Yo-Jong, Kim’s sister, or Ri Sol-Ju, his wife, to give a softer, gentler image of the regime. Several observers also denounce the regime’s openness to Moon as a tactic to drive a wedge between South Korea and the United States. China and others could relax implementation of sanctions as they observe a warming of inter-Korean ties, but North Korea might still end up disappointed with U.S. rigidness towards sanctions.

U.S. Vice President Mike Pence’s refusal to engage with the North Korean delegation during the opening ceremony spurred North Korean officials to cancel their meeting with him the following day in Seoul. Pence called out the regime’s neglection of human rights and warned of maximum economic pressure on North Korea as the U.S. Treasury department published a new set of sanctions which president Trump called “The heaviest sanctions ever”. Mr. Kim accused the United States of an “act of war”. For the Olympics’ last days, the White House sent Ivanka Trump to Pyeongchang, where the president’s daughter reportedly reminded Moon of the need to enforce sanctions and only give leverage to North Korea for more talks once it shows concrete steps towards denuclearization. North Korea will only talk of denuclearization with the United States as it is also a nuclear state. It showed relative openness towards talks but U.S. officials gave no response to these declarations.

Back in South Korea, Moon got an unexpected backlash at home not only from conservatives who accuse the government of organizing the “Pyongyang Olympics”, but also from young liberals. In an interview with The Economist, Kim Ju-Hee, a 23-year-old living in Seoul, declared, “I feel like sports has been manipulated for political ends.” Indeed, many in South Korea protested the last minute unilateral decision to create a unified women’s hockey team, which hindered sporting performances in the games. Moreover, South Koreans feel ever less connected with their Northern neighbors, with the pre-Korean War generation which lived under a unified Korea getting older. Southerners are ever less willing to reunify according to polls. North Korea’s emotional overtures through sport and musical exchanges seem to affect older generations more than anything.

Time is of the essence for South Korea’s president. As he seeks to build on this month’s détente, Moon must welcome maximum pressure put on North Korea by the United States to make the hermit kingdom serious about denuclearization while grasping every opportunity Kim gives for dialogue. He must also convince younger South Koreans of why the North matters. As for Washington, it would do well to support South Korea’s initiative to gain better knowledge about North Korea’s intentions and maybe even directly talk to Kim’s regime. Coming back to the closing ceremony, which was attended amid protests by a former North Korean spy master, Kim Yong-Chol, Korean athletes paraded together but with their separate uniforms and flags, hopefully not a sign of “business as usual” again in the Korean peninsula.

The contrast between the opening and closing ceremonies may signal a comeback to pre-Olympic tensions. 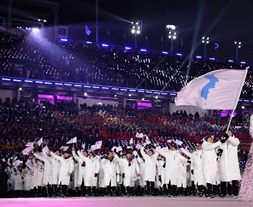 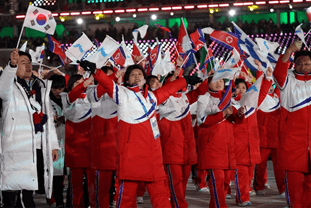