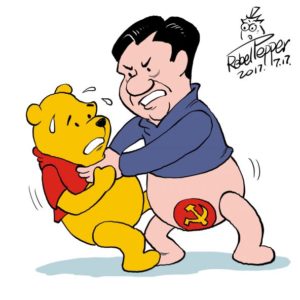 Chinese netizens love a good joke. And when Xi Jinping was compared to Winnie the Pooh, the joke seemed too good to miss. The discovery brought on an onslaught of memes and stickers that circulated on the Chinese web comparing Daddy Xi to Winnie the slow-witted, loveable bear. China’s most censored picture in 2015 was one of Xi Jinping standing up through a parade car that was paired with the image of Winnie the Pooh’s toy car.

But by July of 2017 the jokes were over. Searches of Winnie the Pooh drew up pages which read: “warning, content is illegal”. Image searches found no results.

This incident shows two things: firstly, that when anonymous, Chinese netizens are cynical and ironic about their government and society, even though publicly nobody would own up to such sentiments. Secondly, and more importantly in light of recent events, the Chinese Communist Party does not deal with issues like a slow-witted, loveable bear. Their responses are swift and merciless.

That is why it should not come as a surprise that at the end of last month Xi Jinping made a move to change the Chinese constitution, abolishing term limits and thus extending his rule indefinitely. It is unclear how long that means he will be in power, but as Professor Steve Tsang, director of the Chinese Institute at SOAS, said to Time Magazine, “Xi has already created a lot of enemies… Can he be sure that after he has retired… that he and his family will be left alone?” The threats that face Xi after retirement mean that life-long rule may be his only option, even if it was not his original intent.

The responses have been a mixed bag. None more complex than within the EU itself, which makes sense considering the union’s history with China. On the one hand you have leaders like Merkel and Macron who in June of last year pushed for EU legislation that would demand stricter scrutiny of Chinese investments in the region. Leaders like these fear that the economic influence China has over the EU will bleed into political influence. Angela Merkel, accepting her role yet again as Chancellor of Germany, stated this month that Germany’s relationship to China was of more importance to her nation than that of immigration.

The second reaction in the EU has been complete silence, which is not surprising. The EU law to impose stricter scrutiny of Chinese investments was not passed in 2017. Countries that opposed the law included Portugal, Greece, Malta, Finland, Sweden and the Czech Republic. Interestingly, prior to this proposed legislation, China’s COSCO shipping company had taken over the Greek Port of Piraeus. Likewise, Portugal had, according to Politico, received over 5.726 billion euros in Chinese investments  between 2000 and 2016. And my country Sweden, whose minister of commerce Ann Linde insisted in January that Chinese influence in the EU was exaggerated, has since sought increased business with the nation. Not only that, but as I write, plans are being made for the building of Sweden’s largest dock by a Chinese construction company that has ties to the highest levels of the Chinese government.

Maybe my attitude seems toxic. After all, dividing nations into good and evil is the attitude that brought us close to nuclear annihilation during the Cold War. All nations are complex, no nation is solely good or evil. Labelling China as evil is an oversimplification that can cause dangerous and unnecessary tension. Instead we have to take into consideration all of the players that are to blame, and these extend outside of China. I would go further to say that the whole world is complicit in Xi Jinping’s power grab. When the Swedish bookseller Gui Minhai was kidnapped by the Chinese authorities without a trace, no public statement was made by the Swedish government until 800 days after his arrest. This is not a question of Cold War-styled labels of the west as good and the east as evil. We are all evil if we allow financial incentives to outweigh the security of our own citizens and Chinese citizens too. Sweden chose economic ties to China over the protection and freedom of expression of their own people. Sweden is complicit.

That is the main reason why Xi Jinping’s extended rule is so worrying. Not simply because Xi Jinping has more power in China, but because his power in the world is ever-growing.

It’s easy to feel nervous with an event as big as this, in a situation where there is not one person to blame, but a complex web of power and influence that seems to make the problem unsolvable.  But there is one thing that always gives me hope, and that is the Chinese Winnie the Pooh netizens, shaking things up one subversive meme at a time. Of course I don’t believe a controversial sticker will change the Chinese regime in any way. But it points to a cynicism and humor that is vital for people to stay free. If you can joke about something, then you can still create your own bubble of self-expression. Even if that bubble is blown by a loveable, slow-witted yellow bear.