Hit enter to search or ESC to close
Foreign AffairsHomepageUncategorized 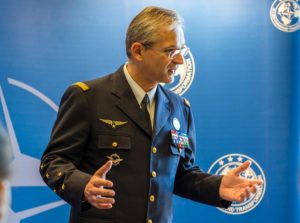 Last Thursday, NATO Secretary General Jens Stoltenberg presided over the release of the alliance’s 2017 Annual Report, a 120-page document outlining the steps that it has taken to adapt to and meet new challenges. Sciences Po students who attended an exceptional briefing on campus earlier this month by NATO’s Supreme Commander for Allied Command Transformation, Gen. Denis Mercier, had been provided a lens through which to understand this event.

Speaking to an audience of students and Reims community members, the former Chief of Staff of the French Air Force, who had been stationed in the city earlier in his career, described his priorities for the branch of the transatlantic alliance charged with keeping NATO partners and the institution’s command structure prepared to respond to new challenges. While Mercier’s outlook was positive, it hinged on action by political leaders to meet today’s most pressing challenges, especially in the digital sphere.

A world “no longer complicated, but complex”

Mercier described a world facing a web of overlapping and difficult security challenges: From Russia’s misadventures in Ukraine and Syria to the emergence of cyberspace as a new domain for conflict between states and non-state actors, the threats facing peace and security in our time have revealed themselves to be complex, rather than complicated. This key distinction reflects that throughout the alliance’s history while security was hard to achieve — think the daily threat of conventional war on the European continent — policymakers had a complete understanding of the array of flashpoints that existed. As the international security environment evolved, first after the fall of communism in Eastern Europe, then after 9/11, and most recently following Russia’s annexation of Crimea, so too did approaches for evading disaster.

Today, said Mercier, “we can look at trends, but we will be surprised”. Building resilience through greater strategic awareness and looking at the world globally, he argued, is the best way to maintain security in an unpredictable context. And indeed, the 2017 Annual Report reflects this priority, mentioning resilience no fewer than 26 times. The word “deterrence”, which was NATO’s main mission from 1948-1991, is mentioned just 28 times. A new approach for an uncertain era.

The ongoing dispute over Russia’s alleged use a nerve agent to poison a former Russian spy and his daughter in Britain illustrates this point: While the United Kingdom and Russia have just traded diplomatic blows to this point, some have wondered whether Britain would move to invoke Article V of the NATO Charter. The coming international security crises might be predictable to the extent that they are based on existing challenges, but the sparks that set off fireworks will be difficult to foresee. This has always been true, but the especially complex nature of today’s situational environment makes it more so since non-state actors and hybrid warfare techniques muddy these questions.

For Mercier, “the aim of NATO today is to avoid crisis by all means”, only resorting to force when deescalation fails.  To successfully do this, the alliance relies on its network of global partnerships. Conflagrations no longer occur in one exclusive theater; they are multifaceted and geographically diffuse, making NATO’s partnerships with 43 countries across the world essential to building resilience. He stated that NATO cannot do everything on its own; adopting a regional approach to Iraq will be on the agenda at this year’s annual summit in Brussels. Broader geographic dispersion and situational awareness makes it easier for NATO to do its work in conjunction with allies and international organizations.

Mercier repeatedly returned to the security challenges that are emerging in cyberspace, which he characterized as “a permanent crisis, even a crisis that can threaten our democratic processes.” In the face of threats to critical infrastructure, democratic elections, and the effectiveness of allied militaries, the alliance has been stirred to action in this new arena. NATO’s own networks face 200 million “incidents” each day, which is not even to say anything of the magnitude of the threat to the allied government networks that it defends.

As a result, NATO must adapt and increase its responsiveness to these dangers, a responsibility that is a large part of Mercier’s job at Allied Command Transformation, but before the 2016 Warsaw Summit, there was no NATO cyber structure. At the 2014 NATO Summit in Brussels, the alliance officially made cyberspace an operational domain like land, air, maritime, and space. And following Warsaw, the alliance created an integrated cyber center that links NATO members, some partners, and large non-government organizations. The goal here is federation rather than centralization: One test in Estonia that linked German and Portuguese cyber capacities demonstrated that the former is a stronger approach. But countries are often reluctant to participate in a pooling of cyber operations for reasons of confidentiality.

Another priority is working with industry. Mercier fears that by neglecting its role, NATO will lose the future. Following a visit to major tech companies in Silicon Valley, he realized that their success in mitigating cyber threats stems from the view that no single actor holds the keys to solutions—these big companies don’t even contract work to each other in this area; instead they just cooperate. Mercier also attributes their success to a certain strategic awareness granted by their global character and the resilience that grows from their ability to adapt.

The tech giants are natural allies in this effort—NATO’s cyber strategy relies on partnerships with business and think tanks in addition to governments. Though they hold different goals, they inhabit the same environment and are stakeholders in its stability. Most important, though, they possess capabilities that NATO lacks.

Adapting to these new threats requires a paradigmatic shift in how the alliance views security. Mercier argued for a shift to design thinking, a deep understanding of a particular problem rather than a solutions-oriented approach. Transitioning to a perspective like this allows decision makers to understand the central questions below the surface problem. When thinking about the replacement of AWACS aircraft, Mercier realized that the real question facing his staff is how to build a digital architecture that enables surveillance and control of different assets on the battlefield —an “internet of things for the military”.

This example raises a key concern: Where do humans fit in this new digital command structure? A premium must be placed on the development of human capital because, said the general, even with the advent of autonomous systems, “the heart of it will be the man in the loop.”

This human component is the crux of the problem. What happens when allied forces are engaged in an operation and different militaries have different guidelines on how to use autonomous systems on the battlefield? How much will militaries authorize machines to do? And to what ends will human operators harness data? Interoperability will falter if these questions are not resolved, but moreover, Mercier fears that a delay in addressing these questions will lead to an advancement of technology without corresponding progress in human institutions.

For Mercier, these concerns aren’t technical but instead political: NATO governments must discuss the rise of new technologies or otherwise accept strategic obsolescence. It’s a difficult topic for the alliance, comprising 29 member states with different approaches to Artificial Intelligence.

Mercier will have his work cut out for him when he arrives in Brussels this Thursday to raise the issue at a meeting. But as Stoltenberg concluded at a recent press conference, “The world does not stand still. And neither does NATO.”