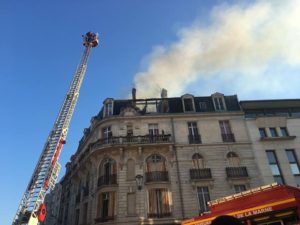 On Saturday evening the building at the corner of Rue du Barbâtre and Rue de Contrai caught fire. The apartment block, a survivor the First World War – which leveled 70% of the city – finally succumbed to a common house fire. Firefighters were called at around 5:00 p.m., and this Sundial Press reporter arrived on scene at approximately 5:30 p.m., after noticing the billowing smoke.

There was a crowd of close to 100 onlookers assembled on the street. Among them was the owner of the ground floor corner store “Alimentation Fruit-Légumes” and a woman who was video chatting the owner of the building. The store owner said that the top apartment was unoccupied, and that the fire was probably caused by a “coup de chaleur”.

Firefighters were on scene, accompanied by at least three fire trucks, but while the fire burned most intensely, the firefighters only sprayed water for about 10 minutes. After over half an hour of no more water, myself and other onlookers began to question why. Some speculated that this could be due to the strong wind at the time. Some were more impatient, one onlooker stated: “I have a lot of questions, and most of them are: why aren’t they putting out the fire.”

The air was smokey and the smell of burning building was everywhere. Onlookers were allowed so close to the scene that they could hear the crackling of the flames on the roof, and some of the debris fell very near the crowds. 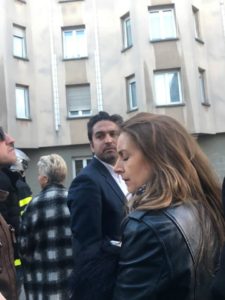 By 6:00 p.m. the roof had been completely destroyed. Police finally established a cordon four minutes later. By 6:15 p.m., authorities gained control of the situation, although there was still some smoke and flames. The mayor of Reims, Arnaud Robinet, had arrived, looking impeccable as always and was talking to tenants of the building, as well as the owner via video chat, and policemen.

Staff at a boulangerie across the road had not heard anything and did not know anything about the fire’s cause. There were unconfirmed reports that an explosion had occurred right before the fire started. The owner of Poker’s Pizza, just down the road, said that it was caused by gas, but at the time of publication an official cause is not clear.

Behind the cordon lines, people who lived in the building bemoaned the fact that they could not go home and wondered if they would be able to sleep there that night. Neighbors along the street poked their heads out of windows to watch the chaos, apparently unevacuated.

By 6:30 p.m. police had moved the cordons further back to allow one of the firetrucks to access the southeast side of the building. The crowd began to disperse, and fewer flames were visible; most of the area was simply smoldering. At 7:45 p.m., smoke was still rising off the building, and emergency vehicles were still on-scene.