By Camille IbosApril 2, 2018 No Comments

‘You’re living in America, at the end of the millenium…’

I’m sure that I’ve already heard these world-famous notes, but I never made the link between them and the musical “Rent” before Saturday. When I entered the Old Refectory, turned into a theater for the occasion, I knew nothing of this musical but what I could guess from the colorful poster that has invaded the campus’ screens, and also that it was vaguely related to AIDS, and that it was not good enough for me, daughter of a musicals-fan Mom, to know it by reputation.

Rent tells the story of a group of Bohemian friends in a borough of New York plagued by AIDS and poverty. Mark (Ray Ontita), aspiring filmmaker, and Roger (Martynas Bagdonas), HIV-positive songwriter, struggle with their former roommate, Benny (Maria José Linares), who achieved his American dream and ask them for a rent they cannot pay. But beyond this pair of endearing young men, it is also the story of HIV-positive prostitute Mimi (Benedetta Schiavon) and drag-queen Angel (Manon Mathis) whose love relationship with Collins (Antony Rossi) echoes that of the businesswoman Joanne (Justine Sène) and her wild childish artist girlfriend Maureen (Ieva Soriuté), who happens to be Mark’s ex. Under the spectrum of AIDS and poverty, every member of this group is an artist in his or her own way, lives for today as so many of them could die before tomorrow. Rent is a story of friendship, love, despair, hope, tolerance, carelessness and life under the shadow of death, but within a framework full of colors, emotions and positivity. It manages the outstanding achievement of making laugh and cry at the same time, while giving you an even stronger will to naively ‘change the world’ as soon as you get out of the room. 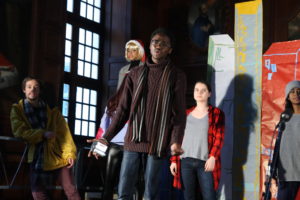 But what was even most extraordinary with this production of the musical was that it enabled us to get a glimpse of the unexpected talents of neighbors, triplette classmates, student representatives, or people that we meet everyday in the corridors without getting any idea of their acting, singing, or dancing skills. Among the 13 artists on stage on Friday and Saturday, all of them proved they were there for a reason, by the remarkable generosity they gifted us with. We could see, thanks to little details, to tender smiles, to sweet looks, to enlightened faces, that they were all having fun together and were acting 100% for us to get a bit of this magic. 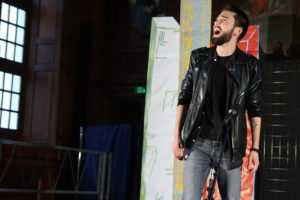 I appreciated every moment of it, but if I had to choose a few in the two hours that the show lasted, I’d point out three. The first award goes to the song “Will I?”, interpreted by the whole company and that was one of the most emotional moments of the musical. All of the artists were holding hands two by two, with the two voices of every pair getting along so well together that I saw many people in the public closing their eyes before I did the same. I liked it as a way to hear a bit more the voice of those who had important but not central roles, such as Margaret Hubacher or Helena Bauer-Mitterlehner. I also particularly loved “Tango Maureen”, with a Ray Ontita (Mark) and a Justine Sène (Joanne) at the top of their shape, embodying the confrontation of two worlds, him in a chill jumper and her in her businesslike suit, united by the love they feel or used to feel for the same woman, Maureen. And Maureen… we heard about her without seeing her for most of the first act, and there she came, on a song whose topic was essentially about a cow jumping over the moon. Promising, right? One cannot talk that much about a character during a play without the audience getting super-hyped, which implies a huge risk of being disappointed. But Ieva Soriuté literally jumped over the moon of our expectations as easily as she made a perfect cartwheel with ten-centimeters heels, which I used to think was not humanly possible. Her assumed craziness, sharp humor, and success in getting the audience invested honored the brilliant direction of the team. Indeed, everything was well-organized, with little means but  goodwill; when the settings had to be changed, there was always an actor singing in the audience to catch our attention, they did not hesitate to break the Fourth Wall, and even the way they would switch off the light to indicate the end of a song was very cleverly thought. Artists, congratulations! 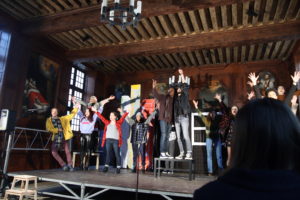 Such a performance could not have been achieved without a great amount of work, “two hours of rehearsals a week during the first semester, four hours a week during the second one, and even more during the past two weeks”, explains Constance Dias, 1A Euram who played various roles in the musical. “The biggest hurdle was probably scheduling”, adds Caroline Rice who directed the musical. “With this big of a cast it was impossible to get everyone together at a given time. There were always times where some people had to catch up to others or find alternate times to rehearse”.

Lots of work, but for a great cause. Indeed, Rice chose this play as it is a “great combination of energetic, serious and optimistic. It deals very poignantly and truthfully with AIDS but also with drug addiction, death, friendship, LGBT+ issues, and making the most of every day without worrying about the future.”

“Now that it’s done and we’ve shared this message, we feel like something has been accomplished’, approves Maud Guérard, 1A Euram who also held two roles.

Many of Rent’s actors were taking part in a musical for the first of their life, such as Oliver Zhang, 1A Euram who used to sing in choirs back in China, or Benedetta Schiavon, 2A Euram, who played the central character Mimi. At the beginning of the year, all of them auditioned in front of Rice, the co-director Lina Messaoudene, DramaThalia President Denise Mensa, the music director Justine Sène, pianist Marina Starck and, assistant director Clément Francony.

And then, what’s next? Rice, who will leave Reims for her third year, hopes that another musical will be organized, since “there are lots of talented 1As in the cast and it would be great for them to work together on another musical”. Which one and directed by whom? The decision is yet to be taken, but without any doubt, the great memories from Rent will remain, not only for the audience but also for the actors that want to thank Caroline and the whole team for their outstanding work in a friendly and fun atmosphere.