The Bold and the Beautiful: Art Against AIDS Fashion Show

By The Sundial PressApril 9, 2018 No Comments

The official start to Gender and Sexuality Week 2018 at Sciences Po sashayed in with flair. In a first time collaboration with L’Ecole Supérieure d’Art et Design (or ESAD), Ex Pose and SAGA hosted a show that harkened back to the underground LGBT and drag scene of the 90’s, seamlessly melded with architectural modern inspiration. Both womenswear and menswear were featured in the ten look capsule, and many looks were designed to blur the boundary of traditional gender norms. The energy both backstage and in the audience was palpable as people waited in anticipation for the show to start. Clad in completely student-designed and produced looks, models casted mostly from Sciences Po strutted down the runway sporting classic 90’s footwear like Converse, Vans, and Doc Martens. Their looks were highlighted by strobe lights and juxtaposed against the historical grandeur of the walls of the Old Refectory that surrounded them. 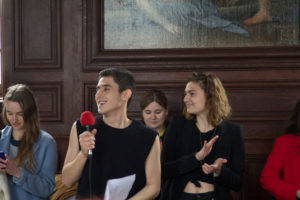 Antoine Rabiet and Kaja Grujic of Ex Pose opened by explaining the intentions behind the show and stated the designers wanted to express the frenetic energy of the AIDS crisis as well as the isolation many people in the LGBT community faced due to homophobia and social stigmatization. They also wanted to promote safe sex and highlight the fact that AIDS remains a contemporary issue. Besides raising awareness, designers also felt a strong desire to give to the cause. They designed two tee shirts featured in the show on sale next week in the glass hallway with all profits benefiting French association AIDES, which works to spread awareness and limit the reach of AIDS. Most importantly, the designers intended the show to be a celebration of the resiliency and joy of the LGBT community and show that beauty can come from dark places. 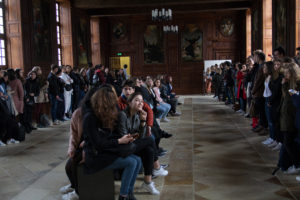 The opening number was a sculptural piece that played with transparency and the human form, resembling waves enveloping the body. Motifs and inspiration were drawn from the physical form of the AIDS virus and its mutable nature. Designers were bold and diverse in their use of textiles, which included painted denim, tulle, feathers, vinyl, photo-transfer repurposed fabric, and more. The use of accessories was also notable, with playful nods to 90’s and Y2K culture with embellishments like Lisa Frank-esque stickers on bare skin, sunglasses straight from the Matrix, and elaborate neck pieces. There were also more modern references, like a refashioned Louis Vuitton belt bag. Models were styled minimally in terms of hair and makeup. Their natural features were emphasized with a glossy editorial finish and gave an impression of vigor. The synthesis of the elements was ultimately quite organic, and was raw yet polished in presentation.

Student designers from ESAD, Alix Lalucaa and Apolline Millat said of their black jumpsuit, “It highlights the banalization of HIV; it’s simple in silhouette, neutral in color, it fits the body like a glove and offers an elegant vision that breaks with stereotypes about people living with HIV. It also expresses the modesty, shame, and fright stemming from public opinion by creating a breach of intimacy; the movement of slits shows some skin without revealing too much. Similarly, the collar emphasizes this modesty by protecting the neck and the face”.

The closing number was one of the most impactful looks of the show. At first, it appeared to be a clean grey suit, but the real shock factor came from the back of the jacket, where the word “FAGGOT” was emblazoned in bold silver mirror lettering. It stood as a striking reminder of the continual marginalization of LGBT people but also the reclamation of their agency and power. The collection was a true labor of love and stood as a celebration of the adversity, pain, and joy of the LGBT community. The finale was met with fierce applause.

Lara Fakhry, an attendee of the show, thought the show challenged gender norms and would not have been possible without the collaboration with ESAD, “Sciences Po is a pretty progressive school but I don’t think many guys here would have dared to imagine, create, and wear some of the looks we saw today. I liked how the show pushed boundaries. I also thought the AIDS awareness message was important, as it’s often lost in the modern dialogue around gender and sexuality.”

Rabiet and Grujic, senior members of Ex Pose, were at the helm of the collaboration between ESAD and SAGA. The idea was conceptualized during the time of World Aids Day. “I know Ex Pose is known for their more couture and highbrow fashion show at the end of the year, so I wanted a different type of show that incorporated more diverse and underground styles. The intersection of activism and fashion is also something we wanted to explore” said Rabiet. Grujic added, “We wanted to feature student work because it comes from a very genuine place and we ourselves wanted to be involved intimately with the design and productions of the looks. The talented students of ESAD were a natural fit for this project and they were very excited about participating. We are quite pleased with what we were able to create together and thank them for their great teamwork!”

When asked about the challenges of producing the show with ESAD, Rabiet and Grujic cited language barriers and differing school schedules as the largest challenges. Another difficulty they experienced was bringing conceptual ideas to life, as none of the team was necessarily skilled in sewing and creative fixes were adopted to produce their looks. I was privileged to have an inside look during each step of their collaboration as a member of Ex Pose. The transformation from moodboard to finished pieces was a joy to observe as all of their ideas jumped off of the page and down the runway. The final show was just as beautiful and impressive as they intended. 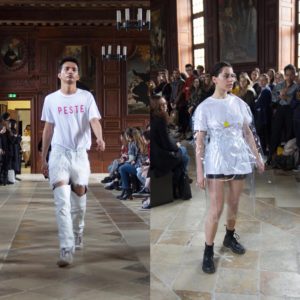 A highlight of the entire collaboration was the design and production of the two shirts that will benefit charity. ESAD designers Laurane Simpere, Agathe Rivet and Louise Malclès described the creative process, “To begin, we brainstormed words related to AIDS. One that caught our attention was the term “peste rose”, used by the National Front. The word plague is very strong and contrasts with pink, which is thought of as gentle and beautiful. Nevertheless, it remains a painful label and represents a dual-headed fight. One battle is with the virus itself and the other is with an often hostile society. By writing ‘Peste’ on our shirts we wanted to eliminate stigma. The second design is more humorous and cheekily subverts taboos. The goal was to emphasize and celebrate gay sexuality but also protection and safe sexual practices”.

Shirts in the two featured styles will be sold next week in the Glass Hallway and will cost 10€. All profits will benefit French association AIDES, which works in spreading awareness and helping limit the reach of AIDS.