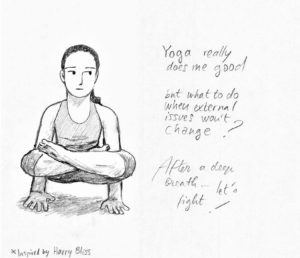 Stress. Five essays to hand in, an internship to procure, a student loan slowly growing in size, a kettle of tea screeching through the mist of anxiety and the smell of a pile of unwashed dishes in the sink. Mental health is not a joke, and nor are growing symptoms of anxiety, depression and stress worldwide – especially in the milieu of Western universities. Sciences Po knows the mounting pressures an expensive and demanding education, combined with fears of tight post-graduation job markets, can exert on students. As a good university, it has sought out means to improve the well-being of its students by offering the traditional healthcare package:  psychologist, general practitioner etc, as well as more unorthodox and trendy solutions: cats, wellness and yoga.

Whereas the presence of therapeutic cats in campus libraries can be discounted as a successful April Fool’s prank, yoga and the different wellness workshops offered by Sciences Po could actually make a difference. I take yoga classes in Reims and meditate regularly; they most definitely have positive effects. Techniques focused on breathing, creating a sense of heightened awareness, of acceptance, and of presence have become increasingly more common in the field of healthcare. Scientific research into these techniques, crassly to be oversimplified as mindfulness from here on out, has proven its efficiency in increasing mental health and in combating anxiety. What’s more, HR consultants and relevant magazines hail it as a tool for increasing worker productivity. It’s promoted as a tool for personal growth and self-discovery as well as a technique to get better results.

However, the fashionable promotion of mindfulness techniques – very fitting to the modern image Sciences Po is trying to project – has its problems. Here, I take issue precisely with the word technique instead of practice. Yoga and zen-meditation are both incredibly old practices arising from Hindu and Buddhist tradition. Mindfulness, on the other hand, is the operationalization of techniques used in those practices; their removal from a broader context. That alone is no crime, and I’m not here just to scream cultural appropriation at silly Westerners. However, I would like to point out that the extent of today’s fetishization of “Eastern” wisdom – a trend that really took off via the post-war landing of Buddhism in American beatnik circles – would probably make Edward Saïd roll in his grave.

Interestingly enough, one of the best examples of an operationalized mindfulness practice went-wrong is from Japan. During the Meiji Restoration, Japan underwent a momentous technological and cultural change. Shinto became the official (civic) religion, and Buddhism had to change to fit the new state agenda to escape persecution. It ended up becoming the central concept for an idealized form of a medieval Japan that served as a partly invented historical basis to justify Japanese superiority and imperialism. As Buddhism crashed into Western capitalism and modernity, things changed. Zen masters were brought into factories to improve productivity, into armies to instill discipline, and the Buddhist establishment condoned imperialist aggression and theories of Japanese exceptionalism. Mindfulness techniques liberated from their ethical and metaphysical framework had devastating effects in the field. A militarization of mindfulness is just one example of operationalization gone wrong.

Let us turn back to mindfulness at work and in universities. Mindfulness increases individual performance, yes, but what about the flipside of the coin? Is it truly a panacea? First, it should be noted that there really are negative effects to heightened awareness. It can weaken one’s sense of identity, strengthen PTSD symptoms, or trigger panic attacks. Note the conditional; the techniques work without problems for most people, but at times the pill might be a bitter one to swallow. Second, mindfulness cannot be a replacement for real healthcare. Pre-presentation breathing exercises can stabilize otherwise shaky hands and build confidence. Weekly yoga classes can reduce overall stress, but they can’t necessarily deal with mental illness. Proper treatment should include therapy and professional consultation.

The political component of the problem is subtle, but it makes it all the more important. By offering classes focused on personal well-being, companies and universities shift responsibility to the individual. They operationalize the techniques of the practice to seek higher productivity and profits, which is only logical in our current environment. The real danger lies in broader cultural change. It strengthens the grip of employers on employees, by making a mindful attitude a requirement. This is biopower in action: wellness becomes commodified, measured and individualized. Mindfulness classes join the group of CV must-haves. It is made into a technique aimed at improving productivity and speed, instead of a practice aimed at improving presence and promoting a certain slowness. It seems that the loop feeds back into itself in some kind of an absolute perversion: The technique used to alleviate stress accelerates the mechanisms causing it.

In reality, mindfulness can reduce losses caused by stress-related problems, but it doesn’t treat the source of increased anxiety. In the most banal example, meditation classes would probably improve the productivity of precarious office workers in a bureau next to a pair of train tracks – but so would investing in soundproof windows or paying living wages. Systematic problems still need to be dealt with through collective action. Putting one’s own house in order first is an inviting maxim, but cleaning up the house seems inadequate if there’s no externally supplied electricity or running water.

Do yoga, be mindful, learn useful techniques, but don’t let them become a cure-all. As childish as it sounds, never stop creating and demanding a better system. Perhaps use that enhanced presence to figure out the root causes, and find solutions to the problems they create, but in any case, don’t bear the weight of the world on your shoulders, even if it is easier to bear after a yoga class or two.

Miko Lepistö is a first year student from the bowels of Helsinki. The only student living on the notorious “other side of town”, as well as an avid biker due to necessity. Looney Truths runs once a month.