Ireland and the EU: A Match Made in Heaven? 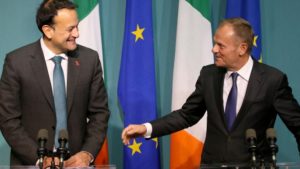 Britain always had a troubled relationship with the EU. We know that. Ireland doesn’t, and never has. Why?

How can a country that appears similar in so many ways to the UK have such a different experience with the same organization? Now that the Republic of Ireland is set to become the only English-speaking nation in the European Union, the perfect time has come to explain just why that is the case.

On the brink of becoming the sole torchbearer for the Anglophone world within the 27-member bloc, Ireland now occupies a position that seems disproportionate to its size. The enormous hole left in the union by Britain’s absence will be partly filled by Ireland, as the Emerald Isle’s approach to EU membership has long been a mirror of its nearest neighbor. Both Ireland and the UK have hitherto emphasised the economic union represented by the EU while trying to limit its expansion into ever-wider facets of European political and social life.

What is striking at the outset is Ireland’s overwhelming support for the EU. Based on a 2017 European Commission poll, 58% of Irish citizens have a positive view of membership, a higher percentage than any other member state. An impressive 77% are optimistic about the EU’s future, and 79% want to remain in the EU. Quite the contrast then with their British neighbours.

How can such strong pro-EU sentiment be explained? Two factors go a long way to explaining this. Firstly, there is a strong awareness among the Irish of the vital importance access to the Common Market has for the island’s economy. Led by industries such as pharmaceuticals, IT and financial services, Ireland’s financial well-being is inextricably linked with the ability to freely trade with other EU nations.

After an extremely challenging economic history characterized by widescale poverty and absence of industry, Ireland’s economy experienced extraordinary economic growth in the 1990s and 2000s, earning the title of the “Celtic Tiger”. Led by an explosion in both the quantity and value of exports, Ireland’s success stemmed from attracting large American MNCs to establish bases in a state that possessed a highly-educated, English-speaking workforce. The most decisive factor in this boom was, unsurprisingly, the tariff-free access to large European markets such as those of France and Germany.

Secondly, Ireland’s attitude to the EU as it relates to its national prestige can be seen in direct contrast to that of Britain. For Ireland, accession in 1973 meant not only breaking dependence on Britain as an export partner, but also emerging more decisively out of the shadow of a former colonial master, and taking a seat at the top European table within the only type of organisation that could offer Ireland that sort of privilege. On the other hand, Britain is generally considered to have long seen EU membership as a sign of its waning influence and loss of empire.

You may think then that Ireland has a close, cuddly relationship with the EU. In fact, it’s not so straightforward. Unique to the entire bloc, Ireland is required by its constitution to hold a referendum on a European Union treaty before the Irish government can enact ratification. As a result, Ireland has held a public poll on every treaty from the Single European Act in 1987 to the Fiscal Stability Treaty in 2012, totaling eight separate polls. All these referenda were passed with relative ease until a shock rejection of the Nice Treaty by voters in 2001. Another surprise came in 2008, when the electorate decisively rejected the Lisbon Treaty. On both occasions, to the consternation of many in Ireland, the voters were asked to cast a ballot a second time. Curiously, both repeat referenda were passed comfortably.

Both Nice and Lisbon met resistance primarily from three rather contrasting groups. Firstly, the treaties were opposed by a collection of relatively small socialist groups who challenged further integration on the grounds that it would harm social protections enjoyed by the working class. Secondly, hostility came from Catholic conservatives who feared that an empowered European Court of Justice could overturn Ireland’s constitutional ban on abortion. Last but not the least, both Nice and Lisbon were opposed by the left-wing political party Sinn Féin, who regarded further integration as a dilution of sovereignty. As a party principally devoted to ending British rule in Northern Ireland, Sinn Féin considered both Brussels and London to be alike in undermining Irish independence, and so were opposed to both the United Kingdom and the European Union interfering in political affairs on the island of Ireland.

This motley trio point to one of the primary reasons for the weakness of Euroscepticism in Ireland; the three main groups antagonistic towards further European integration have close to nothing in common and in some cases despise each other more than the EU itself. The socialists and Catholic conservatives tend to view each other as the principal political foe, while Sinn Féin are resented both by the socialists who reject nationalism, and the Catholic conservatives whose relationship with Sinn Féin has always been strained, owing to the party’s links to the violent Provisional IRA campaign during the Troubles. In addition to those divisions, Sinn Féin have made major moves away from Euroscepticism in the 2010s, both as a result of Brexit and as part of attempts to expand their voting base to “middle Ireland”, representing the average Irish voter and show no interest in Euroscepticism. As a result, the pool of Eurosceptic political representatives has shrunk even further since the last of these referenda. Ireland’s current parliament consists of 158 members, of which only 11 represent Eurosceptic movements.

Euroscepticism at present is strongest in countries where anti-immigration sentiment is at its most potent. Anti-EU sentiment in France revolves around Marine Le Pen’s Front National, in Britain around UKIP and the Alternative fur Deutschland in Germany. Ireland has no such far-right anti-immigration party. These parties on the continent unite voters around the one issue of immigration. With Euroscepticism in Ireland existing among diverse groups with nothing in common, and most significantly lacking a single party to represent this sentiment, it has little impact on Irish politics and fails to capture the imagination of the public.

Here’s something to watch out for though: while support for the EU is strong, voters have long-standing fears surrounding the notion of a federal union. Central to these fears is the concept of an EU army. Ireland, since the state gained independence from Britain in 1921, has maintained a neutral foreign policy limiting military engagement outside the state to peacekeeping missions on behalf of the UN. It is also important to note that Ireland is not a member of NATO. It is very much the case that Ireland is in the EU for the economic benefits, and not for any military purpose. If the EU further deviates from its core objective of economic integration, rising Euroscepticism in Ireland will be something to monitor.

All things considered, the beauty of the EU lies in its success at bringing together a highly diverse range of nations under the same umbrella. Despite the enormous challenges presented by a number of states at the moment, the union can still proudly point to the many successful relationships it has maintained with most members.

The relationship with Ireland certainly shines as one of the strongest of all.