Prime Minister Justin Trudeau: From the perspective of a Canadian student in France 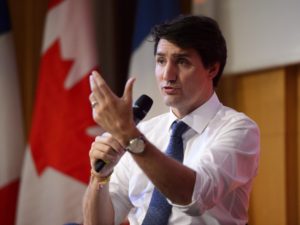 On April 16 I had the opportunity to go to the Paris campus of Sciences Po to attend a talk by Canada’s Prime Minister Justin Trudeau. I had seen him in person during his swearing in ceremony in 2015 in Ottawa, but it is a completely different experience seeing the leader of your country… in a different country.

While he predominantly spoke in French, he used certain English expressions to reiterate his points. The main discussion that was led by Trudeau was on democracy and the similarities of Canada and France in terms of their politics. However, the point of my article is not to dissect the politics discussed at the conference, rather I want to focus on what I observed at the event, and how I felt about certain things.

As the stage was being prepared for the arrival of the PM, I realized that certain people from his team kept going up on the stage and looking at their phones. At first, I thought they were taking photos of the crowd, but I later realized that they kept posing, making it look like they were taking selfies. After watching them carefully for a few minutes I realized that their phones had circular, silver mirrors attached to the top. After they looked at their phones – or the mirror component – they made certain signs to the guys at the top where they changed the lighting reflected onto the stage.

After putting all the pieces together, I realized that these guys were checking the lighting of the stage. If you’re a Snapchat or Instagram user (and poster), you know the difference lighting can make on the way you look. Well, in politics and political representation, the same thing goes and everything matters. The way Trudeau looks is important for his physical representation. Though it may seem like a very insignificant component that should be considered about a leader, the accumulation of those little things like lighting, body language, pace and physical appearance can make a leader go from average to above average – just like that!

If you become aware of the staged lighting or the intentional actions that are portrayed as  natural, you come to realize how people are brought to be persuaded into someone’s politics not with what they say, but how they appear. After seeing Trudeau’s team spend half an hour on lighting, and another half an hour on setting up the seats on stage to a perfect angle, I felt repelled. I have quite a few friends who are more compassionate towards Trudeau simply because of his easy-going character and his”‘good looks”. However this is not politics; it’s deception. By using Trudeau’s appearance to make him more appealing (physically and ideologically), it influences us to move away from seeing the things that matter – his politics.

I don’t identify with a political party, and I don’t have a political idol. I’ve kept myself away from getting too close to a political party because once you endorse a politician or a party, you subconsciously sign up to accept and support most of their decisions. This act alone can be deceiving and could lead you to support causes you may originally disagree with simply because it’s a part of the platform. The best politics is the one with no political spectrum or political parties. Change is possible, but the hardest part of is all is to go through the system you want to change before you can change it. Yet by then, you may already be so blinded by the stage lights that you lose sight of your initial goals.

Emine is an exchange student from Carleton University in Ottawa, Canada. She’s in her third year in Public Affairs and Policy Management, concentrating in Strategic Public Opinion and Policy Analysis. Her passion for creative writing has motivated her to become an opinion columnist at The Sundial Press alongside her undergraduate-blogger career at Carleton University.