The Dragon and the Trident: A Quick Introduction to Sino-Ukrainian Relations in the Era of the New Silk Roads 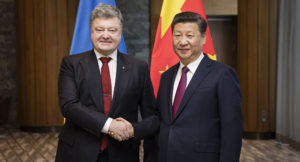 Ukrainian foreign relations are usually analyzed in the context of the troubled interactions with Russia. Yet often overlooked is the Ukrainian relationship with another major global power, China. This article will explore contemporary relations between Ukraine and China, focusing on the economic links strengthened by Ukraine’s accession to the New Silk Roads project. This relationship between a key NATO partner and what the US military identifies as a “strategic competitor” who “[undermines] the international order” is often ignored. The discourse in international media around Ukraine highlights its relations with Russia first and foremost, and then with EU countries, and finally with the US. Here’s why this approach is misguided.

What is the New Silk Road?

The New Silk Road is the media nickname for the “One Belt One Road” project announced by Chinese President Xi Jinping in 2013. The Chinese government is investing over 140 billion dollars into a massive infrastructure project spanning Eurasia, including highways, railroads and maritime trade routes. Ukraine formally joined the project in 2015, and its main involvement looks to be with the Trans-Caspian International Transportation Route. This mixture of rail and ferry transport avoids Russian territory, passing instead through Kazakhstan, Azerbaijan, Georgia and Ukraine.

Both Ukraine and China have economic interests in developing their bilateral trade relationship. Ukraine wants to be less reliant on Russia for exports due to ongoing tensions and conflicts, and the very real possibility of Russia weaponizing energy transfers. China wants to bypass Russia too, possibly considering it a future competitor, and wants a stake in European markets. China also needs food for its huge and increasingly urban population. As a result, China-Ukraine bilateral trade is nearing 10 billion dollars per year. As proof of its involvement in the future of Ukraine and its place in the OBOR project, China recently invested 7 billion dollars in the country. But why is China interested in Ukraine, the second-poorest country in Europe?

First of all, Ukraine is a potential transit hub, lacking only infrastructure. As Chinese Vice Premier Ma Kai stated, “We consider Ukraine as one of the logistics and industrial hubs on the way to the European Union”. Secondly, Ukraine has a “Deep and Comprehensive Free Trade Agreement” with the EU, which means that it would be very easy to bring Chinese goods through Ukraine to European markets. In addition, China sees Ukraine as a way of bypassing Russian tariffs, especially as Ukraine and all other participating states in the TCITR signed an agreement on low tariffs and no examination of train cargo coming from China. Finally, China, with its massive and increasingly urban population, is completely reliant on US agricultural imports and wants to diversify. Ukraine, the traditional “Breadbasket of Europe” is a perfect source of food imports. Indeed, this agricultural focus can be seen in trade statistics from 2016, when the “main exports to China were: ores, slag and ash – 32,5%; cereals – 29.9%; fats and oils of animal or vegetable origin – 26%”. Agricultural exports to China increase by five times in as many years. The head of the Ukrainian Agrarian Confederation affirmed that “In the next two decades Ukraine has a potential to triple its agricultural output”, which would increase the amount of agricultural goods they are able to export. As James Brooke of the Atlantic Council highlights, “Many of China’s projects are related to guaranteeing food exports—port modernizations, dockside silos, highways, a new bridge over the Dnipro, and an offer to build railroad locomotives in Ukraine”. Thus, geographical, trade, geopolitical and agricultural interests drive China’s investment in Ukraine.

China and Ukraine have strong diplomatic relations and often assist each other politically. One key area of cooperation is diplomatic support for each other’s territorial integrity. Ukraine formally recognizes the One China policy, while China refuses to recognize Russia’s annexation of Crime and supports Ukraine’s rule over the Donbas. As Chinese Foreign Minister Wang Yi told his Ukrainian counterpart at the UN General Assembly,”China supports a political settlement of the crisis in Ukraine through dialogue and negotiations on the basis of the new Minsk agreement”. China recognized Ukraine since its independence in 1991, and has maintained bilateral diplomatic relations since then. In 2016 Poroshenko met Xi Jinping to celebrate 25 years of diplomatic relations. Both countries define their relationship as a “strategic partnership”.

Lesser-known and even lesser studied are the state-sponsored cultural and personal social links between China and Ukraine. Ukraine’s Prime Minister recently announced that 2019 would be the “Year of China”. There are also joint programs between the Chinese and Ukrainian ministries of culture for 2018-2022. A recent “Sino-Ukrainian cultural exchanges week, titled “One Belt One Road Week” was held in Kiev. In terms of personal individual links between Ukrainian and Chinese citizens, the role of expat communities is interesting to consider. The Ukrainian diaspora is an important force in many countries, but in China the Ukrainian embassy only registers 540 Ukrainians living in China. On the other hand, there are 30,000 Chinese expats living in Ukraine. Interestingly enough, there is no Chinatown in any Ukrainian city.

A little-known fact is that Ukraine is one of the biggest arms exporters, 11th in the world. China is the biggest importer of Ukrainian arms, accounting for 28% of Ukrainian foreign arms sales. This relationship is important to China, as it has been under a US-EU arms embargo since the Tiananmen Square massacre in 1989. Currently, the Ukrainian defence industry is being bought up by China. Most recently, the Ukrainian company Motor Sich was acquired by Chinese company Skyrizon, prompting worries about technology transfer and reverse-engineering of advanced weapons, as it has happened before. This is not new, as Ukraine helped China make its first phased-array radar system, albeit in this case willingly. China has also hugely benefited from the severing of trade ties between Ukraine and Russia, as the two countries had a tightly-integrated defence industry, and without bilateral trade both needed new export markets which China was happy to provide.

However, it must be underlined that while China supports Ukraine’s territorial integrity diplomatically, it is not going to provide any military support anytime soon, and the Russian-Chinese military defence relationship is at least symbolically strong.

Ukraine and China’s relationship is affected by complex geopolitical interests. While China is “strategic partner” of Russia, China wants a more comprehensive relationship despite its anticipation of future competition. Russia has so far refused. This could be interpreted as an indication that Russia is also already looking ahead, knowing that in the long run, a  China-Russia confrontation is inevitable. However, as Brooke points out, “In Ukraine, China carefully avoids public conflict with its “strategic partner,” Russia”. According to Ukrainian First Vice Prime Minister Stepan Kubiv, China realizes that “Ukraine’s strategically advantageous position on the crossroads between Asia, Europe and Africa is a key to new opportunities for Ukraine’s economic development”. While Prime Minister Groysman has stated that  “China has been and still remains our strategic partner and our strategic priority”. Indeed, as Brooke highlights, “China introduces to Ukraine a welcome geopolitical diversification from the old choice, Russia or Europe”, a third choice which is more attractive than ever, given Russian aggression and Western Ukraine-weariness. This situation should also draw the attention of major outside powers, such as the United States. As Artyom Lukin writes,  “Americans have to decide which region is more important to them — the post-Soviet Eastern Europe (whose heart is constituted by Ukraine) or East Asia”. Perhaps these two regions may be more connected than initially thought.