By Tomàs Le LouarnSeptember 12, 2018 No Comments 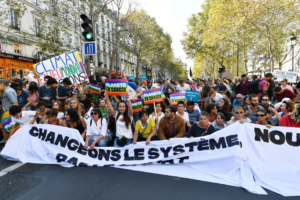 One year ago, French president Emanuel Macron promised he would “make our planet great again”, posing as the poster boy in the fight against climate change against coal-loving Donald Trump. Nowadays, those promises seem to have gone down the drain. Nicolas Hulot, a celebrity environmentalist and Mr. Macron’s environment minister, resigned last week on live radioamid frustration at the government’s lack of action: “Have we started to reduce our CO2 emissions? No. Have we started to reduce our use of pesticides? No. To prevent the erosion of our biodiversity? No.”.

Is this frustration justified? What actions are we taking on a local and global level to fight climate change? Can we expect substantial changes in environmental policy with the upcoming COP 24?

The 2015 United Nations Climate Change Conference, COP 21, held in Paris, was a high point in the fight against climate change. 174 countries signed and began implementing an agreement which sought to limit global warming to “well below 2°C” Celsius compared to pre-industrial measures. But the non-binding nature of the agreement meant that the second biggest issuer of greenhouse gases, the U.S, left the agreement under the newly elected government of Donald Trump. New talksin Bangkok to strengthen the agreement gave little progress.

Several demonstrations have taken place across the globe for stronger measures against climate change. The day before the start of COP 21, the Global Climate Marchtook place, uniting 785’000 people across 2000 events and 175 countries to raise awareness about the perils of global warming. The day after Mr. Hulot’s resignation, a citizen-led demonstrationof 27’000 in Paris sought to prove that French society could unite for the protection of our environment. But are demonstrations and agreements enough?

António Guterres, the UN Secretary General, gave an alarming speechon climate change this Monday, claiming that if we didn’t act against the phenomenon in less than two years the world might face “disastrous consequences”. Mr. Guterres didn’t mince his words, talking of a “direct existential threat” and warning that “climate change is going faster than us”. He urged civil society to keep world leaders accountable, deploring their lack of leadership and ambition.

Mr. Guterres is right to have given his speech a sense of urgency, according to the UN, “if we do not change course by 2020, we risk missing the point where we can avoid runaway climate change.”. Worried about the world being at the abyss, the UN chief mentioned this year’s monsoon floods in the Indian state of Kerala, the worst on record, or the nearly 3000 deaths from Hurricane Maria last year in Puerto Rico. Other examples are the massive wildfires experienced this summer, such as the ones in Sweden, covering 250km² with temperatures 10°C above normal levels.

Despite these initiatives, citizens are also taking matters into their own hands, not waiting for big wigs to make decisions environment protection. Boyan Slat, a Dutch entrepreneur, had the idea for Ocean Cleanupwhen he was just 16. The ambitious young man designed a device with the main objective of cleaning up the “great pacific garbage patch”, an area twice the size of Texas in between Hawaii and California containing 80’000 tons of litter. The device set sail as recently as last Saturday and will float with currents, acting as a massive trash bag to trap garbage.

Environmental protection is a fight the world needs to pick up on many fronts. Deforestation is deregulating climate patterns and killing biodiversity. An increase in flooding and droughts and the melting of glaciers is putting a strain on freshwater reserves. Higher temperatures in oceans render water more acidic, killing off sensitive algae and corals. With a 5°C temperature increase in the arctic over the last 5 years, its summer ice cover is expected to almost disappear in coming decades. (Source: WWF)

As of now, the world will miss the targets the COP21 set for global warming, which according to a UN Study, represent just a third of what is needed for a cooler planet. Our society would be sensible in heeding Mr. Guterres’ call.

But you can take action right now heed Sciences Géopo’s and SPE’s call to take part in our discussion on the world and climate change tomorrow at 12:15 in the Old Courtyard. Together we can raise awareness and strive for better solutions.