By Akshat SinghSeptember 13, 2018 No Comments 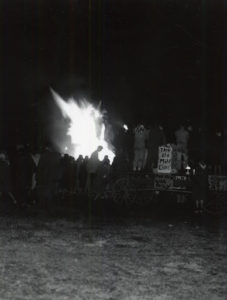 In the past week our campus has become ridden with paranoia. There are murmurs that dark clouds carrying a curse will descend upon the student body. The reason for this is the recent discovery of cult meetings happening every monday. A recent undercover operation by The Sundial Press has revealed the purpose of these meetings: to plant controversies and stir emotions on campus.

The Sundial’s investigative curiosity sent one of our reporters into the field to observe a cult meeting in progress. After our reporter was spotted by the cult members, who were dressed in robes running around a bonfire, The Sundial member was knocked out cold.  When he came to, the reporter observed the cult members sitting and discussing various methods to stir up controversy on campus. After much persistence from the journalist, The Sundial was granted an exclusive interview with the leader of the controversy cult.

“Our aim is to ensure that the campus is always wrapped up in controversy. The reason is simple — we believe that a general climate of controversy creates a competitive environment.  We, as Sciences Pistes, need a lot of competition to maintain our unrealistically high standards of academic achievement,” he said, speaking somberly through a mask used to hide his identity.

The reported also spotted a student sitting on the grass next to the cult leader.

“Our bonfire chanting ended too soon!” She lamented, “Our initial plan was to keep stoking the fire but all parties have mutually resolved the most recent controversy. It was extremely disheartening and rather unprecedented to see everyone being mature. But we do have a contingency plan for more trouble.”

Back at the university, the fear of impending controversial issues has united students in their distress.  Group hugs have taken over the campus like wildfire.

“We all know that thanks to those creepy duds, some controversy is soon going to come up. We will all hug each other and shut our ears to avoid hearing anything too controversial. We’d hate to be drawn into another one of those issues. Choosing between friends with different opinions can be so annoying,” a student told The Sundial Press after leaving a group hug that was so long it had broken a world-record.

The administration also had something to say on the issue.

“This became a blessing in disguise for us administrators! As long as the students are engaged in their own debates, we won’t have to respond to their idiotic how-do-I-access-my-student-space emails. Moreover, it is providing a wholesome experience to the newly inducted student,” said an anonymous member of the administration before disappearing behind a stack of papers.

In the meanwhile, The Sundial Press recommends all readers stay safe and avoid any potential disasters.