By The Sundial PressOctober 5, 2018 No Comments 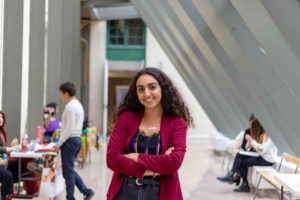 I’m Reem, I’m 18, I’m a 1A Euram and I’m from Ottawa Canada but originally Palestinian/Iraqi. I speak five languages: French, English, Arabic, Swedish and Spanish. I like Oreos and I swim.

What do you think the role of a Student Representative at Sciences Po Reims is or should be?

I think that it’s a perceived role because people think you have the power to do something and I don’t think that is necessarily the case. I think a student representative is a megaphone and is there to be the intermediary between the administration and the students. One can have ideas to propose but if the student body doesn’t support the ideas then one cannot get anything done. I think you need to be someone who is able to communicate efficiently, on one hand, to the administration about the issues on campus and on the other, communicate to the students what is actually going on because people are lost. I myself do not know what is going on and I would like to explore and understand that. A student representative is also there to be approachable so people are comfortable to come talk to you because sometimes, it’s hard to talk about these things when you are new and lost.

First, I genuinely enjoy Sciences Po and the community that is very nice and welcoming. It is a place that allows for great growth. I think I will learn a lot from my experience here but I also want to give back and be part of this same experience.

Second, I also think I have experience that is relevant; I have represented students for the past few years on a provincial, governmental and national level in Canada. I talked to senators and parliamentarians about youth issues and perspective on various topics. I am also good at meetings in a sense that I know how to get my point across. I think a lot of the time people overcomplicate things when it comes to communicating and I think I have a way of doing it efficiently, or at least contribute in that matter.

Finally, I think this is a great way to get to know the school better and understand how the institution works and get to know the student body. Whether or not I win, it doesn’t matter because I feel like one of the best parts is to get to know people and eat cookies and have interesting discussions with them.

I think that to be a good student representative one has to be open and understand the student body in its diversity. I am an open person and I speak both French and English, which means that I can talk to everyone. I’ve been a representative before and have done it for multiple years and am also good at social media and communication. I believe I am an approachable person and that’s what I’m basing my campaign on: being open and allowing people to come to me for suggestions. I don’t think it is realistic to tell people you will change the world, but the most important thing is to explain what’s happening to students and gain support because it is through the exchange of ideas that one will be able to push for something.

As a Student Representative, what would be your mission or your main goals this year?

I think it would be a good start to understand what is happening on campus. I know people have been trying to use Google Calendars but since it is not formally put in place then it is not helpful. Therefore, I think that having a common system of information on the student space and have all the events available to you so we’re also not bombarded by emails every day.

There is also the end of semester professor evaluations that, I think, need to be turned into feedback all throughout the semester in a form of biweekly emails to professors to explain what is going on in lectures because, a lot of the time, people have problems with that and the way of working is specific to each TA which makes it more complicated.

I have also noticed that, concerning the Mental Health Center, one has to physically go to book an appointment. I think that, for someone who’s struggling, it is very tough to do that in front of other people so I think it would be better to have that on the student space which is an idea that was suggested by another candidate.

My principles are social inclusivity, communication and transparency and that’s what I want to base myself off of. But I think that throughout the year students will bring ideas and projects as they get to know the school better which I’ll work hard to implement because I think that is what’s most realistic rather than wanting to do your own thing.

I think there needs to be more clarity as to how our education works when it comes to credits, the civic engagement program, the dates of the midterms and finals before they even start. A little more preparation when it comes to administrative things would be an area of reform. I am aware that the administration is already doing a good job and I applaud them for it, but I still think there’s room for improvement and I want to work towards that.

Finally, if you could visit any moment in time, past or present, where would you go and why?

I think the moment cavemen discovered fire is a great turning point in human activity. It would be interesting to witness their facial expressions and the awe of something that we take for granted nowadays. Most people have a fire within a pockets reach and it’s so fascinating to think that something such as fire, like the product of friction by two rocks, randomly found changed everything.

Maybe I’m just thinking about this because I still don’t have heat in my apartment, which I’ve heard has been a common theme around here.