By Adam HavelkaOctober 8, 2018 No Comments 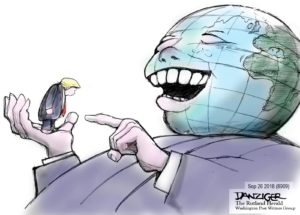 The stage was set. Donald Trump sat in a chair waiting to deliver the annual opening speech at the General Assembly of the United Nations in New York City. The eccentric US president successfully coasted along the first fifty seconds of his speech. Then, laughter filled the room until it was drowned out by a light-hearted round of applause. Some may shrug off the moment as another episode of a TV-like performance by Donald Trump and the eighteen hundred odd diplomats in the room. It is, however, demonstrative of a radical divide between two prevailing worldviews, of unilateralist isolationism and of multilateralist globalism.

Fancy as they are, these labels pose a problem in themselves. The liberal order, of which the West used to be champion, only existed in the form of a certain status-quo in the balance of power. If one wants to argue for a certain “rules-based” order it is hard to overlook the fact that the leaders of such an order, in the past two decades, invaded two countries and conducted numerous operations either without a mandate from the United Nations or in direct violation of one. The adjective “liberal” also seems rather unwarranted when considering the last three decades were built on the back of the protectionist and largely illiberal China. Economic liberalization no longer equates to growth and political liberalization is not a precondition to engage on the world stage.

The takeaway from this seems to be, to people like Trump, that the world is a dog-eats-dog field of anarchy where strength is the only means by which to get your way. It seems to echo the ideology that caused the Second World War more than six decades ago. What sets Mr. Trump apart from all previous US presidents is that he perceives the void in the system as something to be exploited, not fixed. When Harry Truman proposed the rough idea about how a rules-based order should function roughly seventy years ago, it was designed to promote stability, prosperity, and equality. The institutions upholding it were built on the consensus that a catastrophe of the scale of the Second World War had to be prevented from happening again. The structure of the system was primarily meant to promote conflict resolution, establish a mandate, and prevent the pitfalls arising from macho politics.

The West, led by the United States, has championed this system since its inception, attempting to improve it along the way. Until now, it seems. Donald Trump has rebuked security guarantees to allies, upended foreign trade practices and shifted away from promoting democratic principles and the values of freedom. The security guarantees that were meant to keep in check the security dilemma of friendly countries towards common foes, foreign trade practices that were put in place to promote growth and peace via mutual interconnectedness, and democratic values centered around the recognition of human beings as equals.

Mr. Trump, it seems, has substituted the long-held principles of US foreign policy with a view that could be called “alt-international relations”. It is built on nostalgia for the United States of the late 1940s, a country virtually unmatched in military power, exporting the perks of its civilization while having complete discretion on the world stage. Yet, as mentioned previously, the nature of the proposed steps is pretty much the exact opposite as those adopted in the forties.

The more troubling part, however, comes with how the US is currently yielding its global influence. By pulling the US out of multilateral trade deals, treaties, and international organizations, the Trump administration creates a power vacuum jeopardizing the global system at large. Mr. Trump is apparently trying to achieve something similar to what he did on the national level by defunding certain agencies and rebuking past legislature. But the difference is that on the national scale the institutional build-up of the country, to an extent, dampens the blow by keeping the executive in check. In US foreign policy, amid the absence of such institutions on the global level, Mr. Trump is at best limited by Article I of the US Constitution which enumerates the sharing of powers with Congress. This has, however, had little to no impact on how the current administration approaches foreign policy, mainly owing to the Republican majority of the current Congress. The most important choices are therefore in a single person’s hand. It is also important to add that the global order is immeasurably more fragile than the national one of the United States. When there is civil unrest in the US there may as well be a civil war in the more volatile places of the world.

The outlook for the future also seems rather grim. Reactionary policy has, over the last twenty years, been replacing the proactive leadership that has been the chief principle of the foreign policy of the US. The rising internal disputes within the US political system have also paralyzed its ability to maintain their global leadership role. This, however, is not a recent or a short-term problem, and as Jane Mansbridge argues in her Washington Post article it is not going away anytime soon. The meteoric rise of China, the reemergence of Russia, and the increased cohesion within the EU have all taken a toll on how much power the United States yields on the global stage.

What is clear from all this, is that the US is not and will not recover the role as the global hegemon. As the single biggest player’s power is waning it is important to uphold the order that has brought peace to most of the world for the last couple of decades. Long-term allies of the United States should step up and bridge the gap in US leadership while we anxiously await to see if the successor of Mr. Trump will break with Trumpian policy and decide to make a U-turn back towards the liberal world order.