Protestors Confront Reims Mayor About the Living Conditions for Refugees

By Clément StreiffOctober 17, 2018 No Comments 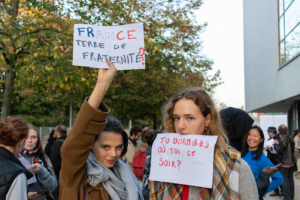 Students from Sciences Po during the protest. © Evan Boulogne

On the morning of Wednesday, October 17, about a hundred protesters, including students from Sciences Po Campus de Reims, activists from the Reims Exil Solidarités movement, and other concerned citizens, gathered outside Stade Auguste-Delaune. They were hoping to confront the mayor of Reims, Arnaud Robinet, and other members of the local council, about the lack of basic rights for refugees, especially concerning their lack of proper housing.

Meanwhile, representatives of different councils and social services were gathered in the conference room of the Stade Auguste-Delaune to discuss how they could work together to “help the weakest”, as was formulated in the mayor’s invitation to the different representatives before the meeting. 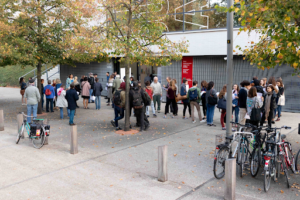 Protesters gathered in front of the stadium. © Evan Boulogne

This initiative was considered by many at the protest to be a feeble attempt by the local government to appease concerns about refugees, without creating any substantial plans to help them. Those who shared this sentiment included the Reims Exil Solidarités movement. In the pamphlets they handed out, the group highlighted the contradiction between Reim’s policies on refugee rights and the dismal reality where even their most basic amenities are lacking.

About forty asylum seekers still live inside the Verrerie makeshift shelter near the canal. Among them are children from two to five years old, a baby, and a woman with a life-threatening illness, according to the movement. These conditions, the representatives of the movement added, are unnecessarily harsh, “especially for people who came here to flee hell in their home countries.”

“The sense of humanism conveyed by the mayor in the media has to be translated into concrete actions,” the movement argues in their pamphlet.

“About two hundred refugees are currently staying in Reims”, stated Pauline Fritz, one of the co-presidents of Interagir, an association on campus which deals with refugees’ and asylum-seekers’ rights.

A student from Germany added that “these refugees deal with different situations, as some of them were considered by the social services to be provided with housing, whereas some of them were not. Those living in the makeshift shelter are generally provided with food by the Armée du Salut every evening, some sheds are even built with rudimentary materials. However, the winter is around the corner and the refugees will be facing life-threatening conditions as the temperature will be dramatically dropping.” 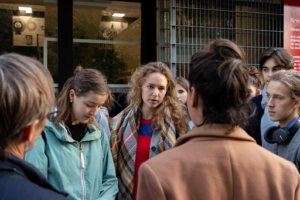 “Last year, a similar protest occurred,” continued Fritz, “with about a hundred students from Sciences Po and the aftermath was encouraging: most of the refugees were provided with proper housing after the protest. But this year, we honestly don’t expect such a positive result. That being said, Interagir will keep on protesting and voicing its concern during the following weeks.”

“Interagir’s motivations are not political,” added Fritz, “since our only areas of action are the enforcement of the basic rights of refugees in Reims and..the right to proper living conditions.”

Despite the number of protestors, the mayor’s team did not show much consideration for the group, as they were kept out of the building by security forces despite many peaceful attempts to negotiate access. A few representatives from the Reims Exil Solidarités movement were allowed to get in to meet with the mayor. They were granted only a very brief encounter that left them dismayed.

“We could only chat for about twenty seconds,” Fabien Tarrit, one of the movement’s activists, said jokingly before adding, “the only thing Mr. Robinet granted us was a handshake.” 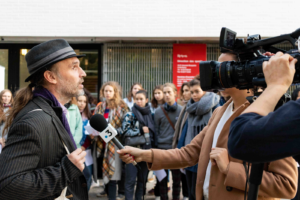 Fabien Tarrit, one of the many Reims Exil Solidarités’ activists. © Evan Boulogne

Yet, many of the protestors hope that their presence may have brought exposure to the issue, as France 3 journalists were there to interview some of them. That being said, the mayor’s lack of cooperation felt unanimously disappointing.

As a response to this lack of consideration, slogans were shouted loudly outside the building in order to distract the conference. Chants included “un toit, un droit, l’hiver il fait froid” (a roof, a right, winter is coming) and “solidarité, seulement sur le papier” (solidarity: only on paper), which the second-year student Matisse de Rivieres came up with on the spur of the moment. The chants appeared to do there job as an attendant had to shut every window on the second floor. 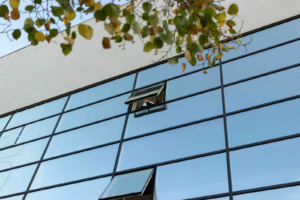 The conference was disrupted by the protesters’ catchphrases. © Evan Boulogne

On the whole, it seems like no satisfying changes in the living conditions for the refugees can be expected from the mayor’s team in the following weeks.

The Sundial Press news team will be reporting on any further updates on this story.