4 Reasons Why Dijon is Better Than Reims

By Patrick Bauer-BlankOctober 31, 2018 No Comments

On paper, Reims and Dijon appear to be quite similar. They are both small cities, both serve as regional hubs for their surrounding wine regions, and both are homes to decentralized Sciences Po campuses. I have spent a year in both cities as a Sciences Po student and I frequently travel between the two, so I have seen how they have (or have not) changed during my time in France.

Both cities seem to have ambitious goals. Dijon hopes to win the buzzword competition to become the first French Smart City. Meanwhile Reims hopes to update its Tinder profile to include adjectives like ambitious, attractive, innovative, sporty, playful and cultural (source: Ville de Reims). On the face of it, both cities want to make life better for its citizens, but everyone knows actions speak louder than words, and in this case Dijon prefers actions.

Let’s see the 4 reasons why Reims should be more like Dijon.

1. Dijon is made for people, not cars 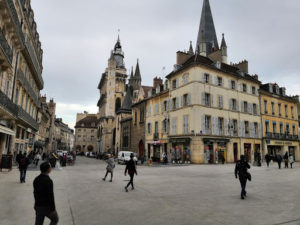 Dijon: the pedestrian district where general circulation is prohibited. 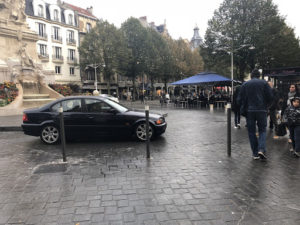 Reims: Place D’Erlon where high levels of traffic are common and unregulated. 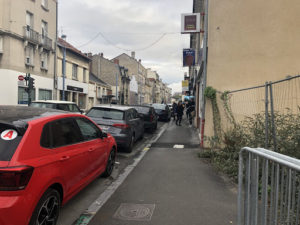 Reims: laughably small sidewalks on Rue Gambetta. An example of how Reims feels about pedestrians.

The 20th Century fooled us into thinking that the car was the future and the pedestrian was the past. All over the world, old squares and pedestrian promenades were ruined by the noise and pollution of the automobile. Modern cities are trying to turn back the clock and give the streets back to the public. However, some try harder than others. Dijon has turned a car-infested city into a car-free urban hub in a matter of years, whereas Reims still has a roundabout running straight through the heart of Place D’Erlon with no plans for change.

Even when you look at the city’s plans for new pedestrian areas, like the renovation of the square in front of the Town Hall, it lacks ambition. Reims is not even ambitious enough to entirely rid the plaza of cars, and this is despite cars not having had access to it for months since the debut of construction. The most egregious of these examples is the square right in front of our school, Place Museux, the renovation of which will transform the two parking lots into a pedestrian zone with trees, sculptures and tables. Surely then, the city would take the logical step further and make the entire street of St. Maurice closed to car traffic? Of course not.

While Dijon expands its pedestrian areas, Reims can’t even maintain the ones it already has: 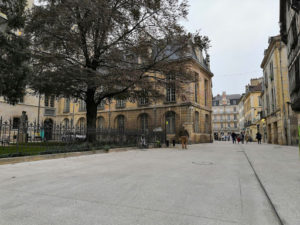 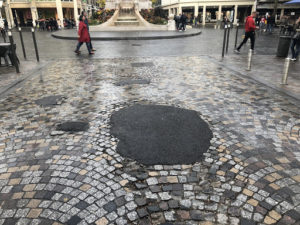 Reims: Place D’Erlon where the city can’t be bothered to repair the road properly. 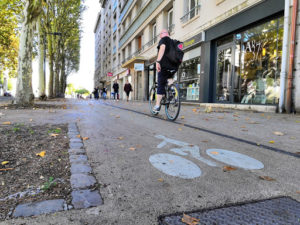 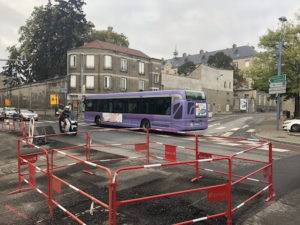 The city of Dijon has developed a large network of separated cycle paths, that offer safe and peaceful bicycle circulation around the city. Reims lags sorely behind. Most separated cycle lanes are limited to new developments outside of the city, and they inexplicably disappear, dumping you onto a high-speed boulevard. Just look to Rue Gambetta as an example, it features a one-lane northbound bus corridor, two-lanes of southbound traffic and one lane of parallel parking. Is it really such an effort to add a bike lane? While they are at it, they might as well make the sidewalk big enough for people to walk down, and give fines for frequent obstructions to the sidewalk which force walkers onto the street.


3. Dijon said “no” to an urban highway, now it is time for Reims to do the same 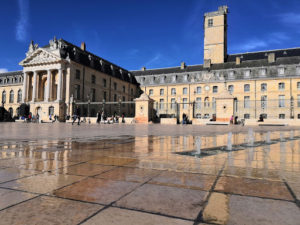 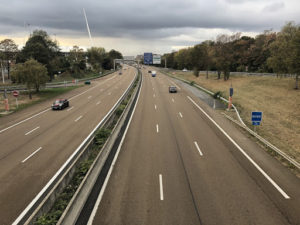 Urban planners of the 20th Century dreamed of destroying small city life, by drawing a giant highway through the city center. Reims and Dijon were no exception to their wrath of destruction. Reims welcomed, even encouraged, the project to move forward, hoping that somehow it would put Reims on the map. Dijon eventually escaped the plan, citing environmental reasons. Dijon made the right decision, because an urban highway would have brought in noise and environmental pollution, as it has in Reims. Today, Reims is faced with elevated levels of pollution, notably of micro-particles from diesel engines, as the urban highway is the preferred toll-free shortcut of truck drivers. Faced with this criticism, our mayor, Arnaud Robinet, ignores the question and makes fun of it by claiming that “Reims is not a polluted city, it just has peaks of pollution.” 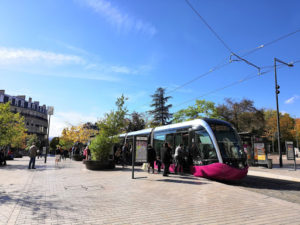 The Reims tram network opened in 2011 and the one in Dijon opened in 2012. The difference? The Dijon tram network has managed to cover about double the distance and more than double the stations. This  means that the Dijon tram is more useful and efficient as a means of transport than that of Reims. If Reims took the tram network initiative seriously, there would already be a tram route straight down Gambetta and an additional northeastern route.

All pictures to the courtesy of Patrick Bauer-Blank.

Born in Colorado, raised in Massachusetts; Patrick Bauer-Blank is an American in-passport-only who found his heart on exchange in Costa Rica. He started Sciences Po at the Dijon campus, but is currently a 2A EURAM at Reims. He’s overly cynical about yesterday, but naively optimistic for tomorrow. He plans to be a litigator, but dreams of traveling the world on a motorcycle.