By Emma ReillonNovember 16, 2018 No Comments 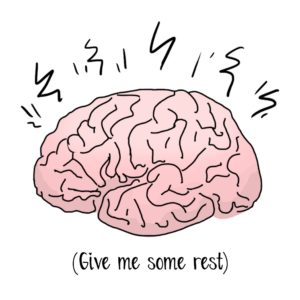 If you have updated your iOS lately you might have come across the new possibility to set a timer on your phone in order to limit your daily use of apps. Some would call it marketing, a hypocritical move from GAFA to fake interest in our mental and physical health. But one cannot deny the emergence of regulation on digital hygiene. Everyone seems to be considering stepping back, taking precautions and limiting the use of social media and technological devices in general.

I am not here to lecture on how wrong it is to spend one hour scrolling through Twitter in the morning and how the evils of technology corrupt our lives. Why? For one, because I am not your mother, but also because it would be highly immoral to criticize another person about something I am also guilty of doing. The idea in this article is that we should stop seeing ourselves as dinosaurs awaiting an impending extinction caused by digital overstimulation.

But think for one second about the last time you checked your Facebook app for no other reason due than the impulsive checking habit you have developed. All the times you go on refreshing your timeline, seeing nothing new pop out but continue doing it anyway. Why do we do this?

There are now studies that focus on the cognitive experience of the brain, enabling us  to observe the effects of technology on your nervous system. They show that your brain is experiencing little dopamine rushes whenever you see a notification, just like the runner’s high you experience during a jog. Dopamine was first thought of as a pleasure-giving chemical. But further studies now show that it creates a dopamine-seeking reward loop, motivating us to seek out certain behaviors because we have learned to expect a positive response from them. Your nervous system is highly responsive to digital stimulation and the more dopamine you get, the more you continue to scroll. Just like every addiction, you always need more to feel satisfied.

In his book Sapiens, a Brief History of Humankind, Yuval Noah Harari discusses the idea of humans struggling cognitively with modern stimulation. Indeed, during the past five hundred years, domestication has turned us cavemen into “civilized” individuals. Yet our anatomies did not have the time to fully adapt to those changes. Your brain could be thought of as a very old machine that has not been updated at the same pace as technology. On the other hand, all the technology created today serves a purpose: their mechanisms are designed to make you a junkie.

The blue light from your screen, the colors, and the constant stimulation provided by your interactions and notifications make these devices very addictive. At first one feels good, because your pocket-carnival fills your mind with information and stops boredom. The tricky part is that while you spend time on platforms, you not only let your attention be caught by multiple sources of information, but you also offer something in exchange: your time. Let me spoil it, your time is their money. In an Axios panel, Sean Parker, now ex-president of Facebook, admitted himself that the apps are designed to “consume you”. Yes, the more time you spend on a platform, the more profits it generates, but it needs to give you something in exchange for compliance: a dopamine rush.

Thus, as vigilant as you believe yourself to be of the dark capitalist world we live in, there is still not much you can do to fight your brain’s own mechanisms. Us humans have CPU brains from the paleolithic era and they do not fit in with modernity. We were not created to multitask in the way our modern tech-overlords want us to. Listening to a podcast while doing the dishes is possible, but actively reading Aristotle’s Nicomachean Ethics while keeping an eye on a Facebook Messenger conversation is impossible. So I will not blame you for your obsolete hardware, but I can tell you to take good care of it. Indeed, it does not look like any of these digital corporations are interested in doing it for you.

Setting a timer on the Instagram app to remind yourself to give your brain a break from the deluge of bright pictures is not necessarily a reactionary approach to technological progress. Acknowledging that you are not a robot and that you need to protect your brain from getting flooded should be thought of as self-care. No technology is evil, but your brain is sensitive to the overstimulation of technology. So make sure you have a healthy relationship with your devices.

To learn more about dopamine and how it affects your brain read Kent. C Berridge and Terry. E Robinson, What is the role of dopamine in reward: hedonic impact, reward learning, or incentive salience

Emma is a 5.2 feet/1.60m tall tea and dark chocolate fueled human. She tries as best as she can from her short height to see and perceive the world as accurately as possible. Nevertheless, this lack of altitude she faces when looking around may happen to cause a slight bias when it comes to writing.