By Ioana PleseaNovember 19, 2018 No Comments

Repression manifests itself in many subversive ways. Not only through street violence, the prohibition of opposition, or restricted freedoms, but also through its capacity to alter the human psyche. This is where repression’s true efficacy lies.

The repressed cannot see humanity around them, only pale slivers of it remain.  The self becomes a silent warrior in an environment of mistrust. Anyone around you might betray you at any point. You are alone.

This distrust and dehumanization appear as a cultural phenomena in totalitarianism. On Tuesday, November 13, ALAS (Asociación Latino Americana Solidaria) screened two short films that underline the pervasiveness of alienation under the military regimes in Latin America.

The first film screened was Santiago Bou Grasso’s Padre, released in 2013.  The animation takes place in Argentina in 1983, the year when the country’s last military dictatorship came to an end. A gaunt woman, dressed in austere clothing, prepares medicine for her father. As the country is emerging from the military regime, her daily routine does not change. Nor does the emotion of malaise plastered on her face. Through the decoration of the house and other carefully placed details, the viewer is left to deduce that the woman’s father was a military official.

Radio snippets reveal that military officials are subject to grave charges of human rights infringement. We never see the woman’s father, only her ceaseless preparation of his meals and medication. In a few pensive moments, we see the woman look out the window. At last we get a glimpse of what she sees: three birds. One is still, one is struggling to breathe, and the third is lying face-up, as if it has died.

Throughout the movie, sounds of porcelain cups hitting silverware and other monotonous noises enhance the somber feeling of isolation. However, these are overpowered by the beating clock, which masterfully frames the film, as the passage of time feels more and more burdensome. The woman takes the tray into her father’s room and we see an empty bed. He has died. Once again, she looks out the window and we see a yard filled with dead birds, with only a couple of them trying and failing to fly. From an aerial viewpoint, the film’s last scene reveals that the birds might have not truly been there, they existed only in the woman’s mind, haunting her.  Were they the projection of all the humans that her father might have played a role in killing? 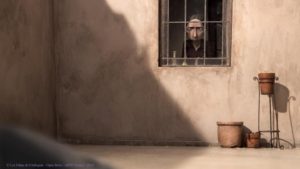 Padre, a highly acclaimed film, receiving over 90 awards, offers no certainties. The film’s meaning is conveyed through subtleties and constructed by the viewer. It is a powerful piece, showing alienation during times of political violence and change. The families of the perpetrators of violence are victims and sometimes even prisoners themselves.

The second film was another short animation film. The Academy-Award winning Bear Story (2016) directed by Chile’s Gabriel Osorio Vargas. Bear Story is not subtle and symbolic, but a straight-forward film. The message is transferred through emotion. Based on the life of the director’s grandfather, the film cleverly shows the story of a bear separated from his family. We see the bear alone in a house that is meant for an entire family. He is assembling tiny mechanical bears to be put in a music box. He takes the music box onto the streets and as a child and his father walk by, the child asks for money to see it.

The child watches the diorama of the music box, which then becomes a film within a film.  This film depicts a powerful allegory of a bear that is beaten by police, arrested and taken from his family to forcibly perform in a circus. But, against all odds, the bear escapes and returns to his ruined home where he finds his wife and child. This is skillfully portrayed through impeccable animation that uses mechanized bears and puppet show techniques to tell a story. 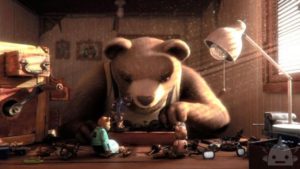 This is the story of a lonely man coping with the separation from his family by keeping their memory alive. Gabriel Osorio Vargas’ grandfather was imprisoned during Pinochet’s dictatorship, and this film, likewise, keeps his memories alive.

These two movies perfectly underline the message that ALAS wanted to deliver through this screening: the memory of political violence cannot fade away if we are to prevent it from happening again. It is a beautiful and heartbreaking way to show this through animation. One could brush them off as children’s films, but they are so much more.

The theme is especially relevant today, as the members of ALAS pointed out, at a time when Brazil’s newly elected president Jair Bolsonaro has said that he is in favor of a military dictatorship and that Pinochet “should have killed more people”. Now, more than ever, we must stress the insidiousness of repressive regimes that continues even generations after they are gone.

Ioana Plesea is a first year in the Euro-American Program. Hailing from Romania, she loves the arts and ranting about Eastern Europe.