The Indo-Pacific: A Theatre of Conflict and Cooperation

By The Sundial PressDecember 1, 2018 No Comments

It would be fair to say that the US-China relationship has come under strain in recent months. Since the U.S. National Defense Strategy branded China as a “strategic competitor” in 2018, the American administration has also accused China of unfair trade practices, intellectual property theft, increasing military aggression, and interference in the United States’ domestic politics.

Amidst the souring of these relations, attention must be paid to a region that had previously been on the periphery of strategic considerations and has, in recent years, become integral to American foreign policy. In the future, it may perhaps also become the theatre for a power showdown: the Indo-Pacific.

The super-region is defined primarily by its maritime boundaries. In addition to the island Nation-States that populate the Indian and Pacific Oceans, the Indo-Pacific also includes bigger regional powers that flank the Oceans on either side. In the west, there is India, that considers itself as the strategic hegemon of the South Asia-Indian Ocean region. To India’s east, there is a growing China that is vying for supremacy in the Indian Ocean. Its activities in the South China Sea have also become a point of ferocious debates in the international community. Further east, Japan sits at western edges of the Pacific while the eastern reaches are bound by the US. Down south, Australia flanks the southern reaches of the two Oceans. This recent amelioration of the Pacific is a testimony to the amended policies of these countries that reflect the growing importance of the Indo-Pacific region.

The shift in strategic thinking that seeks to create a contiguous Indian and Pacific Ocean is apparent, but the focus of this super-region still remains Asia. As Rory Medcalf argues, the new region should ideally be called the Indo-Pacific Asia. The shift reflects the changing geopolitics of the world where Asian countries, individually and in blocs, are gaining strategic and economic momentum and thereby attracting major global players to the region. This is represented in growing American funding to the region that recently committed $1.5 billion over the next five years for regional diplomacy, development and defence programs. In July this year, the US State Department announced $113 million of new funding to expand economic engagement in the Indo-Pacific, and in September the United States committed to joining the Pacific Regional Infrastructure Facility.

Recently, Japan entered into a $200 billion Partnership for Quality Infrastructure that cements its commitments to promoting high standard high-impact infrastructure investments in the Southeast Asia region. In an unprecedented move, Australian Prime Minister, last week, committed two billion Australian dollars ($1.4 billion) for regional infrastructure projects and another one billion Australian dollars ($719 million) for Australian businesses operating in the Pacific. He stated that he wished to return the Pacific to the centre of Australia’s strategic outlook and also promised increased Australian military presence in the region. Last, India has sought to increase its presence in the region as well through the “Act East” policy, a spin on the “Look East” policy of the 1990s.

This increased interest in the Indo-Pacific is not a coincidence. The motivations of these four countries are tied deeply to growing Chinese presence — military and economic — in the region. Not only does the danger to freedom of navigation in the South China Sea concern the US and its allies, but Chinese funding to small island nation-States of the Pacific are also attracting American attention. These large-scale investments for infrastructure improvement come with few conditions and many smaller States are starting to prefer China over their traditional ally: the US. American strategists also view this is as a threat to American strategic interests in the region.

India is concerned by China’s military encroachment into a region that India considers as its backyard. A military base in Djibouti on the eastern coast of Africa deep sea ports in South Asian countries: Sri Lanka’s Hambanthota, Pakistan’s Gwadar and Bangladesh’s Sonadia Ports have piqued concerns in Indian strategic circles. The long-held fear cause by China’s string of pearls is furthered by these actions. 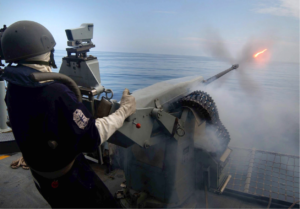 Conflict between Japan and China dates back to the 19th century. The countries have been largely unable to see eye-to-eye with each other and up until today, are in competition with each other, seeking Asian hegemony. Chinese policies in the South China Sea affect Japan directly and threaten its strategic circle. Furthermore, Chinese sympathies with the North Korean regime and American’s with the South Korean, has put Japan in a precarious position which, as an American ally, has been at the receiving end of all North Korean missile testing. Japan’s key foreign policy agenda has been to counter China’s strength.

In order to successfully challenge China in the Indo-Pacific, the four countries (India, Japan, Australia and the US) need to work in tandem with each other. A good manifestation of this is the Quad or the Quadrilateral Security Dialogue that was initiated by Japanese Prime Minister Shinzo Abe in 2007. Although an informal dialogue forum, over the years, the Quad has carried out multiple joint military exercises in the Indian Ocean region, off the Indian coast of Malabar which also gives these exercises its name. The group gained enough traction to incite formal notes of protest from the Chinese government.

On the other side of the spectrum, instead of seeking a hard power approach against China, the status quo defenders could seek to work along with it. Cooperation inside and outside the region can significantly reduce the risks of escalation of differences. A point of cooperation can be the significant consequences of climate change on the small island States in the region. An informed policy implemented jointly by these five countries can yield life-altering positive results for the islands, while also preventing a war (trade, hot or cold) from brewing between the two sides.

Aarushi is a college senior in India studying history and international relations. She is passionate about geopolitics and power conflicts. She is a keen museum-goer and music curator. To get through the day, she swears by a tall mug of black coffee. She is studying at Sciences Po Reims for a semester as an exchange student.