The Dark History of the Nordic Welfare State

I find nothing more frightening than a far-right party obsessed with pastel colors. The strongest fascist-like party in Northern Europe is the Swedish Democrats, who received a whopping 17.5% of the Swedish vote last September. Their campaign ads only had the text “SD2018”, and relied on the smiles of white people and their pastel-colored clothing to draw in disaffected voters. SD has nearly completed its long quest of washing away a fascist past by, among other things, changing their symbol to a blue flower in 2006. This is a far cry from their past symbols of torch-bearing viking men calling for a Sweden for the Swedish. 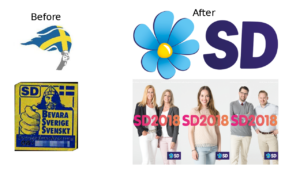 As of now, SD is still a political pariah, ostracized by all other parties, which have gone as far as to break with traditional Swedish block politics by forming a left-right coalition to keep SD out of government. It might get worse, but for now, we should seek to understand why their aesthetics are so frightening, and how it links to the Nordic welfare state.

Swedes are known as the Italians of the Baltic due to their overly friendly “hejsan-hejsan” culture. Although note, this is compared to the other, even more quiet and socially awkward, Nordic countries. Sweden itself is globally recognized as a humanitarian superpower. It has not fought a war in nearly 200 years, pursues a fiercely feminist and multiculturalist agenda and has the highest refugee density of any Western country. However, some of the polish wears off when one knows that Sweden is also one of the world’s largest arms exporters per capita, and it regularly sells weapon systems to dictators. This progressive giant has a dark underbelly.

The Nordic welfare state has a murky and often unspoken history of eugenics and imperialism. The ghosts of outdated policies linked to social darwinism still haunt Finland. In terms of imperialism, the indigenous people of Lapland, the Sami, are currently threatened by a Chinese-backed Arctic silk road between Finland and Norway. The road would cut through their lands and disturb areas traditionally reserved for reindeer herding. The Sami also play a crucial part in the history of Nordic eugenics and display its workings on the margins of society.

In 1922 Sweden opened the world’s first eugenics institute: The State Institute for Race Biology (or SIFR). Unsurprisingly, the first head of the institute was a pro-Nazi professor: Herman Lundborg. Their first project was to map out the physical features of about 100,000 Swedes and create a racial classification. They defined Finns and Sami as Mongols – a lesser race – and thus elevated their own racial status. Finns, ever anxious about their slippery ethnic identity on the fringes of Europe, “studied” the Sami even further to prove that Finns were indeed a pure race belonging to the Western creed.

The Sami were thus not only the subject of colonialism and violent assimilation, but also harassment and demeaning treatment by physical anthropologists in an effort to manufacture a racial hierarchy. A recent Finnish documentary, Hyvissä Aikeissa (With Good Intentions), describes the process very well.

As is common, all of this supposed scientific knowledge was amassed to justify and legitimize racist policies. State support for race biology was a way to define the chosen people of the Nordic race. After all, the word that Nordic people use to refer to their states is a variant of the Swedish “folkhemmet” – “the home of the people”.

Policy based on race biology was used to create this notion of the chosen people. Those who were “biologically inferior” were deemed a drain on state resources and sterilized. One estimate shows that Sweden’s forced sterilization program affected around 63,000 people, 90% of them women, from 1906 to 1975. It was a way to cull the disabled, the racially impure and the deviant. Denmark is estimated to have sterilized 40,000, and Finland around 7000.

This was an acceptable way to do social policy until the 70s. There was no leather-clad Gestapo to spirit deviants away, strap them into a chair, and sterilize them with force. This was a nascent welfare state, especially in Finland. So instead, legal mechanisms and race-based science were used to reduce the number of people included in the welfare state, thus reducing the number of people the system needed to support. Scariest of all, its proponents had good intentions. They genuinely believed sterilization would decrease child mortality, save the unborn from a life of misery, and ease the life for the worse-off who were ill equipped to become parents. This means that the history of the folkhemmet, even the good parts, is intrinsically linked to eugenics

This is why I fear an ex-fascist party donning a veneer of acceptability mixed with strong positions on race. Eugenics and race biology were the hot topic of upper-class salon discussions in the early and mid 20th century. Today, those terms have a negative connotation and instead we use words like “culture” and “immigration” to frame discussions about race. But clearly we must have this discussion openly, as Northern Europe is struggling with assimilation, and anti-immigrant, ex-fascist parties are rearing their ugly heads. In this discussion the North cannot pretend its welfare model ever was the utopian universalist project it is made out to be. The transgressions of the past must be acknowledged for future discussions to bear fruit.

I hope the tide turns or we may one day see the return to a society where a deaf couple must agree to be sterilized in order to get married. Chains forged by democratic vote, locked by bureaucracy, justified with science, and decorated with the pursuit of the good are the real threat. Gone are the days we could simply conjure the violent jackboot imaginaries of 20th century totalitarianism as a warning to ward off the rise of modern fascism.