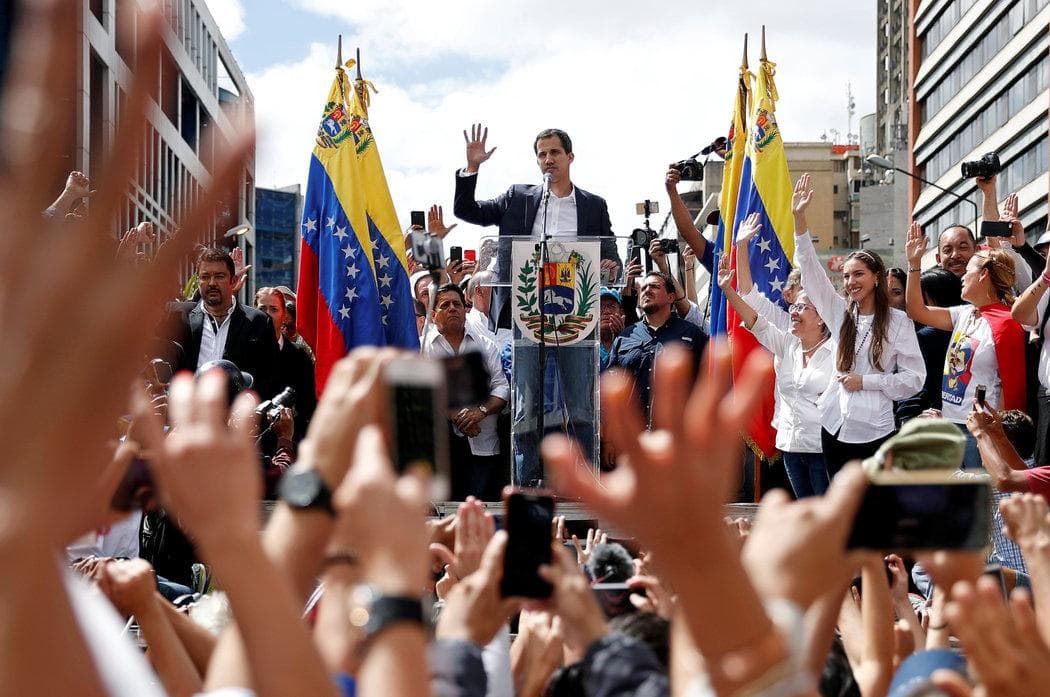 By Tomàs Le LouarnFebruary 20, 2019 No Comments

Nicolás Maduro wobbles in his dictatorial throne as Juan Guaidó is recognized as the new president “in charge” of Venezuela.

“Back home rumor has it that Maduro only has days left,” says Andrés Chacón, a 19-year-old Venezuelan student on campus, smiling at me while he wears his Venezuelan cap, as he has done for the past weeks. Andrés organized a march two weeks ago for Venezuelan democracy, embodying growing discontent against a president turned dictator. Around twenty students gathered in Reims, France, to give support to a peaceful democratic transition.

Venezuela has been in collapse since oil prices crashed back in 2014. On top of this, severe mismanagement and corruption by then president Hugo Chávez and his designated successor Nicolás Maduro has led the country to the brink of failure. Once the richest country in Latin America, Venezuela now suffers world record levels of hyperinflation, food and medicine shortages, and political repression. The UN estimates 3 million people have left the country in recent years.

A historic day for Venezuela?

Venezuelans were given hope on January 23, 2019, when Juan Guaidó, president of the opposition-held national assembly, declared himself president “in charge” of Venezuela with hundreds of thousands of onlookers cheering in downtown Caracas. Mr. Guaidó was recognized minutes later by the U.S government, swiftly followed by other regional powers including Colombia, Brazil, Peru, Chile, and Argentina as well as the Organization of American States, which had suspended Venezuela’s membership back in June 2018.

The regime repressed opposition protesters brutally and after 4 days, left 35 dead and 350 detained. In the meantime, Chavista gatherings occurred without obstacles. In a country with severe food shortages, free food and drinks were distributed. Mr. Maduro wants to give the impression Venezuelans remain loyal to him. Civil servants were forced to attend and ferried onto buses. When asked why he supported Mr. Maduro, a young Venezuelan in a pro-Maduro demonstration last Saturday, put it very bluntly: “because he forces us to do so.”

But this time around, repression and clientelism won’t be enough for the regime to stay afloat. Judging by the size of recent protests, Mr. Guaidó’s supporters aren’t a minority. Not only is the president “in charge” earning international recognition, but he is managing to conquer the support of modest Venezuelans who supported Hugo Chávez and Nicolás Maduro but have been disillusioned by unkept promises.

Mr. Guaidó declared himself president “in charge” following the constitution and the illegitimacy of the presidential elections in May. Mr. Guaidó did not mash his words, promising protests would carry on “until Venezuela is liberated”. He pledged to “cease usurpation, [constitute]a transition government and free elections.” 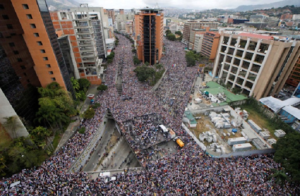 A legitimate democratic transition more than a U.S backed coup.

Mr. Maduro’s party, the PSUV, cried foul, claiming Mr. Guaidó is a puppet of imperialism. They resort to complaints about interventionism and a U.S orchestrated coup. But for desperate Venezuelans, unfair presidential elections in May are proving to be the last straw. After years of mismanagement and repression, it is a wrath Mr. Maduro’s government has brought upon itself.

Back in May of 2018, Mr. Maduro declared the elections free and fair. A bad cover-up in a country where most opposition leaders are jailed or in exile. Remaining opposition candidates were barred from running. Elections were mandated by the Constituent Assembly, the PSUV’s illegitimate replacement of the National Assembly. Smartmatic, the company running the electoral machines, claimed they could not guarantee the results and ceased operations. The UN refused to observe the elections and results were only recognized by Mr. Maduro’s allies.

On January 10, Mr. Guaidó declared to the National Assembly he would become president “in charge” of Venezuela. Facing the illegitimacy of Nicolás Maduro’s new presidential mandate, His claims are based on the Venezuelan Constitution. Article 233 states that in the case of absence of president-elect, the president of the National Assembly becomes interim president and new elections are organized within 30 days.

The end of the Bolivarian Revolution is dividing the world along lines of the Cold War.

The duel between the president “in charge” and the president “de facto” has led to tensions on the world stage. Led by the US, most democracies on the continent recognized Mr. Guaidó as president. Several European countries followed suit after Mr. Maduro failed to guarantee within a week a new election would be held.

The countries that recognize Mr. Maduro’s regime do so for ideological or economic interests. It is hard to believe in Venezuela’s sham democracy when the 20 countries defending it are illiberal democracies at best. Countries such as China, Russia, Turkey, Iran or Cuba care little about democracy or Venezuelan sovereignty. They have economic interests in the country with the biggest oil reserves on the planet.

Caracas owes at least $20 billion to Beijing and $100 billion to all external creditors, including Moscow. More than being a critical ally in the region, Mr. Maduro is to Vladimir Putin and Xi Jinping the only guarantee they will get their money back. He is holding on to support by paying back loans with oil instead of money. The Venezuelan opposition has understood this and Mr. Guaidó has extended an olive branch to China: “All agreements that have been signed with China following the law will be respected.”

Mexico and Uruguay are also notable exceptions, endorsing a neutral position. Together with the EU and other Latin American countries, they set up an international contact group. But while Uruguay sided with the EU calling for free and fair elections, Mexico’s far left government retains a non-interventionist position. Dialogue promoted by neutral countries is only giving more oxygen to Maduro. “There’s nothing neutral about Mexico’s position because in practice it validates Maduro’s re-election,” declared former senior Mexican diplomat Andrés Rozental.

But cracks in Venezuela’s socialist regime are starting to show and dissent among its ranks is on the rise. Several high-profile diplomats, including the Military Attaché in the Washington D.C Embassy, have recognized Mr. Guaidó as interim president.

The Venezuelan armed forces and police represent a crucial lifeline for the Venezuelan regime. To avoid defections, the regime is paying soldiers as much as surgeons, but even 80$ a month isn’t enough with hyperinflation. The opposition is trying to sway the army to its side thanks to an amnesty bill for anyone who could be persecuted by the regime. While desertion is becoming common among lower-ranking soldiers, only one high ranking general has proclaimed allegiance to the interim government.

Venezuela’s allies want to economically empower an interim president that many still see as a president on paper. The opposition frets Mr. Maduro and his cronies will liquidate Venezuela’s assets. Citgo, the U.S based subsidiary of PDVSA, Venezuela’s national oil company, had its bank accounts blocked by the U.S government and Mr. Guaidó has replaced its board. The regime tried to retrieve from the Bank of England gold worth $1 billion in a transaction that was blocked last minute.

What perspectives does Venezuela have for the future?

The immediate concern of President Guaidó is relieving Venezuela’s humanitarian crisis. An insensible Mr. Maduro declared there wasn’t any famine in Venezuela. His government refuses any aid saying it is a pretext for foreign intervention. Delcy Rodriguez, the regime’s vice-president, went so far as declaring that foreign aid was “contaminated and poisoned, it’s carcinogenic”. But Mr. Guaidó is steaming ahead, collection centers for aid have been set up on Venezuela’s borders and he has warned the military aid is coming in by January 23.

Venezuela’s armed forces have set up a blockade on the Tienditas international bridge, impeding the entrance of 60 tonnes of aid from Cúcuta, Colombia. Photo: Edinson Estupinan/AFP

These shows of defiance between the regime and the opposition cannot escalate up to armed intervention. U.S president Donald Trump declared all options are on the table. The opposition isn’t keen on any foreign intervention, but it’s pushing to sway the country’s armed forces to its side. The “usurper”, as the opposition calls Nicolás Maduro, will either face a swift or slow and agonizing fall of his regime, it is a point of no return.

Venezuela’s crisis is an ethical issue, not a political one: supporting Mr. Maduro’s illegitimate regime means supporting the prolonged agony of 31 million people. But a swift and peaceful democratic transition must include Chavistas, who still enjoy some support. If either political force ends up completely repressed, the saga will carry on.