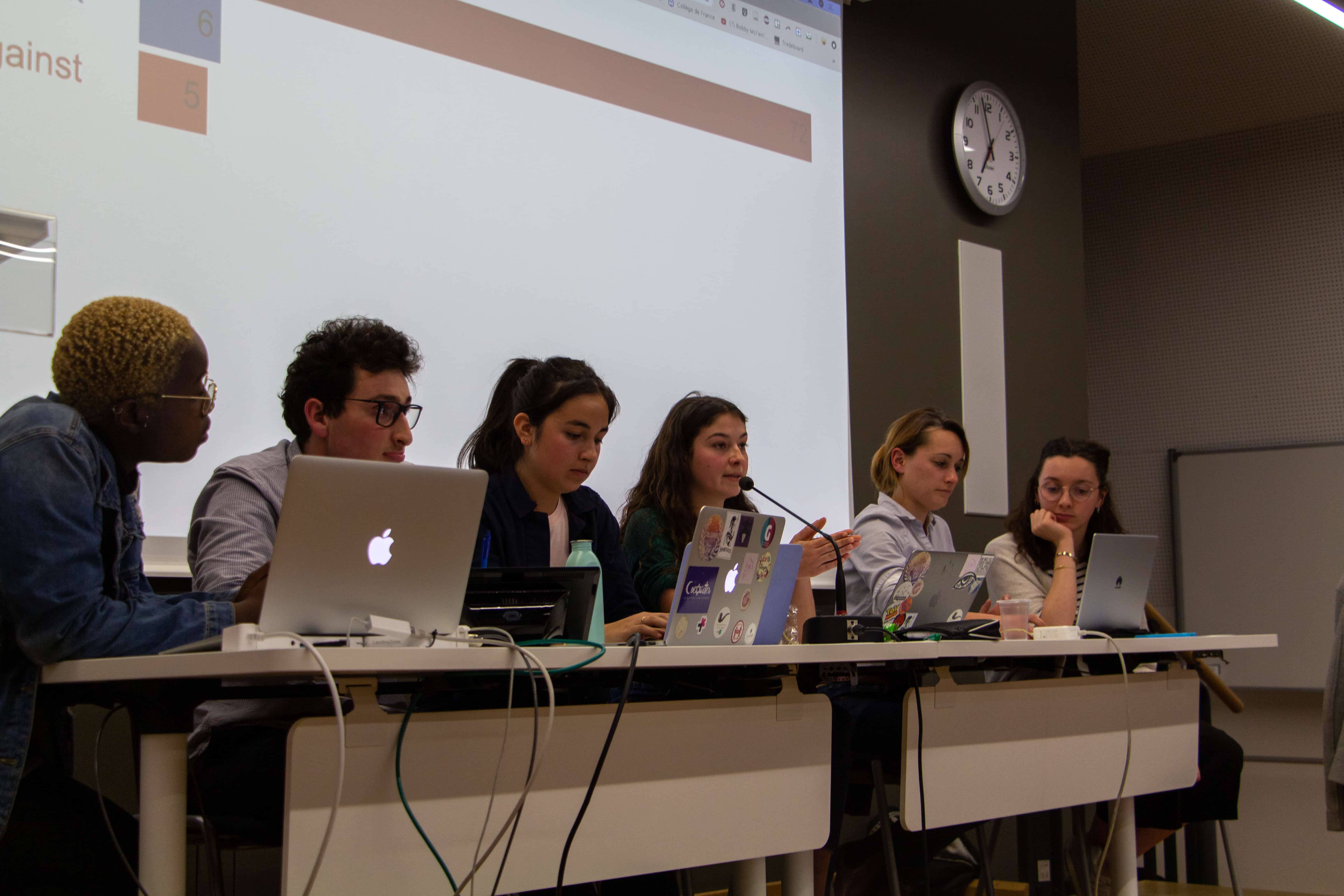 On Wednesday, February 20, a general assembly representing the student body passed the “Campaign Rules”, a document establishing the procedures of the 2019 Campaign Week, the election week for the four permanent bureaus here on campus: the BDE, BDA, AS and SPE.

The assembly, which was rescheduled from the day before due to insufficient turnout, barely hit its 110 person minimum requirement. The goal of the assembly was to begin debate on the ground rules for the election week, which is to take place from April 12 to April 21.

“At first people did not talk much, but then it was really great to see that people really debated and had things to say,” Matéo d’Yvoire, one of the members of the committee presiding over the meeting, said.

The importance of sensible campaign regulation was underscored by the reminder that during last year’s Campaign Week, three list members at the Neoma School of Business in Reims died in a car accident. A provision banning the use of cars by list members, on the grounds of fairness and safety, passed with a two-to-one margin.

One of the most contentious parts of the night was the discussion surrounding the regulation of lists’ treasury funds.

After the introduction of several much-debated amendments, including increasing the spending limit, expanding the area of sponsorships and prohibiting the use of family contacts, the initial draft drawn up by the Campaign Committee remained largely untouched.

“I feel like the whole reason [this campaign] is there is so that each list can do their best. Leveling the playing field to avoid [competition] I think is detrimental,” Euram 1A Aman Badami said, “but it’s still important to have checks and balances in place so that it doesn’t get out of hand.”

Another much-discussed topic was that of quotas, which mandates that the makeup of each list include members of both sexes and both programs.

“[Quotas] causes you to nominate people in the Exec who shouldn’t really be there,” one vocal audience member said.

Finally, a compromise necessitating lists to have at least one person of each gender in the executive branch passed. The requirement that thirty percent of the list must be Euraf students was challenged but ultimately left unchanged.

The Campaign Committee is in charge of enforcing these rules. After repeated infractions, they are empowered to remove votes from the guilty list’s total count. An amendment gave lists the right to appeal such decisions.

After an exhaustive two-hour session, in which no one was allowed to leave the room, the final draft was passed.

“I just hope that the lists understand why we put all these rules,” said Student Life Coordinator Anne-Charlotte Amaury, who also presided over the event, “and why it’s important to follow them.”

However, the rules set in place by the assembly and the election it governs affect more than just the lists and their campaigns.

“Even if you don’t campaign, I recommend to the 1As to pay attention during the week. Read the programs, that matters more than the events, to come to a decision if a list is capable of directing the life of the campus,” Euraf 2A and successful AS list candidate Paul Brac said, “it’ll be your campus next year.”