An Interview with a Disneyland Insider

The magical world of Disney has constantly evolved to stay relevant. As the Internet has become central in our lives, forums and websites dedicated to the magic have popped up.

One such website is ED92 beginning in 2013 as an online forum dedicated to Disneyland Paris and Walt Disney Studios Park. Since then, ED92 has developed into a team of over thirty people throughout France and the UK in the roles of reporters,  IT coordinators, and audio/video engineers (there’s even a pastry chef!). They operate a YouTube channel, an online radio station, and all forms of social media. Recently, I spoke with Ben (who only gave his first name). He manages ED92’s Twitter account and talked to me about the work that he does for the forum, as compared to Disneyland’s official social media platforms.

Sundial (SD): When did you first become a fan of Disney?

Ben: Pretty young actually! My parents signed me up for the Mickey Mouse Book Club so I’ve been reading Disney stories for as long as I can remember. It’s evolved of course with time to other Disney medias and the Parks!

SD: How has the original ED92 forum changed over the past five years?

Ben: The audience for the forum has matured. It has become a discussion between fans who know a lot about imagineering and the inner workings of the resort. So it’s a little bit more “niche” than our other medias. Users can also be a bit more free to dream and talk about future projects on the forum.

SD: What is the process of creating posts for the different social medias of ED92?

Ben: Each media has a dedicated editorial team who works with our team of reporters on the ground to create their own content. That’s why sometimes you’ll see something on Twitter and not on Facebook, or vice versa. Each team strives to produce content that is tailored to the media’s format and demographic. We tell stories.

SD: As the main person in charge of the ED92 Twitter, do you have many interactions with fans?

Ben: I do! I don’t live near the parks so it’s often via discussions on Twitter, but I’ve made some great friends, some of them have joined the team, through ED92.

SD: How have you seen the official social media of the parks evolving along with yours?

Ben: The Resort’s social media team is always looking for the next trend – as we are – to connect with our audience. So of course, they’re watching us and sometimes they’re taking a few ideas from what works on our medias. We take it as a compliment…mostly 😉

SD: When you look at the social media of Disneyland Paris, do you see it moving in a positive direction? Why or why not?

Ben: The Resort’s social media can be frustrating for us fans, because it’s still too often confusing or poorly timed. But there has definitely some progress made since the years when it was just a couple pre-programmed posts.

SD: Disneyland Paris recently launched the adorable duck campaign with much success. What do you think made this commercial more appealing than their previous ones?

Ben: For the first time this campaign is not selling a product but an emotion! It’s a great step in the right direction. It has touched people’s heart because it captured that feeling of visiting the Parks instead of just showing kids running to Mickey. 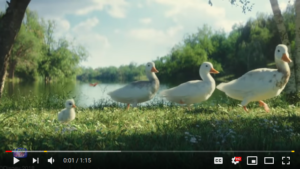 SD: How do you see the theme park’s social media changing in the future? Do you hope to see anything in particular?

Ben: The Resort’s social media seems to be more keen to try new things. I just hope they focus on relevant content and ideas and communicate it in a simple ways. It may sound like a given but it’s important for them to know the product extremely well so they can identify what their audience will react to. Understanding your audience is key – who are they, what do they like, and where does your media fit in their life.

SD: Now for our quick-fire round. What is your favorite Land in Disneyland Paris?

Ben: Donald is always so fun

SD: Tips for any people going to Disneyland Paris for the first time?

Ben: Come early, learn about Fastpass, don’t forget the shows and most of all keep your eyes and ears wide open to enjoy the ambiance and the many details!

Kat Mokrynski is a first-year Euram student writing for the Culture section of The Sundial Press. She was born and raised in Pennsylvania near Philadelphia, the land of cheesesteaks and crazy sports fans. Her previous experiences with journalism include interviews with Javier Muñoz (Hamilton), Kendra Kassebaum (Come From Away), Stephanie Styles (Newsies), and even the great-great-grandson of Charles Dickens. When she’s not studying, Kat can be found petting dogs, listening to Broadway soundtracks, or exploring Disneyland Paris.

Kat Mokrynski is a second-year Euram Staff Writer for the Culture section of The Sundial Press. She was born and raised in Pennsylvania near Philadelphia, the land of cheesesteaks and crazy sports fans. Her previous experiences with journalism include interviews with Javier Muñoz (Hamilton), Kendra Kassebaum (Come From Away), Stephanie Styles (Newsies), and even the great-great-grandson of Charles Dickens. When she’s not studying, Kat can be found petting dogs and cats, listening to Broadway soundtracks, or exploring Disneyland Paris.