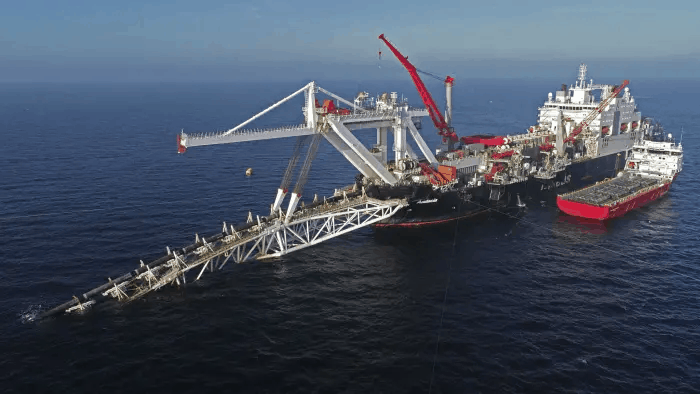 By Matthew TeasdaleMarch 20, 2019 No Comments

Nord Stream 2 (NS2) began laying down its pipes on September 5, 2018 and has been flooded in controversy ever since. Headlines recently have been jumping back and forth from last-minute French bargaining, to a shaky EU compromise, and have landed on Russo-German negotiations which have raised eyebrows as to the German commitment to Europe. The pipeline begins in the St. Petersburg region to descend southward into the Baltic Sea and strike land off the Pomeranian coast in Greifswald, Germany. The construction of NS2 would bring fifty-five billion cubic meters (bcm) to Germany, but European growth and unity have come at odds as the implications of this new pipeline begin to unravel.

The project is supported by Germany and a handful of other European states and promises to bolster domestic industry and serve the economic interests of the EU. However, NS2 is a bad omen for European cohesion and energy independence as less powerful member states bicker over what will become of a massive dependence on Russian gasoline. Ukraine also stands to lose as NS2 diminishes Ukrainian importance to the European energy market which spells dangerous political consequences in the face of an expansionist Russia.

NS2 is nonetheless a plus for the European petroleum market. By 2020, this project is estimated to provide for approximately ten percent lower gas prices across Europe. Additionally, the export infrastructure of Russian gasoline to Europe has faced both temporal and regional constraints which NS2 can effectively handle. During winter months, when demand for gasoline is higher, total pipeline usage from Russia to Europe reached between ninety-two and ninety-nine percent of full capacity. Nord Stream 1 was also at an average of one-hundred six percent usage during the same time of the year. The construction of NS2 is also to the benefit of the European energy industry. German Uniper and Wintershall, Austrian OMV, French ENGIE, and the Anglo-Dutch company Shell each hold ten percent of the NS2 investment fund.

However, a host of countries including Poland, Denmark, Slovakia, Ireland, Sweden, Italy, Luxembourg, Croatia, the United Kingdom, and the Baltic countries have voiced their opposition to the pipeline. In a letter to German Chancellor Angela Merkel, their criticisms include the implications of energy dependence on Russia. NS2 would double the present supply of Russian gasoline to the Germany as well as place Russia as the source of over fifty percent of all EU gasoline. Much of Eastern Europe is riled up at this development and is concerned about the possibility of Russian influence over the EU and Germany. Lithuanian Foreign policy advisor, Nerijus Aleksiejunas, draws upon his own country’s experience of dependency on Russian energy to warn of “the geopolitical nature of the project which will only strengthen Russia’s influence over Europe and on domestic politics of certain countries”. The Prime Minister of Poland went so far as to refer to the Russian pipeline project as reminiscent of the Ribbentrop-Molotov Pact which planned for the mutual invasion of Poland by the Third Reich and Soviet Union.

Germany is Europe’s driving force in support for Nord Stream 2 which has fed fuel for the fire in the alienation of West to East. After attaining lukewarm support from France in return for the application of EU regulations over the project, Germany as well as Austria and the Netherlands all seem keen to solidify the conception of Europe on two speeds. This split between European growth and unity marks a splintering between the different histories on the continent.

For Eastern Europe, gasoline isn’t just a commodity. Considering the 2014 Russian invasion of the Crimean Peninsula and the ongoing war in Donbass, many former Soviet-bloc states are in a panic over Russian expansionism and a return to the Iron Curtain. While the construction of NS2 offers legitimate commercial incentives for the EU, it spells death for one awkward non-member which only faces dangers from this new transport route, Ukraine. As a major site of exchange between Russia and Europe, in 2017, Ukrainian pipelines transited ninety-four bcm, or forty-eight percent of Russian gas directed towards Europe. This mammoth quantity of petroleum isn’t just an economic asset but a geopolitical tool for the sovereignty of Ukraine.

Russia has already used gasoline as a method to antagonize its smaller neighbor. This has included the repeated stopping of shipments to Ukraine as a way strangle the country economically. But with the addition of NS2, instead of directly chastising its neighbor, Russia seems to be looking for a way to isolate Ukraine from Europe. At full usage, NS2 would cripple Ukrainian transiting and reduce gasoline transits to only thirty-eight bcm. Such a figure means losses for Ukrainian gas monopoly, Naftogaz, which claims that the Ukrainian gas transit system can only remain profitable at forty bcm. Already, NS2 could bankrupt the Ukrainian oil transit market, marginalizing the Ukrainian relationship with Europe. In the case of a total redirection of gasoline, which could be possible with the proposed TurkStream, Ukraine could lose two to three billion dollars annually in transit fees, amounting to three percent of its GDP.

NS2 is a turning point in direction for the EU. Germany and a powerful few are determined to enforce a neoliberal order which claims that market interdependence, economic well-being, and global peace will walk hand in hand. Western Europe must learn, however, that this foreign policy comes at the expense of the less powerful as the economic interests of several do not mean the political security of all.