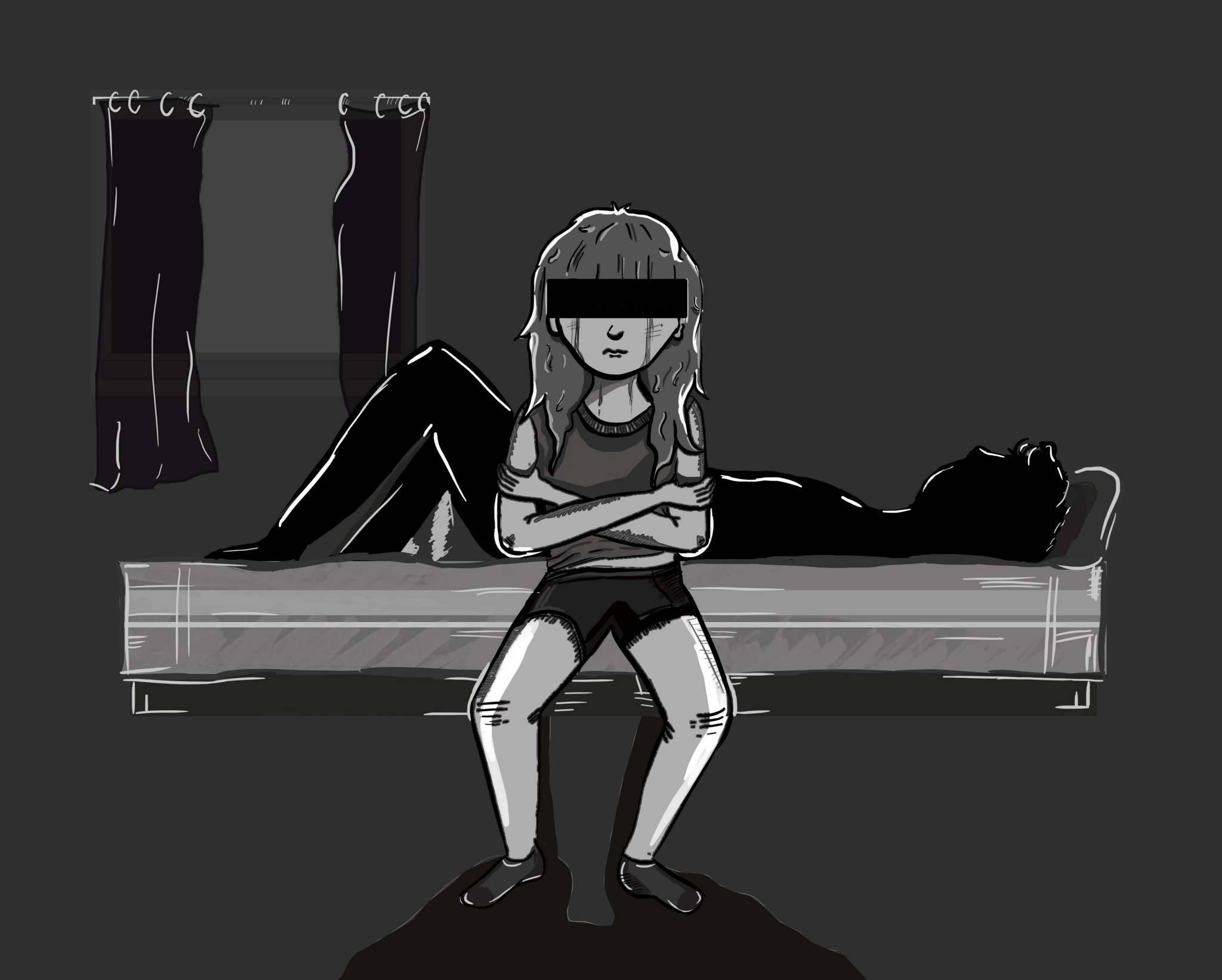 Part 2: Reflections on a near-rape experience

Due to the weight of the article, at the personal request of the author, and in order to protect her privacy, The Sundial Press has decided to publish this article anonymously. The anglophone editor in chief, the opinion editor and the illustrator vouch for its authenticity.

Nowadays, rape seems to be a complicated issue. Of course, pretty much everyone disapproves of sociopaths waiting in dark alleys for women to pass, lonely and irresistible. But, as studies have shown, rape often happens within a person’s social circle, by an acquaintance, a colleague, or even a family member. It can very well be a nice and cute guy. Many feminist writers have emphasized this fact, but I say it now it because I learned it at my own expense.

I do not think I was raped. I did not have unwanted sex. I was not hurt or traumatized – not to say these are required for it to count as rape – and the guy respected my decision and apologized in the end. But although there was no penetration, some of what happened that night felt a bit like rape. I am not trying to draw attention or pity. I am fine. But this experience gave me a lot to think about and I thought it could be important to share it because unlike being raped by some creepy stranger, I think the situation I found myself in is one that many people can encounter at some point in their life, especially during college years.

During the holidays, I went to see a friend and stayed at his shared apartment. One night, we went out with his flatmate and some of their friends and we had a lot to drink. I had sensed the flatmate sort of liked me and although we did not flirt openly, we had joked and teased each other all day. So, in one of the bars, we kissed and he asked me whether I wanted to go back to the apartment. I was quite drunk and tired, and I did want to make out with him so I said yes. As one might expect, we went to his room, took our shirts off and made out in his bed. Shortly after, he tried to go further, and although I said I did not want to, he started taking off all of his clothes. At that point the alcohol started losing effect, so I very clearly remember his comments of “Let it go, I know you want to” and “I’m only asking for two minutes”, as if having sex depended on how long it lasted.

He put his hand in my pants and I had trouble taking it away, given the fact that he was taller and stronger than me and was firmly (or “passionately” as he put it later) holding one of my hands over my head. I am quite strong-minded, and was recovering my senses, but I know there was a real possibility of me giving up my resistance, and accepting the unwanted sex.

Then, something interesting happened. I said I was not ready because I had recently ended a relationship. Then, he stopped. He lied down next to me and started apologizing, saying he had been wrong, and that had behaved like an asshole. It made me wonder, was it the weakness displayed in my words that made him change his mind? Did he consider his insistence bad only because I brought out a sort of fragility? Must I show a weakness that would be clearly wrong to abuse, in order for the word “no” to finally be valid?

I claimed I was not ready because I intuitively knew it would convince him to stop, and although the relationship part was true, it was not really why I refused. Of course, it influenced my refusal, as did the fact that he probably did not have a condom, and the fact that I did not know him well enough, and that I knew I would feel bad afterwards, and so on so forth. But the truth is, I said no mainly because I just did not want to have sex. And he did not seem to be able to understand and respect that. After that, we kissed some more and I let him undress me, even though it made me feel uncomfortable. Then I went back to my room.

I think when something like this happens, one of the worst things is the post-facto contemplation. Even for the victim, it is sometimes hard to accept the term ‘rape’. I think the idea of helpless men tempted by seductive, evil women is so embedded in our minds that I, at least, had to repress the guilty feeling of having turned him on and let him down. Maybe it was not nice to let him get his hopes too high, but I never said what I wanted either. In the end, he did not ask and I had not realized that apparently, there are guys for whom, as long as there is no penetration, then ‘nothing much’ has happened.

For every guy, even those who respect women and never thought of themselves as rapists, here is a quick reminder: