Our responsibility as Sciences Po students

By Pierre SarlièveApril 2, 2019 No Comments 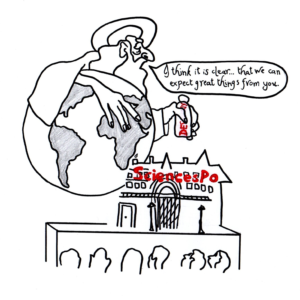 “I reserve myself the right to exploit the foolishness of others, and I see no issue in doing so.”

That is the sentence I heard a friend of mine pronounce, in all seriousness, about their future plans in life. This does not appear to be something particular to certain individuals, and is more a general trend of thought that appears periodically in the “elite class”. It is profoundly worrying, and this article will explore what can be considered our responsibility as students in “elite” schools.

First of all, we do not always grasp the tremendous quality of the education we are receiving on this campus. It is not only knowledge and critical thinking – transmitted by some of the world’s top professors – but also the attitude on campus itself. The Jesuit setting laced with Sciences Po symbolism serves to fill students with the notion that they are, effectively, somewhat special. The multiple leadership and executive roles a typical student has in associations will only help them endorse the future responsibilities they will have.

Undoubtedly, this provides a Sciences Po student with an enormous advantage, as well as tremendous capacities to make themselves attractive on the job market. In fact, Sciences Pistes have the privilege of not worrying too much about unemployment or a lack of choice in opportunities. This is a privilege that we must be conscious of, along with the reasons behind us having it (prestigious diploma, a toolbox of skills recognized on the job market, self-confidence…)

Furthermore, if we take a step back and think about the ways in which we were chosen to enter this school, including the numerous pieces of evidence of us not being entirely self-made individuals, we should consider ourselves lucky. For instance, it is well known that the social origins of high school students affect the chances they have of entering elite institutions. According to Sciences Po’s own numbers, this has not changed very much in the past 30 years.

It is also clear that entering into such institutions is sometimes due to seemingly small, but significant factors. To illustrate, we know one acquires much of their culture générale through healthy reading habits and if we compare the social origins of individuals to their reading routines, we realize there are clear correlations. One tends to have to start reading early in childhood in order to carry on later in life – as show on the graph below – and this is largely due to family influence.

Survey on the living conditions of households, Source: INSEE (2000)

Before someone critiques this argument heavily, it is not to say that individuals did not work hard to be admitted into Sciences Po, but that it was not the only requirement. Simply recall our sociology courses in Year 1, or read David Guilbaud’s interview on the state of meritocracy in France, and recognize that we owe part of our admission, and success in general, to favorable circumstances in our life.

In Pierre Bourdieu’s “La Noblesse d’État”, one finds clear documentation on the skills necessary to enter into schools of excellence, and how those skills are transmitted to children through means that can be characterized as more hereditary than meritocratic. It is clear, the idea that students are recruited fairly among all classes of society is not so far from a myth.

In light of this, we should think deeply about our role as a Sciences Po student in society. It is not productive to carry a discourse of shaming the “elite class”, as it does not bring forth any solutions. However, it is much more judicious to recognize that we carry a responsibility to work, not only for our own interests, but also for those of the community. This is what Noam Chomsky so rightfully explains in The Responsibility of Intellectuals.

“Intellectuals are in a position to expose the lies of governments, to analyze actions according to their causes and motives and often hidden intentions”. This serves as a guide to our own actions in the working world, as – through our experience at Sciences Po – we are granted numerous tools to influence change in various institutions of democratic societies.

These societies rely on the virtue of elites, if they happen to be inculcated with a feeling of responsibility towards others. However, we have some testimonies demonstrating how this responsibility also instills a feeling of superiority. For an example, just read the autobiography of George Orwell, where he recounts the ways his superior status was formed at St. Cyprian’s. This consequence also appears in the ways our leaders talk about the people: Mr. Macron – with his little, provocative phrases – is a perfect picture of what Sciences Po can produce. It seems more judicious to encourage empathy for common humanity, especially since that empathy can be produced by bringing people together from all walks of life.

As Sciences Po students, we ought to be able to show some signs of empathy for the people we will influence. Influence because most of us will become leaders: this does not need to be debated. The words of my friend show that some people are incapable of that, and do not grasp the responsibility they have together with their privileges. The young students protesting in the streets for action against climate change, the discontent of Gilets Jaunes and “the losers of globalization”, the widespread distrust of citizens towards their elites; are all reminders of the interests we will have to serve when we enter the ruling and/or intellectual environment.