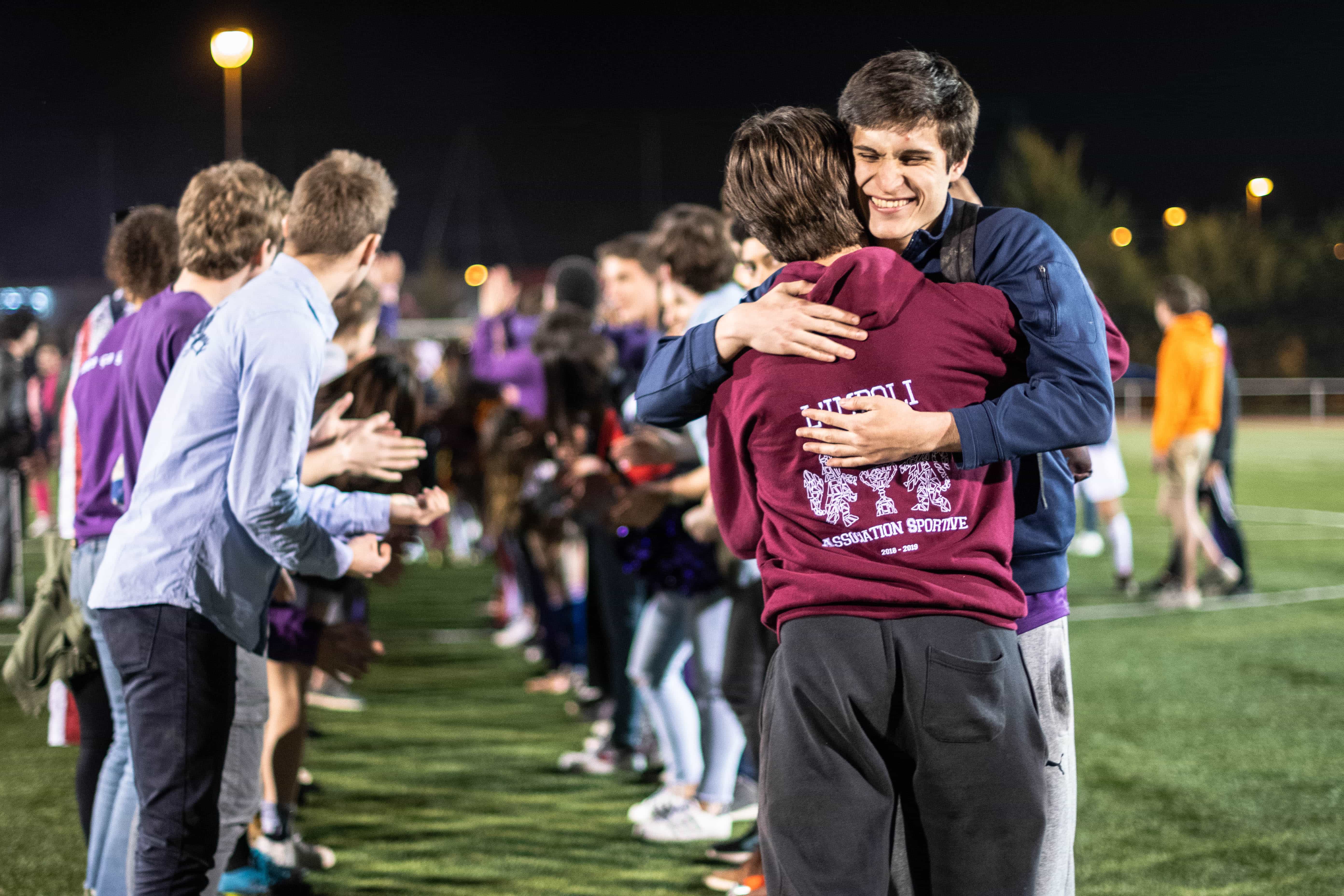 A Weekend at the World Wide WEIC

By Sophie HarringtonApril 4, 2019 No Comments

During the weekend of March 30 to 31, the city of Reims was buzzing with students from the seven Sciences Po campuses who were visiting the City of Kings for this semester’s WEIC event, entitled the World Wide WEIC by the Reims Campus AS. The games were held at two complexes: the Complexe George Hébert, used for the rugby and football matches, and the René-Tys complexe for volleyball, basketball, and cheerleading.

On Saturday, the first day of the two-day event, both women and men’s rugby and football competed under blue skies and temperatures up to 20ºC. Certain players even left the event with rosy cheeks and bronzed arms after a day of playing in the sun. Right at noon the games began with both men and women’s football starting with a Euram v. Euraf battle. As the day went on the Euram teams continued to advance to the next round. While the sun was starting to set in the early evening in Reims, the Euram program swept the matches clean, coming out with four wins in both women and men’s rugby, and women and men’s football.

After the back-to-back WEIC wins for the Euram women’s rugby team, a few of the players were asked about the strengths of the team that allows them to keep winning. Team captain Chloe Le Pape remarked, “I think our main qualities are determination and complementarity. We played this WEIC at home like the Minicrit last year which brought up wonderful memories for some of the 2As and we wanted to share this unique experience of winning at home in front of our campus with the players who joined us this year!”

Additionally, despite not winning the overall title, 2A student Anique Baillon exclaimed how happy she was to see the Euraf women’s rugby team have shining moments of success throughout the day.

At the end of the games on Saturday night, following the  Euram men’s football team victory against Poitiers in the final, purple smoke filled the air with the excitement of winning all four competitions of the day.

The event of the night was a “Barathon” presented by the AS and a MMM 2.0 party hosted by Afrobeat.

At the Barathon there were reductions on drinks at the Bodega, the Hemingway, and the Cochon a Plume. As first year student Pauline Lecouvé remarked “I haven’t seen this many people outside Bodega since the integration week.”

On Sunday, the games started quite early after a long night of partying for those who ended the night at Vogue. At 8:30 a.m. members of the Reims Campus AS were setting up the breakfast and welcoming the players into the René-Tys complex for another day of competition.

Unfortunately for the purple wave, the only event Euram did not win overall in was volleyball, which was lost to Nancy in the second set.

The final basketball match was the ultimate Reimois battle: Euram vs. Euraf. Sadly for the Elephants, the Beavers won the match. However, first year student Laeticia Simo Kouam, a player for the women’s football team, said that her favorite part of the event was at “the end of the WEIC, when Euraf and Euram all celebrated the victory of Euram as the victory of the campus while singing ‘on est chez nous.’”

Despite the fact that no other campuses brought their cheer teams both the Euraf and Euram programs brought the gym to life with their “shoot dances” and jumps in the air. The shiny pom poms sparkled as the event concluded with the Reims Campus AS announcing the placements of each campus for each sport and presenting each team with a bottle of Champagne.

First year student Tidora Rifai, a member of the AS and also a player on the Euram rugby team, was asked to comment on one thing she would have changed about the WEIC overall, to which she responded:  “Probably my ankle sprain? Other than that, we were really lucky with the weather and our players won almost everything.”

Fellow AS member Luca Richardson shared Rifai sentiment in adding, “The injuries! I wish everyone could just play more carefully! It’s also always difficult to balance game length and scheduling needs… but we picked the best facilities we had access to, so in the end we can be pretty happy with the result.”

If you’re looking forward to the next inter-campus event get ready for the Minicrit which will take place in Le Havre, entitled the “Namicrit”, from May 21 to May 25. We’ll see you there!