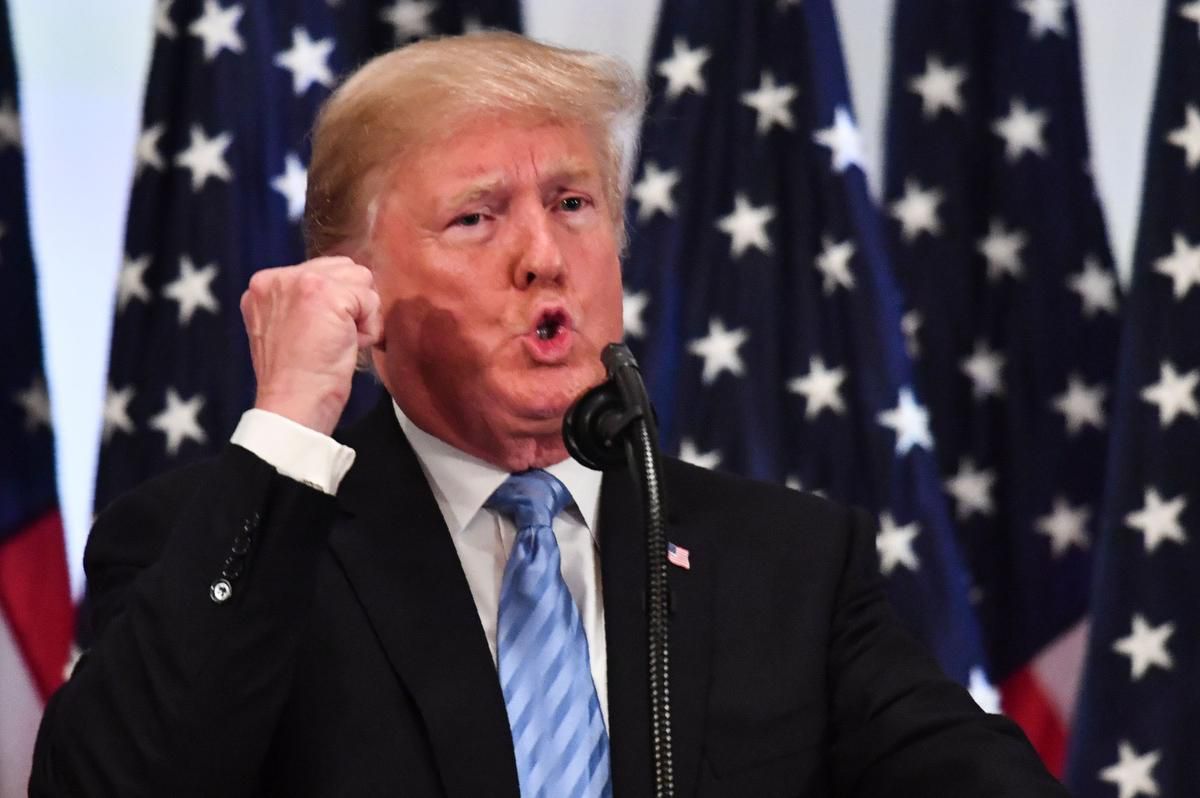 By Regina Isabel MedinaApril 30, 2019 No Comments

Right-wing movements have appropriated the concept of freedom of expression in a way that suits their interests. Empty terms like “political correctness” are often used to dismiss any criticism of their discriminatory agenda. This strategy has been successful in normalizing bigotry in mainstream discourse and has resulted in the rise of white-supremacist attacks all over the world. We must not only reclaim freedom of expression as a universal right, but also push for a more democratic paradigm of free speech.

In his book, The Irony of Free Speech, Owen M. Fiss distinguishes two types of theories of speech: the libertarian and the democratic. The first one states that free speech has value in itself. This right is important because it enables the individual to fulfil his potential and it can only be limited by the State when it affects other rights. The second one values liberty of expression for its function. As the law professors Alejandro Madrazo and Estefanía Vela explain, freedom of speech exists in order to enrich and amplify public debate. It also allows the average citizen to be familiarized with different topics and perspectives found in collective discussions of public problems. According to this theory, sometimes it is necessary to “lower the voices of some to hear the voice of others”.

The Right’s appropriation of freedom of speech

It has become common to hear complaints from the Right about increased “censorship”. What they call censorship is a denial of access to some spaces such as conferences at major universities, or receiving backlash on social media. But those who protest misunderstand what this liberty entails. Free speech does not guarantee the access to any specific platform, it does not obligate anyone to agree with you, nor does it free you from the responsibility of your words.

Williams Davies meticulously describes this phenomenon in an article for The Guardian. What happens is that “the claim that free speech is under attack is often a mask for other political frustrations and fears”. By no means does their claim of being silenced hold up since “the current wave of ‘free speech’ advocacy has coincided directly with the rise of social media and amateur publishing”. The Right has broad access to these platforms, but the change is that others are exercising their right to free speech by calling out discourses that are seen as bigoted, because of its xenophobic, misogynist or antisemitic views.  Using Davies’ words again, this censorship is “quite the opposite – namely, the opening up of scholarly debate to a broader range of perspectives”.

Making clear that there is no actual censorship campaign against right-wing personalities allows us to understand the Right’s peculiar strategy: using the “fight for free speech” as a political tool to serve their interests. Paradoxically, they victimize themselves, while attacking the liberal left for the same sin. For instance, conservatives calling for the resignation of Democrat congresswoman Ilhan Omar, a Muslim woman of color, while worshiping Tucker Carlson and Donald Trump. The same groups that called representative Omar an anti-Semite, spread conspiracy theories about the liberal and Jewish multimillionaire Georges Soros. Omar released a public apology, while Carlson and Trump have shown no regret over their racist and misogynistic remarks. Another example is the infamous Ligue du Lol, a group of white Parisian journalists who systematically attacked – and effectively silenced – female journalists on social media. Those who victimize themselves over being censored, while mocking and silencing minorities at the same time, do not deserve pity. Maybe there is, in fact, a censorship campaign, but it is against disenfranchised groups. So, if there is fighting to be done in the name of freedom of speech, it should not be in favour of those who already enjoy it, but for those whose voices have never been heard.

Finally, the problem is not only hypocrisy. The major issue, which after some history classes should not need to be repeated, is that hate speech rarely remains in its verbal form. As the recent terrorist attack against two mosques in Christchurch, New Zealand demonstrates, discourse sooner or later becomes actions. The libertarian conception of liberty of expression has allowed some milder forms of hate speech to flourish on mainstream platforms. The democratic theory of free speech is, then, better at preventing white-supremacist rhetoric from becoming normalized. 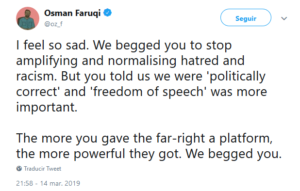 Osman Faruqi reaction after the attacks on Christchurch in New Zealand. Source: Twitter

Let us be clear: hate speech is not protected under any theory of free speech. But the libertarian conception has allowed some powerful personalities to normalize and weaponize it against political opponents. This shameless rhetoric has been successful in winning political power all over the world. Duterte, Bolsonaro and Trump act as cases in point. The democratic theory of free speech could be useful in changing the current reality. When right-wing personalities complain about “censorship”, they are referring to the consequence of citizens and civil associations organizing to counterbalance hateful speech that undermines the rights of minorities. Free speech should be granted to every citizen, not only to the powerful. The fight for freedom of speech is not theirs, it belongs to a society that needs all its members to be heard. As citizens, we should critically engage in the debates around freedom of expression by identifying the platform of each one of the actors involved, starting by ourselves. Let us fight the real battle for freedom of speech.

Cover photo by The Star