By The Sundial PressOctober 10, 2019 No Comments

I pick through the coins I have cupped in my hand as an airport barista impatiently taps at the top of her register. It’s warm inside Charles De Gaulle Airport, a stark contrast to the gray skies cast outside – evidence of the rainy season that approaches northern France. She takes my change and wishes me what I assume to be something along the lines of ‘a good day.’ Although her dialect is strong and clear, I still lack a firm grasp of the French language.

The flight to Lisbon is a smooth two and a half hours. Prior to moving to France, I had heard horror stories of flying with budget airlines when it came to jumping between European countries, yet in my personal experience so far I’ve found Easy Jet to be fairly organized and timely. As I’m descending from the stairs onto the tarmac, the skies are clear and the sun is beginning to fall past the horizon. I find my roommate and travel partner, Savannah, in the public area of the airport terminal. Together, we make our way to the metro station to commence our journey towards our hostel.

We opt to walk from where the metro station lets us off. Reflecting on this now, the twenty-minute walk through the back streets of a foreign country after sunset while clearly appearing as travelers may not have been the best idea but ultimately, we lived to tell the tale. After a seemingly never-ending uphill battle of stairs and steep inclines, we arrive at an unmarked door in the middle of a neighborhood just north of Alfama. Was this it? We slowly lean into the door, opening it into an unlit entryway with marble floors and decorated with unmistakably fake plants. Where were we? There’s a stairwell directly in front of us and above it hangs a white piece of paper with the word ‘hostel’ and an arrow indicating we follow. We obey.

After climbing the three flights of stairs, we arrive in a central room with a smell that can only be described as the inside of a hamster’s cage. Before us is a man with long dreaded hair who is ironing linens. He looks up at us, almost seeming surprised that two girls that have walked through his door. At that moment I nearly share in his reaction. My gut instinct is to turn around. But this is it, we’ve arrived at our hostel. I wonder to myself what we had gotten ourselves into. He shows us to our room and it’s exactly what you would imagine a 1.5-star hostel to look like. There is an entirely different smell inside the room, though equally curious. On looking at the matted rug on the ground, I am compelled to make myself the promise that I’ll never walk about the room barefoot. One flower sits in a yellowing vase and upon further inspection of the room I find an entire power outlet has fallen out of the wall and is lying face down on the ground. We lock the door and I pull the dresser in front for good measure. This is it. This is home. 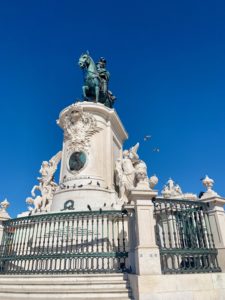 Rising with the sun early on Sunday morning, we begin our day by walking to Copenhagen bakery for breakfast. There were devise a skeleton plan for the sites we would like to see and what we hope to accomplish on the trip. Breakfast is followed by walks through Alfama and the downtown area. We visit Praca do Comercio (the public square), the Museum of Ancient Art, the Christ the King Statue, Tour of Belem, and Jeronimo’s Monastery. Every stop is more beautiful than the last. As the bus and metro lines only run once every half hour, most of this travel was by Uber, which was relatively affordable in Lisbon. After a day of traditional sightseeing, we return to our hostel and try to best prepare for our trip northwest the next day, although it wouldn’t go exactly as planned.

We start that morning later than originally intended and spent a large portion of our time playing catch up. In a hurry, we pack for the day and set out west with two goals in mind:

A train takes us from central Lisbon all the way to Sintra and for a 5 euro round trip, we have no complaints. From there, we cross the train station to a bus that winds through the mountains for almost half an hour, then drops passengers off at the base of the palace entrance. Standing as the base of the Palace and on viewing the hike to come, we were unprepared for the uphill battle to come. In our research of Lisbon and Portugal in general, the number of hills and steep inclines was not something that we took into consideration at the moment even though it may have been wise in retrospect.

The palace is unlike anything either of us had seen before. From the turrets of the castle, you are able to gaze out and look down into the valleys of Sintra. Below are manicured gardens, museum interiors, and an exit through the gift shop. By the time we begin our trek down the mountain, we start to come to terms with the fact that we most likely won’t make it to Ursa beach before the sun sets. As two travelers who have a real love of walking along coastlines, we didn’t want to face this truth.

Exhausted, famished, and largely disappointed by the realization that we had neither the time nor the money to make it to Ursa beach as originally planned, we climb into an Uber and settle for venturing to the town center of Colares – a twenty-minute drive west – in hopes of finding food and a remedy for our low spirits. Instead, following a miscommunication with our driver, we arrive in a residential area of Colares, far from any type of shopping or restaurant. It’s a collection of boarded-up stores, older men on benches with cigars, and a fruit stand closing down for the day. We are reluctant to leave the car. What comes next – whether this was a moment of trust or a moment of surrender – was quite possibly the best thing that happened to us in the entirety of the trip. Via the powers of Google Translate, we communicate to our driver that we were simply looking for some place – any place – to eat. We ask if he knew of anywhere to take us. He tells us to not worry, he knows exactly the place.

Then, the trip became a thousand times better. Within minutes he arrives at a strip of restaurants right alongside the ocean. We are overjoyed at the sight of the beach, the cliffs, the water. We were sure that we wouldn’t make it to the sea on this trip after the day we had experienced. We thank our Uber graciously. We go to the first open restaurant we find and afterward, we practically run to the beach. The sun is just beginning to set and the skies look as though a storm would roll in at any second. The waves are massive, fully demonstrating their power through the sounds of their crashes on the shoreline. We stand with toes in the sand, just close enough that the water and seafoam wash up to our calves. The sea is crystal clear and the air is an energizing type of cold. 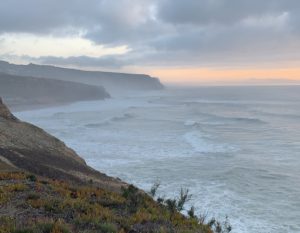 We move on to hike up the side of the cliffs that look over the waters. The lush greens of the cliff’s natural landscaping, the blues of the water, the browns of the rocks, and the warm oranges and yellows of the sunset obstructed by soft clouds all dance together in the most stunning waltz of colors either of us had ever seen. It’s like peeking into some kind of heaven on earth. In the distance, a mist sits on top of the water, disguising the point where the sea meets the land. We watched as seagulls soared in and out of the indistinguishable boundary, flying just above the waves. This was exactly where we were meant to end up. We roam around the cliffs, peering down into the ocean below until the sun falls behind the horizon and street lights begin to flicker on back at the shoreline.

Returning to the main road, we catch a bus that takes us all the way back to the train station. All of our things are covered in a light dusting of sand. Savannah is soaking wet from jumping in the ocean, our legs feel like jelly, and our feet are beyond sore from all the hiking we had done that day. And yet, we both share this feeling of being completely and unmeasurably satisfied with the way in which our Lisbon trip has unraveled.

Karsyn Lemmons is the Community Manager for The Sundial Press. Currently on exchange from The University of Texas at Austin, when she isn’t in class she’s at the local coffee shop planning her next big adventure.