Spirited Debates for 2A Euram Elections

By The Sundial PressOctober 11, 2019 No Comments

This morning saw the Sciences Po political event of the year– debates for the 2A student representative elections. Franka Wacker, Arno Bensoussan, Sophie Harrington, Michael Leung, and Yicun (Chloe) Liu sat in the amphitheater to answer questions regarding their desire to run. Although overall student turnout was low, spirits were high. 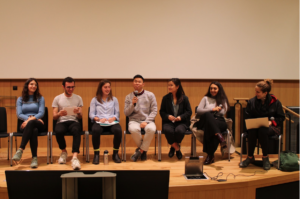 The first question, of course, was one of introductions. Each candidate had a minute and a half to explain who they were and why they were running. Among various responses, Michael hoped to “make sure we all get those short-term benefits,” while Sophie explained that she wants to improve Sciences Po’s policies of inclusion. Arno proclaimed that he was “French, French, French,” but on the contrary, Franka put forth her desire to represent those who don’t speak French. Finally, Chloe explained that she doesn’t “have big plans,” although she has “a lot of creative, small changes” she wants to implement.

The creativity really emerged as candidates were asked what the biggest issue facing the Euro-North American program is, and how to best address it. Michael and Chloe agreed that the general health and mental well-being of students was the first issue that needed to be addressed. Michael wants to create a plan of finding ways for students to help students, proposing a system of announcements that publish good deeds done. Chloe, on the other hand, hoped to “provide people with actual inspirations.” Franka and Arno put forward communication with the administration as the biggest issue. Franka endeavors to “get information about everything,” from midterms to the foosball table, with Arno suggesting Moodle as a way to connect the campus with the admin. Sophie took a different approach, pointing out that “we’re all coming from [various] backgrounds,” and that Sciences Po needs to be better equipped to handle these differences.

As with most pre-election debates, all candidates stressed their dedication, accessibility, and willingness to engage with the student body. The main divides, however, centered around long-term versus short-term change, and the qualifications of other candidates. While Sophie would implement larger-scale, institution-level changes at Sciences Po by working to implement an office to combat implicit bias, Michael is “not here to make sure you have a bigger voice.” Instead, he wants to ensure a good experience, by focusing on smaller issues, such as fixing the foosball table in the student lounge. 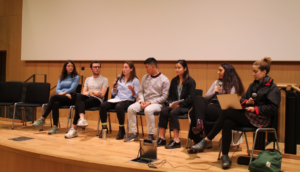 Michael also criticized both Arno and Sophie for their involvement in other Sciences Po organizations. He and Chloe stressed their availability due to a slightly freer schedule. However, Sophie and Arno argued that their involvement was an asset, not a liability– they are already involved in campus life. These disagreements aside, the most interesting question of the afternoon asked each candidate which cocktail best describes their personality. For Chloe, the mojito. Franka identified as a tequila sunrise, Arno a bloody Mary, Michael, jungle juice (especially the kind at frat parties), and Sophie the Grateful Dead.

Regardless of which cocktail strikes your fancy, make sure to vote today. Polls close at 18:00, and the results will be announced at 18:30.