By The Sundial PressOctober 22, 2019 No Comments

There’s a photo stored somewhere in the drawers of my family’s Brooklyn apartment, of me – at least three or four years old- dangling in my mother’s arms. I’m wearing a sparkly gray and pink Birthday crown, and on the ends of my dark, curly hair is the signature accessory of any young black girl- bright pink hair clips. The support and comfort of my mom’s arms give me enough room to toy around with the small yellow object in my hand, my gaze focused intently on its function. My mom stares deeply at me, at the look of amazement on my face, trying to understand my nexus of emotions.

So much has changed since then – years after this photo our family moved to another apartment in Brooklyn, she changed jobs, and I got older, moving from grade to grade, learning everything she immigrated to New York City to give me access to. For the past eighteen years of my life, we’ve been through the highest highs and lowest lows of our lives, relaying onto each other the stories, worries, and fears we carry within ourselves. Throughout the course of my life, I’ve come to piece together the complicated narrative of my mother, thus making sense of my own complex history. As an immigrant family living in Brooklyn, each day we bear the specter of colonialism and imperialism, our lives too deeply entrenched and entangled in a history that transcends us. We grapple constantly between the ideal “American Dream” that was force-fed to us, and the dark, bitter reality of what America truly is, driving our relationship further into complexity, and extending between us a space that can never be met. The story between my mother and I and our family history is one that renders itself parallel to that of Little Dog and his mother, in poet Ocean Vuong’s first novel, On Earth We’re Briefly Gorgeous.

A letter from a son to his mother, On Earth We’re Briefly Gorgeous uncovers a long, complicated family history – one that is traced back to Vietnam and spans across three generations – starting with his grandmother, then with his mother, and which has now imposed itself onto the author. As the main character, he is named “Little Dog,” because according to rural Vietnamese tradition, “to love something … is to name it after something so worthless it might be left untouched — and alive.” A coming-of-age story on the aftermath of colonialism, war, and the trauma that it harbors, the letter attempts to reach out to his illiterate mother, whose education was cut short by an American napalm raid that devastated her school in Vietnam. 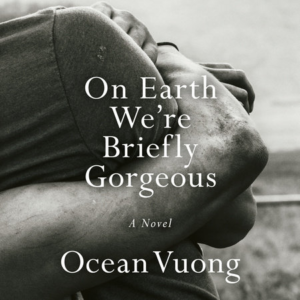 Aware that she will likely be unable to read the letter, Little Dog continues to chronicle the course of his life, everything he never told her, and what she never knew about – such as his all-consuming, whirlwind love affair with Trevor, who he describes as: “The boy from whom I learned there was something even more brutal and total than work — want.” Entangled in the story of his life is the lasting trauma of the Vietnam war, and the harshness and violence of the immigrant experience in America; he becomes intent on defying the gap between generations – a gap born of  language barriers, and varying tragic experiences caught between Vietnam and Hartford, Connecticut – by starting with: “Dear Ma, I am trying to reach you – even if each word I put down is one word further from where you are.”

While his mother suffers from the damage of the Vietnam War, Little Dog describes in detail the crisis of opioid addiction in the United States – a different form of “war” that he must endure. He writes to his mother, at one point stating: “Seven of my friends are dead. Four from overdoses. Five, if you count Xavier who flipped his Nissan doing ninety on a bad batch of fentanyl.”

Vuong, with his previous work in poetry, crafts a heavy, dense narrative with brevity and delicate choice of wording, weaponizing prose, elision, imagery, and unconventional form to match and deliver a fractured story and the maze of emotion that comes with bearing it. Little Dog’s story is one that exists at the crossroads of race, gender, and class – conveying succinctly the immigrant experience in suburban America. His mother works as  a nail technician in Hartford, and takes him with her to work; he writes about watching his mother hunched over in her seat, washing strangers’ feet in the nail salon, “a place where dreams become calcified knowledge of what it means to be awake in American bones — with or without citizenship — aching, toxic, and underpaid.” 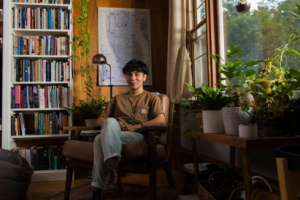 Though the book is marked by death, trauma, and tragedy, Vuong uses his virtuosic mastery of poetic language to renew the promise of hope, freedom, the beauty of survival, and of being alive. Towards the end of the novel, in resonant, captivating language, he writes – “I am thinking of beauty again, how some things are hunted because we have deemed them beautiful. If relative to the history of our planet, individual life is so short, a blink of an eye, as they say, then to be gorgeous, even from the day you’re born to the day you die, is to be gorgeous only briefly.”

On Earth We’re Briefly Gorgeous defies limits of language, history, and the harrowing violence of war and imperialism to connect with his mother in the joy and beauty of life. He tells his mother that the violence they’ve endured together is not the end, for “violence, having passed through the fruit, failed to spoil it,” bridging together two generations ravaged by pain and violence to revel in the beauty of life and survival.