Last weekend, one of the most important Hindu-celebrations (also celebrated by Sikhs and Jains) took place all over the world: Diwali, the festival of the light. For many people, the celebration is dedicated to the Hindu goddess of wealth, Lakshmi, but its meaning goes much further, which became clear to me exactly one year ago on my arrival in Kathmandu, Nepal, where I would start a 5-month-long journey across Nepal, India and Sri Lanka. In my future articles, I will share the experiences I made in this wonderful period of my life. So, where to start if not the beginning?

November the 5th, 2018. I am sitting at the airport in Muscat, Oman, and waiting for the next plane to Kathmandu. I have been refused to board my original flight due to the absurd capitalist phenomenon of overbooking, but I remain positive, somehow convinced that there must be a good reason for it. My premonition is confirmed soon after. When I finally get on a plane to Nepal, I meet Karishma, a 30-year-old Nepali flight attendant working for Oman Air who is going to Kathmandu to visit her parents. I immediately feel comfortable in her presence and when we get out of the plane, she invites me for lunch the next day at her parents’ house. I had not even touched the ground of Nepal and already found a friend, what a blessed life!

When I get out of the airport, it feels like Christmas. The roads are covered with chains of light, flashing in an overwhelming plethora of colors. I have arrived at the very beginning of Tihar, which is the Nepali name for Diwali. Most people only know Diwali, but in Nepal, a country where 75% of the people practice Hinduism, Tihar is celebrated completely differently. Instead of the 10-day long celebration unique  India, the festival takes place for five days. I will present you each of these days separately, as all of them have a specific meaning.

The first day of Tihar is called Kaag Tihar. It is dedicated to the Hindu symbols of sadness and grief – crows and ravens. The devotees believe to avert suffering in their homes by offering them sweets and dishes placed on the roofs of their houses. 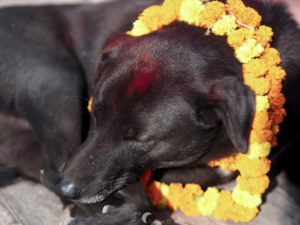 On the second day, Kukur Tihar, the dog is worshipped. As you might know, the Indian and Nepali streets are populated with street dogs and they are definitely not all aggressive and dangerous! When I walk to Karishma’s home on my first day in Nepal, I am surprised to spot many dogs with a red dot on their foreheads (tika), carrying garlands of flowers around their necks. Once I arrive at Karishma’s home, I am welcomed whole-heartedly by the smiling face of her mother. “Chai?” Damn, of course. Little do I know that I am going to drink a hundred more in this apartment. While having our tea, they then explain to me that dogs are celebrated for being the guardian and friend of humans. 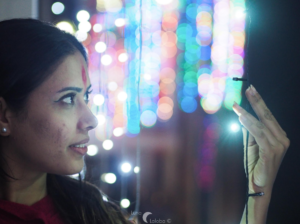 The third day, Laxmi Puja, is the most important day of Tihar, as it is dedicated to the goddess Laxmi. As mentioned above, she is the goddess of wealth, believed to bring prosperity to the families worshipping her. Moreover, this day is dedicated to the cow, one of the holy animals in Hindu culture. In the morning, I move to Karishma’s home after several invitations by her family and leave my impersonal hostel room behind. A little hungover by a night in a Nepalese club with Karishma and her friends, we walk around her neighborhood, observing the preparations of Laxmi Puja, the ritual for the goddess.

Suddenly, we hear children singing and follow their voices. A group of kids stand in the courtyard of a neighbor’s house – their speakers play a song I’ve heard countless times throughout the day: Deusi Bhailo, a performance composed of two famous Nepali songs. They sing, clap their hands and present a traditional dance performance in order to get sweets or money from Karishma’s neighbors that have probably already welcomed 20 other groups beforehand. “It’s like Halloween,” smiles my friend. “All the kids in Nepal do this right now.”

Back home, the whole house is lit up with candles. In front of the door, her mom has created a mandala and painted footprints on the floor. She explains to me that these footsteps are the ones of Laxmi and the lights shall invite the goddess to enter their house. Then, we finally celebrate Laxmi Puja, honoring her with mantras, chants and countless offerings such as money, flowers, food and incense sticks.

On the fourth day, Govardhan Puja, a part of Nepal celebrates the ox. However, on this day, the richness of Nepali culture reveals itself: three different kinds of pujas (worship rituals) are celebrated, depending on the people’s cultural background. Karishma and I spend the day walking around the city, going to temples, eating tons of delicious sweets and dancing with colorful crowds of unbelievably enthusiastic people in the streets of Kathmandu, who carry their instruments and chants wherever they go. 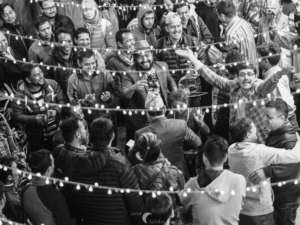 I’m overwhelmed by this tremendous joy shared by all these strangers connected by the simple desire to make music and dance together. In Germany or France, most people celebrate Christmas, but everyone stays within their own homes. People only cross each other on the streets when rushing to different stores to buy last-minute presents for their loved ones. Whereas in Nepal, the festival largely takes place on the street and is supposed to reconnect people without excluding anyone. Even I, a foreign, non-Hindu girl, have found my place in the heart of a family I met a mere 2 days ago.

On the fifth day, we visit the grandparents of Karishma. The whole family assembles in the big house – the parents and seven siblings of Karishma’s mother and all of their children. The last day of Tihar, Bhai Tika, is dedicated to the brother, bhai. The sisters worship their brother by walking around him and giving him a tika, a point on the forehead.

As Karishma’s mom has six sisters and only one brother, just like in an old tale, his forehead looks like a painter’s palette after the ritual. 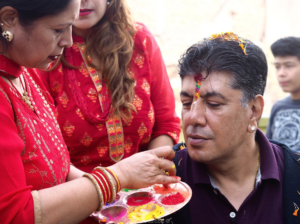 Karishma’s family invites me to participate in the ritual celebrating the figure of the brother. “You are his sister now,” they tell me, which brings me close to tears. And in fact, the whole family welcomes me as a part of their circle, as if I had always been there. After one week in Nepal, I have found a home. In the evening, Karishma tells me an incredible story: 18 years ago, her grandparents lost their eldest daughter, and apparently, in the eyes of every family member, I look like her, pray like her, eat like her, walk like her… I’m deeply moved, and even if I could not be her reincarnation as she died a year after my birth, I have somehow replaced the empty space left by her parting. 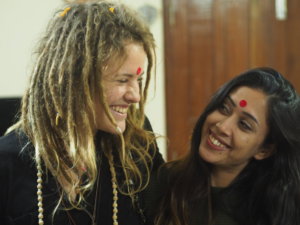 It was really hard for me to continue my travels and leave my Nepali family behind. Karishma’s parents even sent voice messages to my mother telling her “you don’t need to worry, she is happy here, we will keep her!” I’m still in contact with Karishma, she’s now married to a French man and we will soon meet in Paris. After all, the world is so small and the ones we love always stay in our hearts no matter how large the distance. This week of Tihar will always remain one of the most joyful in my life.

A passionate traveler and lover of the art of photography and poetry, Luna Schafitel is a photographer and writer for the Travel Section of the Sundial Press. She was born in Paris and raised in Bavaria, Germany, and is now part of the Euro-African program at Sciences Po. All of the photographs in the article were captured by Luna.