The room fills with applause when Vandana Shiva climbs onto the stage in front of a crowd of Sciences Po students. The welcoming resembles that of a movie star, but unlike most other celebrities she is not here to promote herself. Instead, her message is loud and clear: we cannot avoid the wide issues with the environment and social and economic inequalities any longer. Hence, only battling feminism isn’t enough. But why?

Ecofeminism is very literally the consolidation of the ‘eco’ with the ‘feminism’: in short, it is the idea that environmental degradation as a global issue is deeply interconnected with the oppression of women under patriarchal societies. Thus to solve either of the issues fully, both need to be addressed. In her talk at Sciences Po, Shiva expresses this through a metaphor: “I don’t see that ‘here is environmentalism’ and ‘here is feminism’, and you’ve got to put them together. No, it’s more like water: water circulates everywhere.” 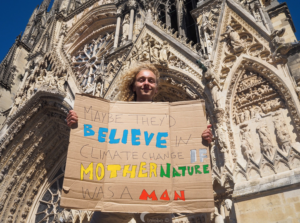 The ultimate reason why ecology and feminism do not exist in isolation is the way that they are rooted in a common cause: the domination of man over both nature and the woman. Most contemporary and westernized societies are built on the idea that the two are ‘chaotic’ and in need of controlling by men. Not only is this the source of the power imbalance between men and women as well as humanity and nature, but it has also created an arbitrary dichotomy between the two sides. Just as the commonly established genders, ‘man’ and ‘woman,’ with their respective roles and expectations, inhibit us from seeing gender as a spectrum, similarly, the concept of ‘nature’ born after the Industrial Revolution divides the world into half: the ‘natural’ side and the ‘human’ side. Nature and man are then shown as opposing forces in eternal competition for survival. As a result, both ‘nature’ and ‘woman’ have been externalized as ‘the other,’ and have been given the purpose of existing for the convenience of others.

In addition to stemming from the same roots, gender-based and environmental issues also exist in a symbiosis: one crisis plays into the other, resulting in a larger ‘negative sum.’ Simply put, climate change is sexist. As the UNDP recognizes, “climate change impacts men and women differently, largely due to their gender-differentiated relative powers, roles, and responsibilities at the household and community levels.” The statistics presented are convincing: 80% of the contemporary climate migrants and immigrants are women, and on average four women and children die prematurely every minute from pollution due to cooking with solid fuels. Shiva addresses this in her talk at Sciences Po, asserting that women, being the primary gatherers of food and water in developing countries, are more affected by climate change. Thus, women are usually at the very forefront of environmentalism. One of the great battles women in developing countries often face is providing their families with drinkable water under the global water scarcity crisis. In Shiva’s words: “every movement I’ve been a part of began after the 10-mile walk for water.”

Conversely, gender issues – namely gender stereotypes – have the ability to generate increased ecological hardship. For instance, the connotations of masculinity and femininity often reflect relationships with nature: the traditional male role is usually the one dominating nature by taking advantage of it. Hunting and a meat-heavy diet are usually considered inherently masculine, whereas vegetarianism and veganism are lifestyles followed by a significantly larger proportion of females. The flip side of the coin, the ‘feminine’ stereotype, also has its influence on environmental degradation: the multinational billion-dollar industries in cosmetics and fast fashion are integral to the ways femininity and female empowerment are characterized in Western societies. Hence we see that gender stereotyping, a ‘feminist issue,’ is capable of negatively impacting the goals of the environmentalists.

Push towards a more intersectional approach 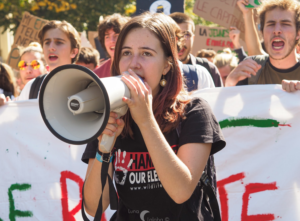 Rosemary Ruether, also an ecofeminist alongside Shiva, stated, “women must see that there can be no liberation for them and no solution to the ecological crisis within a society whose fundamental model of relationships continues to be one of domination.” In other words, the future demands a change, and that change needs to address issues on both the feminist and the ecological front. Ecofeminism does not suggest that women should be pardoned from the guilt relating to environmental issues; indeed, women in Western, urbanized nations are equally part of the overexploitation of natural resources. Instead, both genders alongside institutions should address the layers of inequalities that feed into the climate crisis, as well as the further inequalities that are being created as a result of it.

However, the reach of ecofeminism is far beyond just that of gender and ecology. The inequalities between ethnicities, socioeconomic statuses or for example disabilities are all inherently connected to environmental degradation. Hence the ideology of ecofeminism needs to be pushed towards a more intersectional approach. As Vandana Shiva explains through her analogy, discrimination works like water: it is impossible to separate one form from another.

Finally, we arrive at the key question of why feminism isn’t enough. The orthodox model of the ‘rise of the female’ in the Western world usually sees women as climbing the social ladder in order to reach the same level as men. But in a world where this ladder is characterized by a capitalist and consumerist hierarchy that extracts economic gains from dividing and conquering, exploiting and dominating, the morality of this aim is put into question. This leaves us with the only option of creating an alternative system to replace the prevailing one. For this, we need both ecology and feminism, namely ecofeminism, as well as a consideration of other sources of inequality in our societies. As Vandana Shiva states, under the bright lights of the Sciences Po stage and the eager eyes of the students: