Can We Separate Trump From America?

By The Sundial PressNovember 18, 2019 No Comments 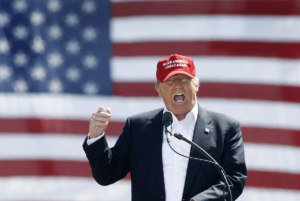 At home, I found that nearly every aspect of my life revolved in some way around the 2016 election. The ways in which Trump’s victory changed the people around me were immediately evident. When he was running for president, I remember laughing at the idea of it with my AP World History class. No one expected that our parents, friends, and teachers could elect a president with such a hateful background, with so much evidence against his character and his proposed policies. The day after the election, we were proven wrong. Just like that. It was like a switch in the country had been turned and suddenly we were all taking sides.

School was the most telling of this change, as is usually the case. Young people know when something is different. You could see friendships falling apart as kids got into physical fights and students were called down to the office, one after another. There was the white boy who resolved to carry his Make America Great Again hat around school because wearing it would be against our uniform policy; he would prop it on his desk during class as if to show the world his support for the new President. There was my black friend who posted #Notmypresident on her Snapchat story and was reported to the police after someone wrongfully accused her of planning to assassinate Trump. There were those, like me, who stayed home that day to process what had happened.

Even now, years into his term, the bigotry and discrimination that Trump has failed time and time again to condemn has made our society sick with division and created a world defined by Trump himself. You either hate him or love him – and if you’re somewhere in between, then you side with those who love him because you don’t hate him enough. Today, it’s obvious that the President who didn’t win by popular vote and has an approval rating below 50% doesn’t speak for the majority of Americans. However, as the head of government and state, speak for Americans Trump does.

Even now, Trump continues to show just how drastically he has altered the very way in which Americans interact with politics. At a World Series game last month, Trump was met with chants of “Lock him up!” when he was shown on the video screen. As political commentator Chris Cillizza points out in his CNN article Why booing Donald Trump doesn’t mean what you think it means, this interaction between the crowd and the president represents not only the public’s dissatisfaction with Trump, but also how people have adapted their reactions to Trump’s new world. Presidents have been booed before – but not like this. 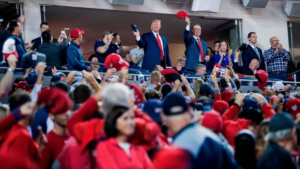 The implications of the public calling for the impeachment of a President at an all-American baseball game, echoing the same “Lock her up!” that the man himself used on Hillary Clinton during the campaign three years ago, are far-reaching. We can no longer pretend that Donald Trump is just a phase in American politics. His ideas and his personality have transcended the office of president and have taken hold of people’s minds, not just in the United States, but around the world.

Living abroad and learning at Sciences Po, a top tier higher education institution for political elite in France and internationally, I only feel more exposed to the phenomenon of Donald Trump. As I was walking home from class with a friend last month, we stumbled upon the almost customary conversation topic for any American studying abroad: Trump’s presidency. Surprisingly, I can only count on one hand the amount of times I’ve discussed American politics and, by association, Trump, in my three months at Sciences Po. Despite being in the Euro-American program, we rarely mention the United States in class, and, until this particular encounter, I hadn’t talked politics with non-Americans.

It was an average exchange for any relatively liberal social sciences university: two people bonding over their shared disgust for Trump, laughing at the absurdity of it all if only to ignore the urge to cry if one thinks about it for too long. Lamenting about how Trump has made the country a joke in the eyes of the world; reminiscing about Obama; hoping that even if the next president were to be conservative, they would at least have some semblance of presidentiality.

This conversation led me to a question about American politics that I always had in the back of my mind, but never fully synthesized: Can we separate Trump from America? From our politics to our social lives to our culture, how much can the image of a people be distinguished from a president’s national and international reputation?

For many Americans, the answer to this question is no. Trump’s election has resurfaced too many old wounds, incited too many clashes, and mobilized too many people for there not to be an ingrained connection between the person and the country. Our politics, our social lives, and our culture have been profoundly altered, if not in substance then at least in perception, and even a nuanced change such as that will affect a people.

The connection between Americans and Trump at a national level has never been more clear to me than the summer before my senior year of high school when I worked as a part-time fellow with the Pennsylvania Democratic Party. As I canvassed and phone-banked for candidates on the 2018 election ballot, every door I knocked on and every number I called had the same reaction. The people of my community cared little about the background of the candidates I was supporting; rather, they tended to listen to my short spiel and then ask directly about the party or a candidate’s relation to Trump. Most were voting Democrat because they hated Trump. One older couple, both registered Republicans, assured me that they didn’t support Trump and said they would consider voting against their party because of me. One man, upon my mention of the Democratic party, cornered me on his porch, and lectured me about all the ways in which Trump had already made America great again and how he would continue to do so when the Democrats lost the election. Little did he know that a few months later our district would be neither in his favor, nor Trump’s. All of these interactions show the way in which Trump has made politics his own game, with the United States as his game board and the people his pawns, regardless of whether they’re with him or against him.

Other countries see this change happening, this game playing out, and it only furthers the seemingly inseparable bond Trump has forged between himself, the United States, and the people who live there. According to the Spring 2018 Global Attitudes Survey done by the Pew Research Center, international confidence in Trump is around 27%. In France, this number is even lower at 9%. The survey also explores respondents’ view of the United States as favorable or unfavorable. In 2018, 43% of international respondents reported an unfavorable view of the US, while 50% have a favorable view. As indicated by global attitudes surveys from previous years, international confidence in the president at the end of Obama’s presidency was 64%, much higher than Trump’s current number. Similar changes for the worse are shown in the favorability of the US at the end of the Obama administration, with 26% of respondents reporting unfavorable views of the US and 64% reporting favorable views. Therefore, Trump’s election has lowered the standard for the president and the country during his time in office. 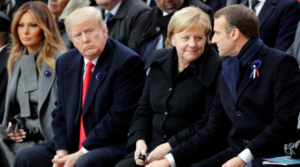 Focusing on the survey results from 2018, the numerical discrepancies between international views of Trump and the United States may show that Trump and the US are separable to some, with respondents’ views of the US itself being better than their views of the president, but this is a surface level distinction. The percentages of international confidence of Trump and the favorability of the US can vary within a respondent group because people’s view of America is formed based on their perception of Trump coupled with how the general public responds to him. People may rate the US as more favorable than Trump himself when they consider the more progressive movements in the country against him. The way the general public and politicians alike respond to Trump, however, is directly linked to the way in which Trump plays politics. This means that internationally, too, Trump and America cannot be separated. Thus, the answer to my question is simply no.

In my daily life, I find that such a statistical approach isn’t necessary to prove, at least to myself, the link I’m forced to share with Trump. The conversation that sparked this question derived from the question itself; I’m American, so we have to discuss Trump. When we do discuss the United States in class, I feel a responsibility to represent my country against the portrayals of our President. Even writing this article, I’m perpetuating the existence of this attachment.

I cannot recall how the conversation with my friend ended, but in a sense it never truly did, and never truly will. Trump has ensured this. Since his election in 2016, America has been Trump, and despite the current impeachment process and the general cries of Americans and international populations against him, he has already altered the very fabric of American politics and culture. Is this change irreversible? That’s a much bigger question, one for our generation to answer in time.

Bialik, Kristen. How the World Sees the U.S. and Trump in 9 Charts. Pew Research Center, 9

Cillizza, Chris. “Why Booing Donald Trump Doesn’t Mean What You Think It Means.”