The English Eloquence contest by SciencesPolémiques: a battle of words, for words, by words.

By The Sundial PressNovember 23, 2019 No Comments

Walking into LS01 Thursday evening, one is immediately met by an atmosphere of daring looks, strong voices, and a western-style battle in the name of words.

Thursday, November 21st held the Grand finale of the English eloquence contest in the LS01 amphitheater. The jury composed of Pr.Paul Ham, Pr. Matthew Baker and Mrs.Anne-Charlotte Amaury was to chose – under close scrutiny – the three best contestants, out of the 5 competing that evening.

The event was kicked off with Ayesha Veera’s and Christina Piliouni’s humorous and dynamic speech, presenting the organizing association, SciencesPolémiques, the jury and the contestants. The rules were simple: every contestant was given a prompt inspired by a TV show and had to articulate a three-minute speech around the subject.

“The past is not my concern,” murmured Carl-Philip Wengler in the microphone, a picture of the Peaky Blinders TV show on the board behind him. Dressed in a 1920’s Birmingham gangster look, Wengler sang, spoke metaphors,  reminisced about the past before concluding with a simple phrase “The past is very much my concern.”

“Let the matriarchy begin,” Money Heist. Between the depiction of the standardized ‘hot girl’ and a comparison to mother earth, Mati Ehinger managed to bring up both the subjects of over-sexualizing women and climate change in a well-written speech. She ended in a committed tone: “Patriarchy has been defined as the rule of the father (…) Maybe it’s time for the mother to rule. Let the matriarchy begin, let the violation end.” A swift round of applause arose for the compelling speaker. 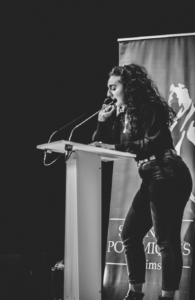 It was time for Med Amine Mahly and his “‘Chic’ means boring. Don’t tell the French” Fleabag prompt to hop on the stage. He screams out a definition of chic, or rather many definitions, punctuating every phrase with a “Chic!”, like a coma in his sentences. “The French never care about what they drink, as long as they can pronounce it properly”. Laughter in the audience. Suddenly his humorous tone shifts to that of praise: he depicts elegance in every manner possible, from the black hat to the scarf flying in the wind in every situation, every moment. One might say, that his speech, from satire to poetry, was true, a chic coup.

“When God closes a door, he opens a dress”, Mad Men. Reem Al-Ameri stares at the audience with daring eyes and begins. “Picture the scene”. It is a story, that of a girl, being disgracefully picked up by a drunk boy at a party, then abused. Don’t they know women like me are attracted to you only if you quote the communist manifesto? And so manifesto it becomes, her speech painting the picture of women being abused by men. “You are not entitled to my body, you do not get to do with me as you please!” Almost anger, punctuated by waves of passion. Applauded by the audience, her message still in the air, she leaves the stage, taller than when she entered it.

“It’s death to settle for things in life”, The Young Pope. Neil Murtagh impersonates Death herself, offering his philosophy in the most humble way: “The real tragedy is the death of possibilities.” Yes, he is Death and has encountered many people during his existence, and what a ridicule spectacle humanity is. 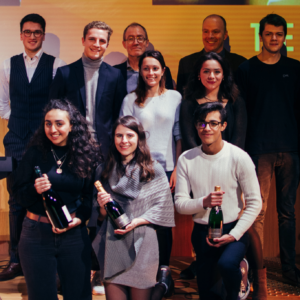 “Would you mind telling me how I’m going to die?” Asks playfully Anne-Charlotte Amaury. Murtagh shakes his head: “Sorry, we don’t do spoilers”.

After a brief intermission by the talented Elefunk, the jury comes back to nominate the three winners, who will receive as a prize, bottles of Champagne. In third place, Med Amine Mahly. In the second place, Mati Ehinger. In the first place, Reem Al-Ameri.

One’s thing sure, we can’t wait to see them preparing for the Richard Descoing contest.