By Emilie RappeneauFebruary 4, 2020 No Comments 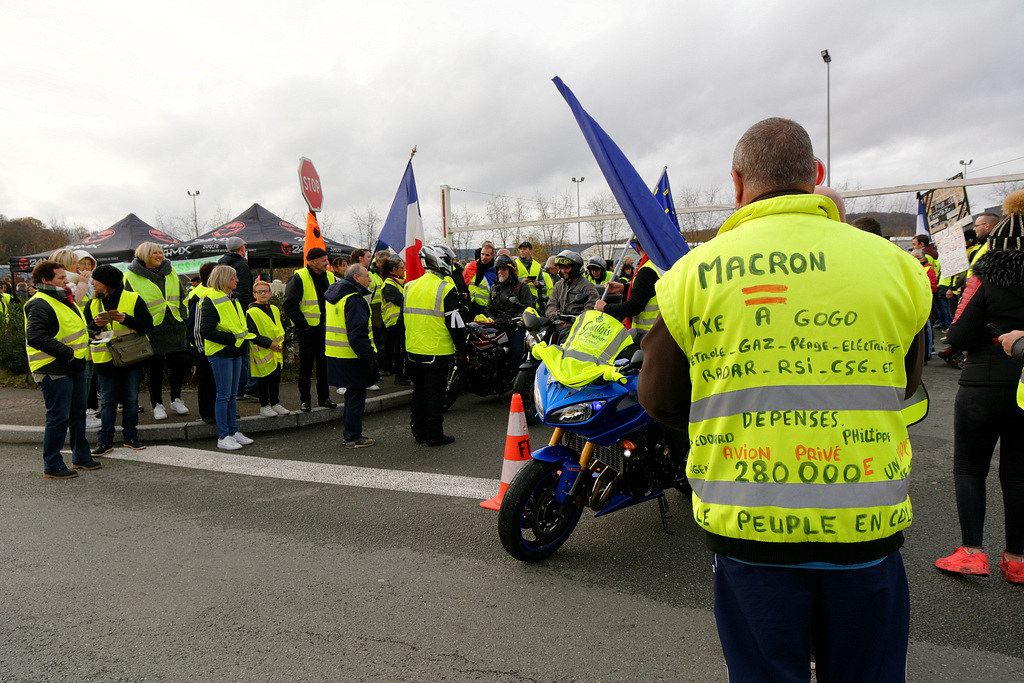 The national strikes, ongoing since the 5th of December 2019, concern many categories of French workers, from teachers, railway, bus and tramway workers to lawyers and firemen. The impressive range of these strikes, in response to Emmanuel Macron’s pension reform, calls for a return to the analysis of a movement sparked in late 2018, the Gilets Jaunes, who articulated itself around the French President’s inadequate decisions as well. Indeed, if understanding the claims of the French lower-middle class seemed crucial then, it is now undeniably the key to overcoming the frustration due to the unexpected cancelation of your Reims-Paris TGV.

“Suffering bodies, ravaged by work, by fatigue, by hunger, by the oppressor’s permanent humiliation towards the oppressed, by social and geographic exclusion, I see tired bodies, tired hands, broken backs, exhausted looks.”

This is how Edouard Louis, French author and left-wing activist, describes the Gilets Jaunes in a Facebook post dating from the 4th of December, 2018. He describes them not as “rednecks” (Jean Quatremer), “far-right or far-left bastards coming to beat up policemen” (Luc Ferry) or as “conspiracy theorists, anarchists and racists sowing trouble in a social movement underpinned by legitimate claims about spending power” (Yannick Delpech), but as bodies crushed under the harmful policies of Macron, Hollande and Sarkozy, bodies protesting every Saturday in spite of the CRS and their tear gas, in spite of Macron’s revolutionary solutions and of the media’s constant mockery.

The Gilets Jaunes have not disappeared, and with the convergence of strikes that started on the 5th of December, I want to call out Emmanuel Macron’s inadequacy towards not only the movement, symptomatic as it may be, but towards France as a whole.

The movement began in October 2018, when the announcement of an increase in the carbon tax provoked outrage among the French lower-middle class. Invoked in the name of climate change but at the expense of those dependent on their car to get to work, this measure spurred un appel aux armes on social media platforms, which resulted in massive obstructions of roundabouts in rural France on the 17th of November, the first of many Gilets Jaunes protests.

The controversial origin of the movement was then used to label the protesters as ignorant hillbillies destroying the government’s good-natured efforts to save the planet. But such a view that reduces the movement to little more than fanciful, erratic whining does not capture the whole picture. The statement ignores the fact that Prime Minister Edouard Philippe would rather take his car than metro, bike, or, God forbid, walk to the National Assembly which is less than 10 minutes away from his workplace by foot. If we take that seemingly innocent fact into account, the carbon tax becomes not a sacrificial measure for our planet’s future, but a sanction inflicted upon those who cannot afford not to pollute.

Nevertheless, some might argue that the Parisian metro and the other forms of public transportation are far too dangerous for a Prime Minister – although though Dutch PM Mark Rutte has yet to be stabbed while cycling to the office. I answer that indeed, Macron’s hypocrisy is better showcased in his party’s refusal to address climate change seriously than by his cabinet’s mode of transportation. For example, left-wing La France Insoumise’s motions to maintain fruit and vegetable transport by train rather than by truck, to nix short flights if trains can replace them, and to prohibit private jets and car ads, have all been successively rejected by the good-natured members of the Assemblée Nationale.

But while the Minister of Ecology, François de Rugy, shakes hands with the road lobby, the Gilets Jaunes are seen protesting for the environment along glyphosate’s fiercest enemies, and alongside Greta Thunberg’s Youth for Change.

It would thus seem that the French government has a few lessons to learn in terms of ecology.

But let’s not forget that rednecks are not only uneducated, they are closed-minded to boot. In the hands of the media, the authentic French people, the good poor, conveniently become the brutish masses – nevermind the local branches’s efforts to dismantle this cliché, or the CRS’s own dérapages, or even the institutionalized top-down racism responsible for Adama Traoré’s death in July 2016. It is only convenient for the government to start caring about discrimination when the poor are to be silenced, lest they should actually make sense.

The final part that makes up the sensationalized myth of the Gilets Jaunes is that they can never be satisfied, and Act 46 proves it. Why continue marching, when Macron has promised, among other things, a 100 euro increase in minimum wage? Why persist when Les Echos, the newspaper owned by Louis Vuitton’s Bernard Arnault, the second wealthiest person in the world, announces that such measures are estimated to cost France  up to 2.7 billion euros?

Unless you take into account the fact that the 100 euro increase is really a 40 euro one added to previous electoral promises, which not all minimum wage workers are eligible for, the persistence of the Gilets Jaunes does not make any sense. Until you realize that the Crédit d’impôt pour la compétitivité et l’emploi, a fiscal advantage given to firms until its abolition in January 2019, has cost between 10 and 20 billion euros to the French state every year since 2013, it does not add up.

But when you consider Macron’s refusal to reinstate the solidarity tax on wealth he removed in January 2018, or his friendship with pharmaceutical giant Serge Weinberg, whose firm Sanofi was releasing 190,000 times more carcinogenic bromopropane than legally authorized in spring of 2018, you understand.

You understand that the former minister of the economy, Rothschild’s young prodigy turned President Emmanuel Macron, has no intentions of listening to the timid ray of political sunshine that the Gilets Jaunes represent, breathing fresh air in stale, elitist politics: labelling the movement as ignorant, violent, closed-minded and costly, is convenient indeed for the Roi Soleil. 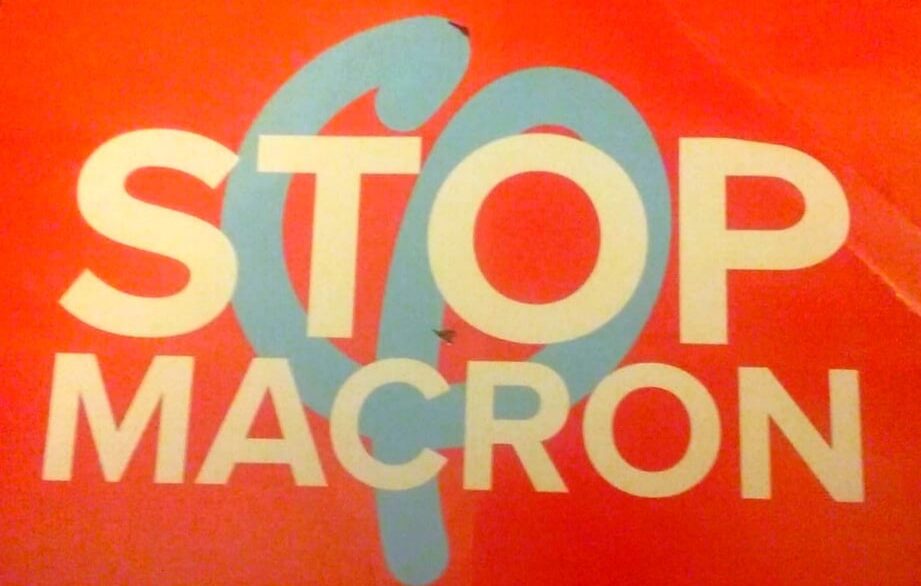 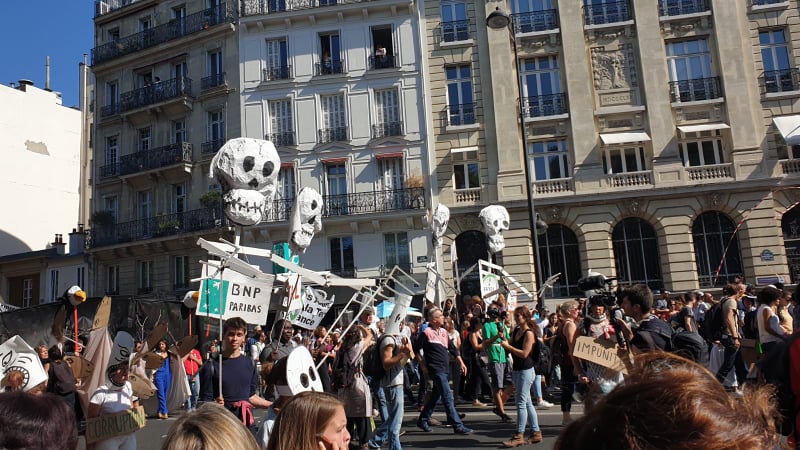