Welcome back to #NextStop! The subject of our inquiry today is a hotspot of tropical biodiversity, a small paradise that is unrivaled in terms of natural beauty: Mayotte. Flanked by Madagascar and the coast of Mozambique, the archipelago of Mayotte is notably composed of two main islands that have been called “Petite-Terre” and “Grande Terre.” You can go from one to the other by taking a public boat – “la barge”-  the opportunity to enjoy a short cruise. 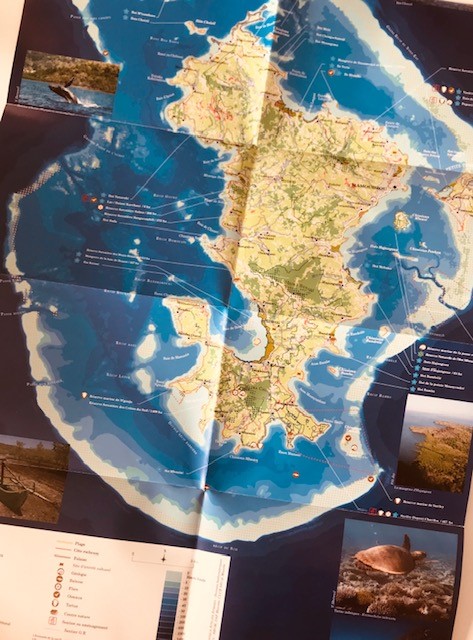 A map of Mayotte. Taken by Jane Weber. 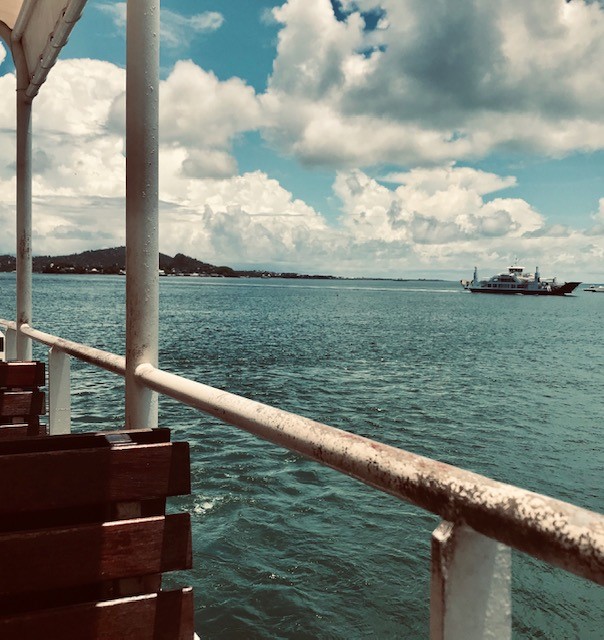 View from the public boat to travel from Petite-Terre to Grande Terre. Taken by Jane Weber.

Mayotte is a French department and an overseas territory that faces important overpopulation challenges. Considering that the lush natural landscape is a precious asset for the island in terms of tourism and local living conditions, territorial planning and the management of environmental challenges are all the more topical for the island.

ON THE MANGROVE SWAMP

While doing research on the website of Mayotte’s tourist office, I came across the International Union for the Conservation of Nature and Resources. Willing to know more about this association and its action in Mayotte, I got in touch with the project manager who informed me that in the next few days, he would be giving a presentation on the mangrove swamp to the members of the environmental local association called ORO.[1] I arrived at the school where the event is taking place and took a seat among the children who came with the ORO association, who were similarly eager to learn more about this ecosystem that can be seen around Mayotte. The mangrove swamp is an ecosystem that has the capacity to protect the inhabitants of the island as well as shelter many species, some of which are endemic. This ecosystem is composed of a type of tropical tree known as the mangrove tree that can weigh up several tones and can reach up ten meters. In Mayotte, there exist over one hundred mangrove swamps covering around 730 ha of the island. Some are wide like the one at the place called Badamier, and some are narrow like the one at Pasamainty. Worryingly, however, the swamp near the coast is going to shrink dramatically in the next 50 years. This phenomenon is mainly the result of human activity and yet another symptom of the climate change emergency we are currently coping with. The rising water level and the waves crashing on the mangrove trees threaten the longevity of this ecosystem. Both are threats resulting from melting ice and warmer oceans, caused by climate change. Yet, apart from that, another type of human disturbance in the region is pollution due to the accumulation of non-recycled waste in this area in addition to urban territory planning leading to the deforestation of the mangrove swamp. 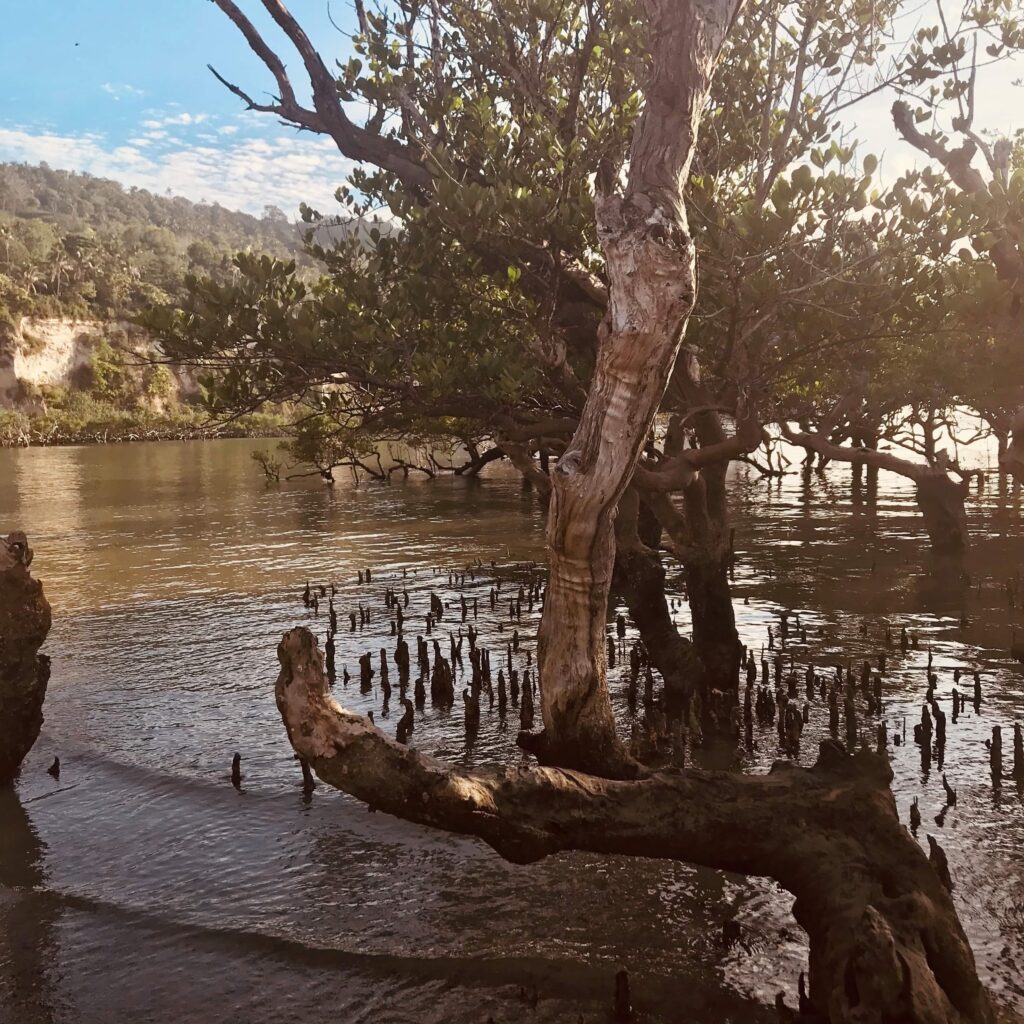 A mangrove swamp at the beach of Badamier and Petit Moya. Taken by Jane Weber. 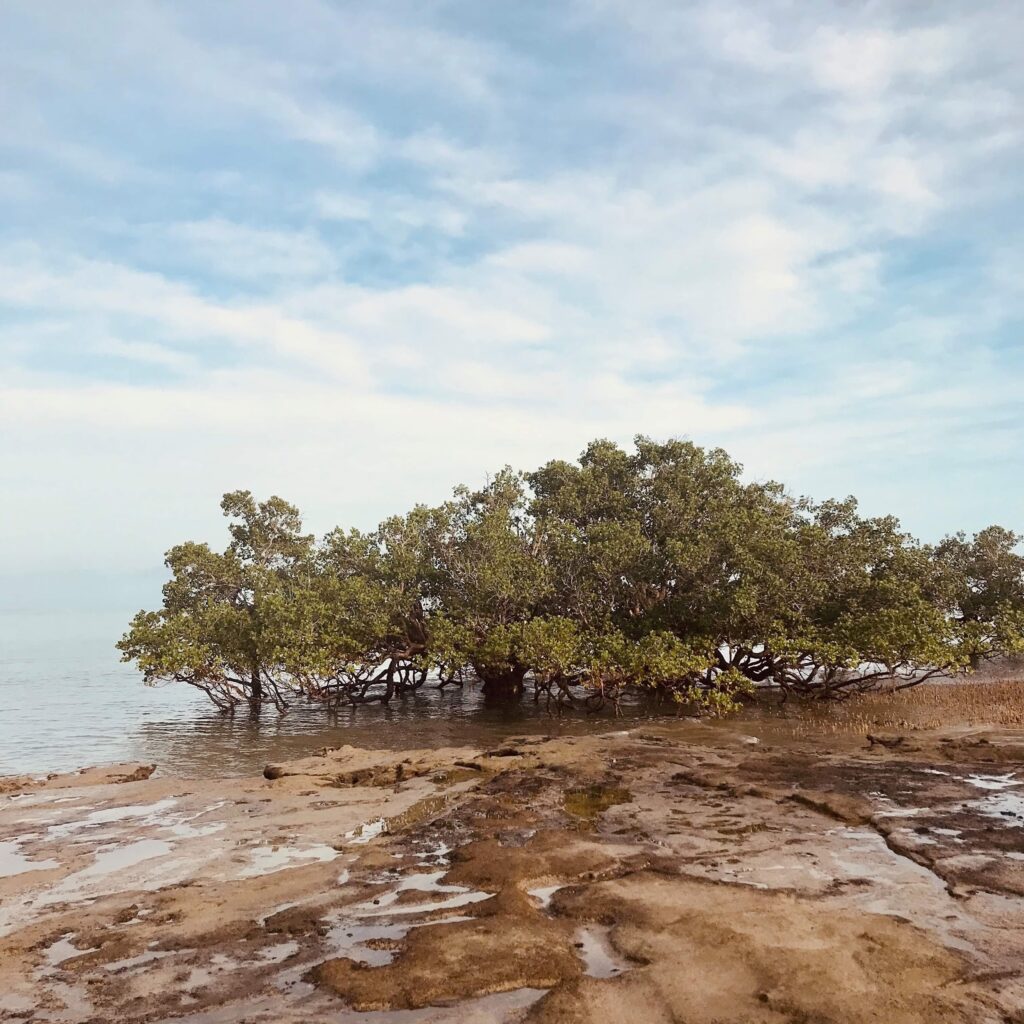 A mangrove swamp at the beach of Badamier and Petit Moya. Taken by Jane Weber.

If the mangrove is damaged as such, we may lose a great resource of species welfare. Such ecosystems house a rich biodiversity: many fish, shellfish and plants inhabit the swamp. I was surprised to learn that this ecosystem generates an amount of income measurable in millions. Furthermore, as an essential feature, the mangrove trees help recover greenhouse gas. Even if it is possible to replant them, it can also be difficult to have all the conditions reunited for them to grow well. In order for the mangrove tree to grow properly, it is necessary to know the species and plant their seeds – called the propagules – in the right place. Thus, to recreate the hydrological conditions adapted to them is no easy task. A high level of salinity of water and the presence of mud is required for this purpose. Even after that, there is still work left to be done. The young trees are subjected to quite unexpected danger… Zebus and goats happen to graze them! All relevant information regarding the mangrove swamp can be found on an observation network created by the IUCN in the form of a virtual reality you can find on the phone application ROM. Thanks to this app, the understanding of the mangrove swamp is made accessible for everyone.

FOCUS ON THE IUCN

One week after the presentation on the mangrove swamp, I had the opportunity to meet the project manager of the IUCN again for an interesting talk on global environmental challenges and his work for the association in Mayotte. Located at Coconi in the West-Center of “Grande-Terre,” the IUCN shares the same office as the Coastal Conservatory. A non-profit organization established according to the French law 1901, the IUCN has an international status recognized by the United Nation and is based Geneva. The first action that made the IUCN well-known is the constitution of a red-list which listed threatened species in order to prevent their loss and established adapted public policies to preserve them. Oriented towards scientific excellency, the organization is careful about its course of action and on the neutrality of the information and research it delivers. Around 200 scientists contribute to the knowledge provided. Thanks to public funding given by the State, local authorities and European funds, they invest in projects as well as long-term missions that ensure the global functioning of the organization. Providing support for local associations is a critical component in enabling them to fully take part in their role in raising awareness and assessing environmental issues to the State and the population.

Defending the IUCN position at the Conference of Parties (COP), the association is also brought to work with parliamentarians and ministries in agriculture and in ecological transition, mainly in the form of bilateral exchanges or associative lobby. Contrary to other types of environmental NGOs, their discourse is softer. It is rare that the issues they work on are brought into litigation. Their legal branch would act as a civil party for the environment in case of a complaint before the court. In fact, environmental law deserves to be better known in Mayotte in view of the challenges the island faces. So as not to repeat the mistakes of the past in terms of development patterns, the popularization of this knowledge will inevitably contribute to the sustainable development of Mayotte. As for funding, communication is the force of the war. More recently, the IUCN has put in place a forward-thinking project called “the biodiversity strategy.” The idea is to conceive an action plan based on a scientific and global diagnostic of the situation which in the long run, will aim at refraining human pollution by reuniting key environmental players and enabling them to act consensually and unanimously. The document is accessible on the IUCN website.

In a nutshell, the way we respond to today’s challenges are crucial for tomorrow at all levels. The anthropic threat is the main cause of environmental damage. Sustainable development is thus the key. For the success of any environmental project, validation from the local population is necessary. On the spot, we can see that local initiatives are taking place. Finally, during the debate for the municipal elections on the television news set of Mayotte 1ère on the 22th of January, the cleanliness of the island and the protection of the environment have been raised by the candidates for the mayor’s office of Mamoudzou as important matters of their agenda. Now we may expect that action will follow political discourse. 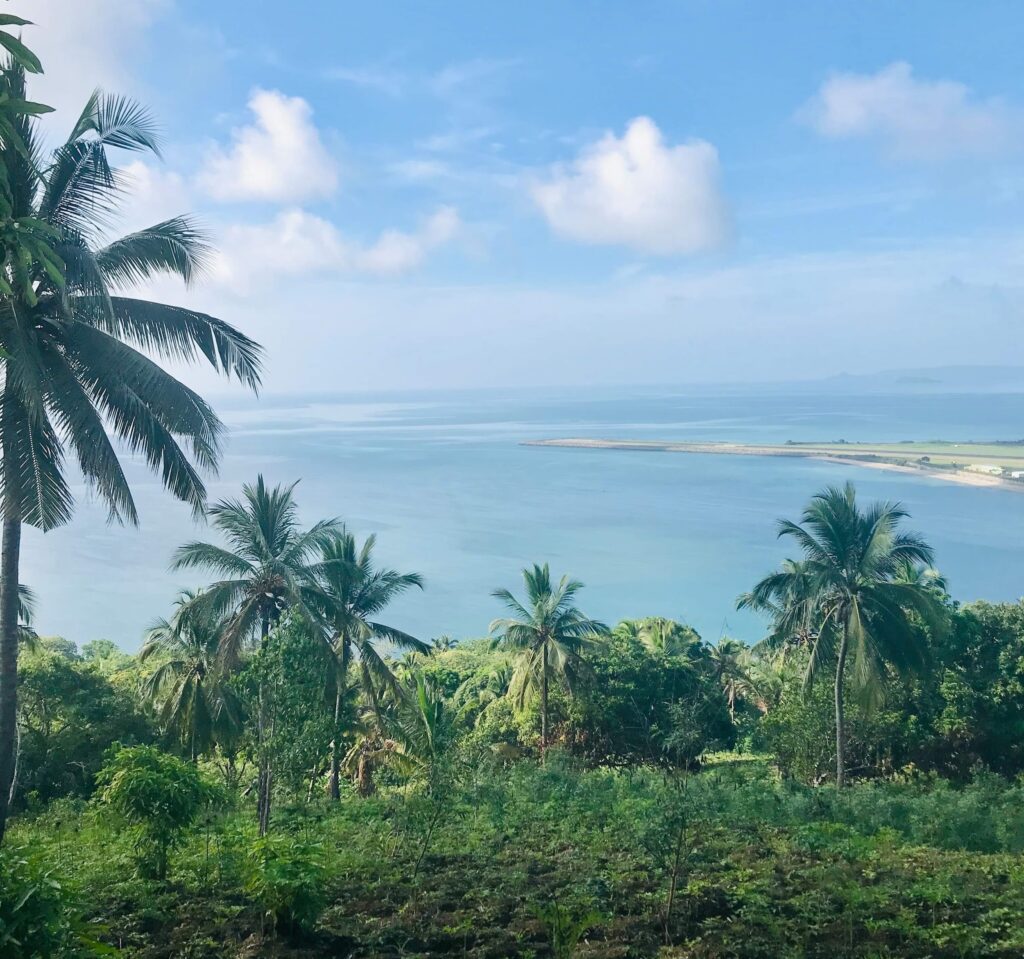 Hiking spot next to the airport at Pamandzi, Petite-Terre. Picture taken by Jane Weber.

Staff writer for the Travel Section of the Sundial Press, Jane Weber loves exploring the world as much as she loves writing. Sharing discoveries, experimenting and confronting various prospects are values that drive her work as an apprentice journalist. Now in her second year in the Euro-American program at Sciences Po, she hopes to contribute to journalism on campus with hard-hitting content and a vibrant stylistic sensibility.