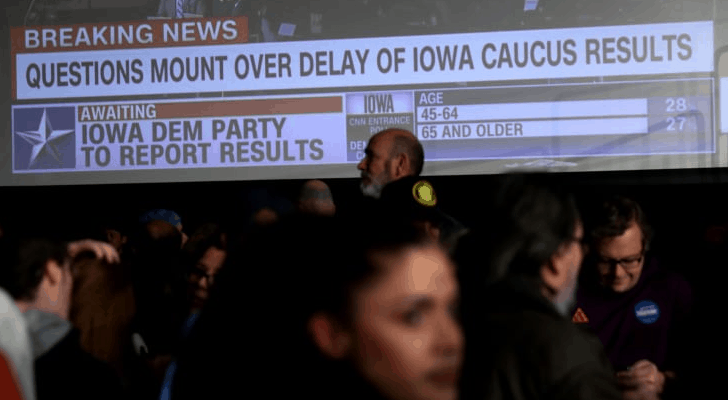 On February 3rd, the US political scene seemed reminiscent of the universe of the dramatic TV show “Scandal,” as the Iowa Caucus debacle could’ve easily been pinned on an Olivia Pope-like character. Indeed, the 2020 US presidential election cycle got off to a rocky start as it faced delayed results and a faulty app. The election results were meant to be reported through an application developed by a company called Shadow. However, workers found themselves unable to download or log into the app, which forced them to call in their results through jammed phone lines.

As flawed as the process was however, it came nowhere near the Fitzgerald-Grant-as-president-situation in Scandal, where new election technologies result in the rigging of a presidential election. Thankfully, the results should not be compromised, as they were eventually properly reported and the use of a paper trail during the voting process in case a recount was needed ensured their accuracy. Nevertheless, this event can be viewed as an illustration of the risks of introducing technology – whether that be in terms of new voting methods such as electronic voting, or more broadly the introduction of new communication technologies –  into the electoral process.

The use of technology in elections has been on a rise since the 1990s and the development of a more readily available internet. Even though 92% of countries still use manually marked ballots, 9% use electronic voting machines and 1% already provide the possibility of online voting. The digitalization of voting certainly provides advantages, namely a considerable reduction of costs when organizing the election, and possibly – even though this is debatable – a greater voter turnout as citizens can vote from the comfort of their own home (this is notably seen in the case of less educated voters who can fill out ballots more easily, facilitating the process for them, as was the case in Brazil[1]). These new techniques are presented as the future of voting by the companies that develop them, such as Scytl, who claims to “power democracy.”

However, the risks of this are still very real and should not be dismissed. The dangers of going electronic were noticeable in the Iowa election: the results being delayed created a power vacuum and a perfect breeding ground for conspiracy theories claiming the results had been manipulated or fraudulent – this wasn’t limited to unofficial sources, as the President’s campaign manager, Brad Parscale, claimed the delay was an intentional attempt from the Democrats to manipulate the results.

This shows one of the biggest risks of increasing the use of technology in elections: research shows that very often, it undermines trust in the democratic system and can make voters distrust the results and whether or not their vote was properly counted. In the long run, this can also undermine the importance of democratic values in a society, as the vote is no longer a sort of a public “ritual” which binds citizens together.

In the context of the rise of populism and the backsliding of democratic values in many countries that were previously considered  democracies or on the path to becoming one, this can become dangerous, as free and fair elections can be put into question by ruling parties and adversaries can be accused of tampering with results without much proof of actual wrongdoing.

We can see this through the practical implementation of technology during elections. The first country to provide their citizens with the possibility of voting online was Estonia, in 2005. The introduction of this was successful and is still used today, and the government of this former Soviet country which gained independence in 1991 claims there is no security risk, as the technology is updated as concerns arise. However, this is an exception rather than the norm, as the small country has access to the resources needed to properly implement the policy and has a rather small amount of citizens and votes to process during election cycles.

One example that can be used to illustrate the dangers of technological use in electoral cycles are African countries in which the use of technology has boomed over the last couple of decades, allowing for a rise in communication and coordination resources. Technology in elections is mainly used by monitoring elections through mobile phones, a technique that is also used by political parties. This poses many risks, mainly the spread of misinformation and fake news through social media, and the use of these new communication technologies by politicians to distort election results. We could say this was the case in 2007 in Kenya, as the Orange Democratic movement announced their own results based on their monitoring activities, before the official results were released. Similar instances of parties claiming to have their own results can be seen in Zimbabwe in 2008. It can be argued that the spread of new technologies and their use in electoral proceedings can empower opposition parties in the short term, but their use by ruling parties can put the effectiveness and the desirability of these methods into question.

As ideal as being able to vote from our own computers and introducing the most high tech advancements into our elections seems, the reality of the circumstances on the ground very often advises against this. The risk of hacking and technical errors is still very present, as the workers staffing polls rarely have sufficient training or skills in utilizing these technologies safely, and populations may not be familiar with the new methods used. This can be true both for voting methods (faulty softwares and voting machines can call into question the propriety of the electoral process) and for the use of information technologies (the risk of fake news being spread through social media for example).

Therefore, we still seem to be a very long way from being able to digitize our democratic process, and that may be for the best, at least for now. As Kevin Roose, a New York Times reporter, put it “after Monday’s Iowa Caucus debacle, I’ve decided that Americans should vote by etching our preferred candidate’s name into a stone tablet with a hammer and chisel.”