Yes, Parasite did win the Oscars – but the real irony still runs deep 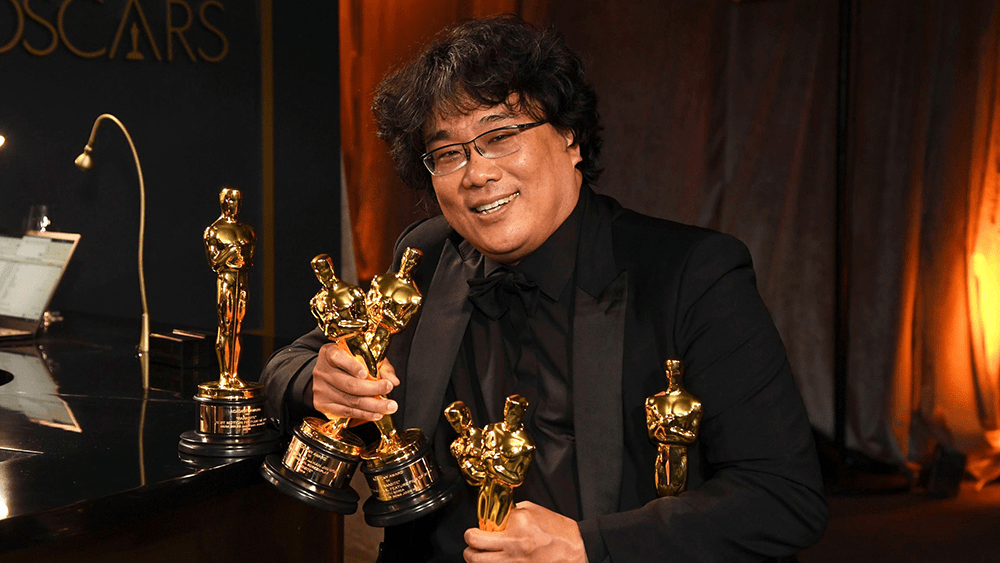 Waking up on February 10th, 2020, was one of the strangest experiences of my life. It started with a text from my dad that read, “you should store up some Korean ramen,” which seemed to come out of nowhere. After a few seconds of scrolling through my newsfeed, it became evident that it was, in fact, a reference to the historic Oscar win of South Korean director Bong Joon-ho’s Parasite, a film in which Korean ramen is used as a cinematic device.

Every image that I could find on my Twitter feed featured Bong Joon-ho with a shining Oscar trophy in his hand and major Hollywood figures applauding him – a scene I could have never imagined seeing in my life. That very night, Bong Joon-ho and his film Parasite won four Oscars, including Best Picture, which was the first win for a non-English film. Last May, Parasite had won the Palme d’Or, the top prize of the Cannes film festival, making it the third film in history to win both Oscar’s Best Picture and the Cannes’ Palme d’Or – a definite sign that it captured the minds of both general viewers and critics.

It would be no exaggeration to say that Parasite made an unprecedented breakthrough as a non-English film in the western world. Even until now, a few weeks after the win, Parasite is still the talk of the Internet – especially for Koreans, as the victory of Parasite is considered to be a victory for Korea and for Asia as a whole. South Korean President Moon Jae-in invited the cast and crew of Parasite to the Blue House – the Korean equivalent of the White House – to celebrate its win, stating that the win made him “proud;” dozens of actors, actresses, and filmmakers of Asian descent openly celebrated the success of Parasite.

However, the success of Parasite has a much more profound effect than just making fellow Asians proud; it is also not like any other successes of non-English, non-White, non-Western media. Almost every foreign filmmaker who saw their success in the Oscars or the Cannes festival never actively spoke out about how the Western film industry should change. They gladly accepted the award, said that it is an extreme honor especially for someone who was a minority, and that was it.

Unlike his predecessors, Bong Joon-ho has been constantly striving to make sure that he is not just another ‘minority’ who somehow lucked out by coming under the western spotlight. Bong himself has repeatedly expressed his opinion about the issue itself. When asked about the possibility of being nominated for Oscars, he referred to the Oscars as a “very local” festival, sparking an uproar on the internet, and allegedly contributed to the name change of Oscars’ ‘best foreign-language film’ award to ‘best international feature film’. Bong also used his acceptance speech for his foreign film award at the Golden Globes to urge Americans to “overcome the 1-inch-tall barrier of subtitles,” referring to the infamous American habit of avoiding foreign films with subtitles. With his masterful choice of words, Bong Joon-ho made it clear that, in fact, he is not a minority. From the perspective of non-Americans, Americans are indeed the minority, which is a revolutionary idea that has never been suggested – especially in a film industry where Hollywood and ‘America’ itself are considered the holy grail of cinema, thus causing the public to roar with laughter and sympathy at Bong’s messages.

Now that Parasite, the most underdog film you can ever imagine, has been officially recognized by the Oscars, can we say that the era of #OscarsSoWhite has come to an end? However, as much as it is an unprecedented victory, that day is unfortunately yet to come.

Ironically, the success of Parasite has contributed to uncovering the underlying racial microaggressions in American society, reminding us that there is still a long road ahead. To name a few examples, a Hollywood interviewer once asked Bong, what “made you decide to have a film in Korean when you had other films in English,” as if making a film in Korean is not as good enough as in English – an ignorant question based on anglonormativity. Another interviewer asked Bong about “the best part of being famous in America,” a question that could only be raised by someone who believes in American centralism. This ignorance is not just exclusively limited to a few clueless Hollywood interviewers, but also shared by Ellen DeGeneres, the most influential “minority” talk show host of America. DeGeneres made a joke about how Bong would never receive a nude pic sent by her since it would have to go through his translator first. The fact that DeGeneres, a lesbian icon who is perceived as a courageous and just figure, would make fun of someone by attacking the fact that he does not fluently speak English confirms how she is just another celebrity ignorantly exercising her white American privilege. And of course, this long list of “Americans being rude to Bong” would have to be finished by the man himself, Donald Trump, who reacted to the idea of a non-American movie winning the Oscars with “What the hell was that?”

Furthermore, we cannot say for sure that Parasite even got the just treatment that it deserved despite the fact that it won four Oscars. The fact that it won four Oscars but not a single actor or actress was nominated proves this point. If Parasite was good enough to win the Best Pictures, it is logical to assume that its cast equally deserved their spotlight as well, which was very much the case of most previous Academy Awards. In fact, for the last 15 years, at least one actor or actress of that year’s Best Picture has been nominated individually. The only exception, oddly enough, was in 2008 with Slumdog Millionaire – a film where the entire cast was composed of people of Indian descent. The fact that the Academy would give the Best Picture to films of racial minorities such as Parasite and Slumdog Millionaire but never recognizes the achievements of the cast shows how the Academy is still predominantly white and is not yet ready to fully acknowledge the talent of people of colour.

Parasite may have broken new ground in regards to #OscarsSoWhite, but the hashtag itself is still standing tall, supported by the racism that is deeply rooted in its past and the people who are striving to maintain its legacy. The fact that a single non-English, non-white, non-Western film won the Oscars should not be considered as the ultimate victory, but rather the beginning of countless battles against countless injustices to come. As U.S. Supreme Court Justice Ruth Bader Ginsburg once said, “there will be enough women on the Supreme Court when there are nine.” Similarly, the Oscars to come should be places where seeing multiple foreign films winning multiple categories is considered to be totally normal. This is not the end. This is just the beginning.