“A rapist in your path” on campus 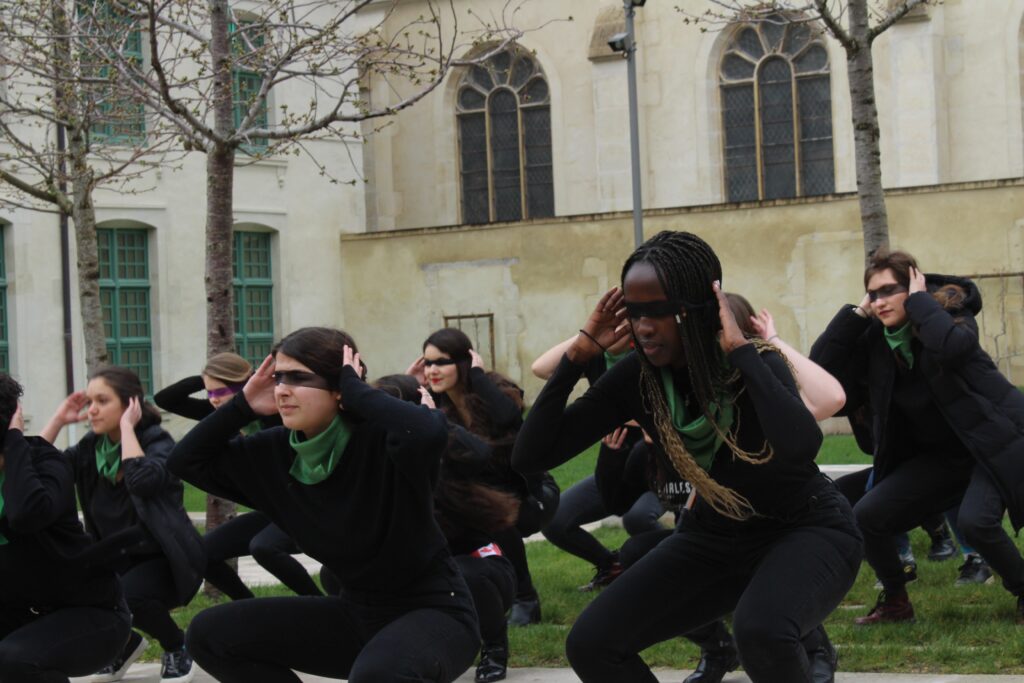 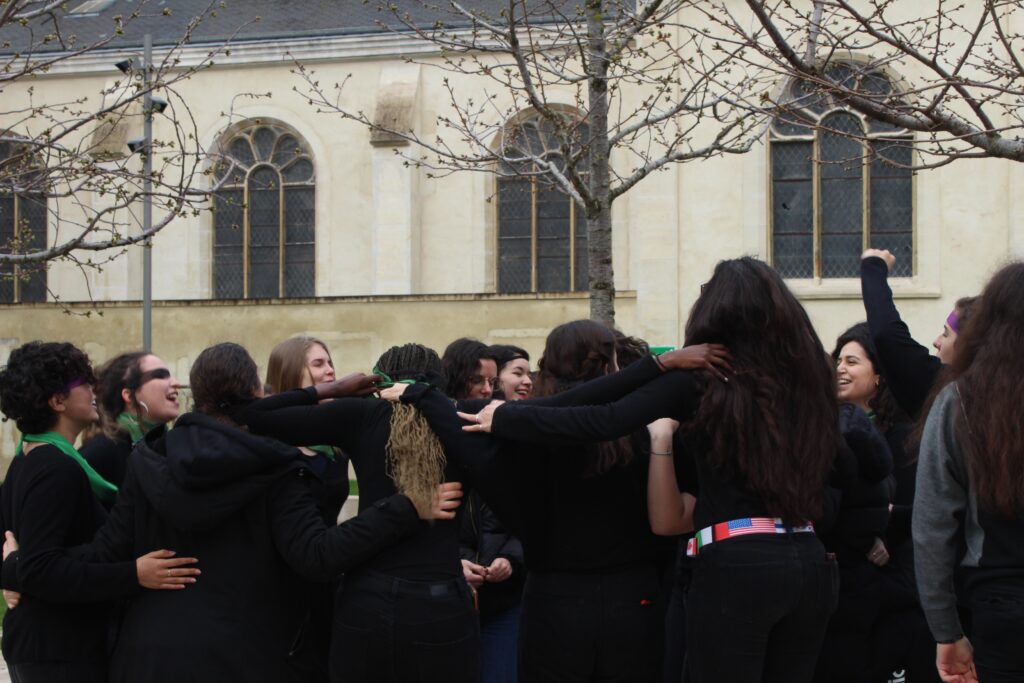 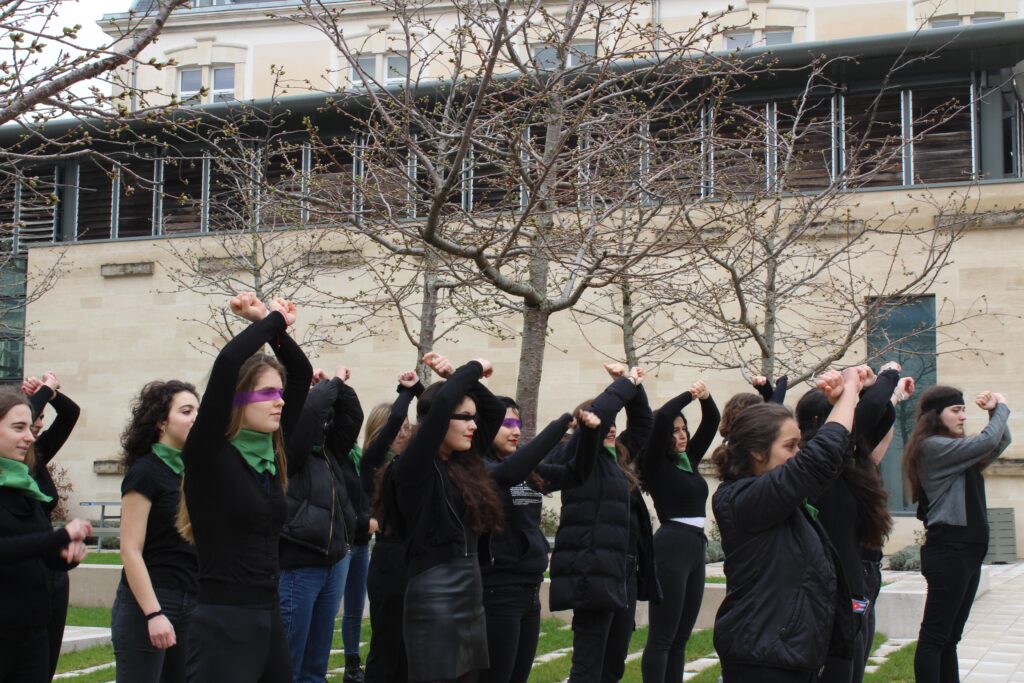 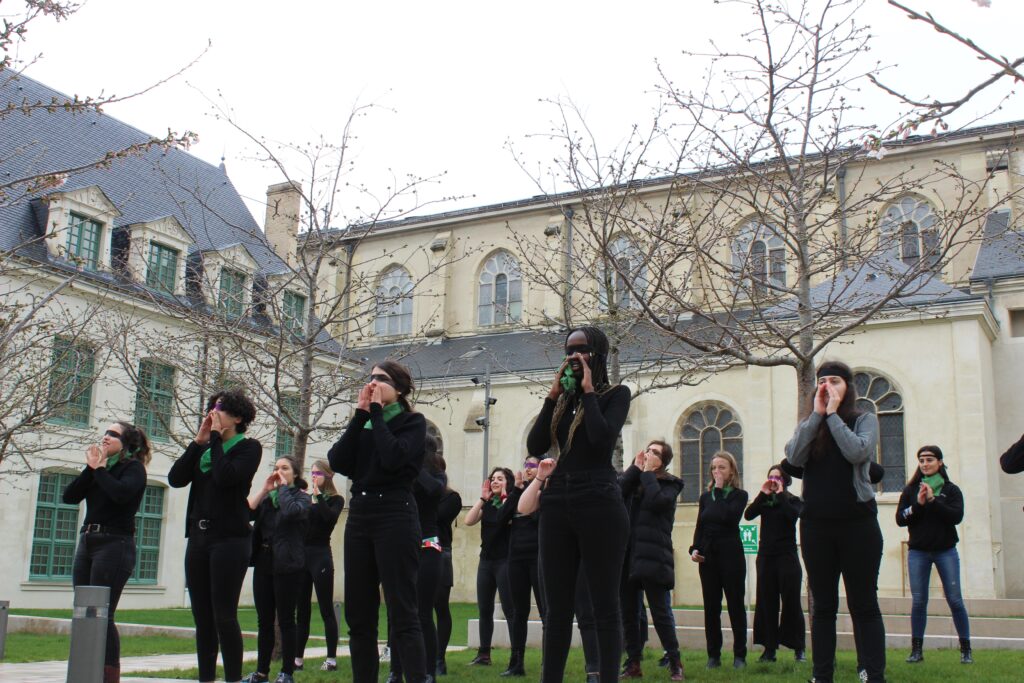 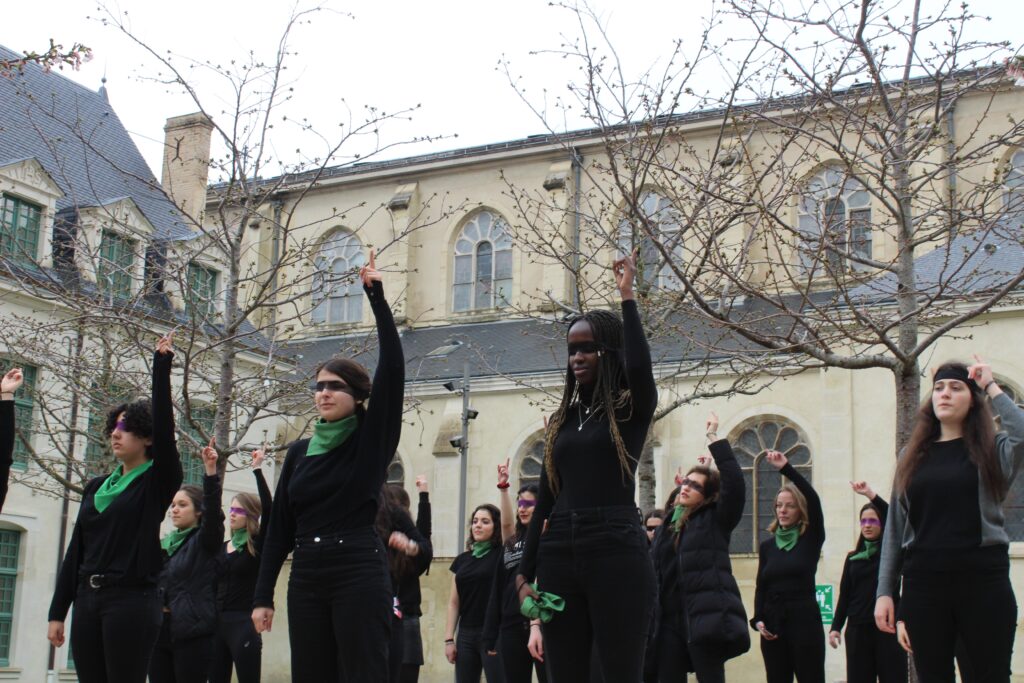 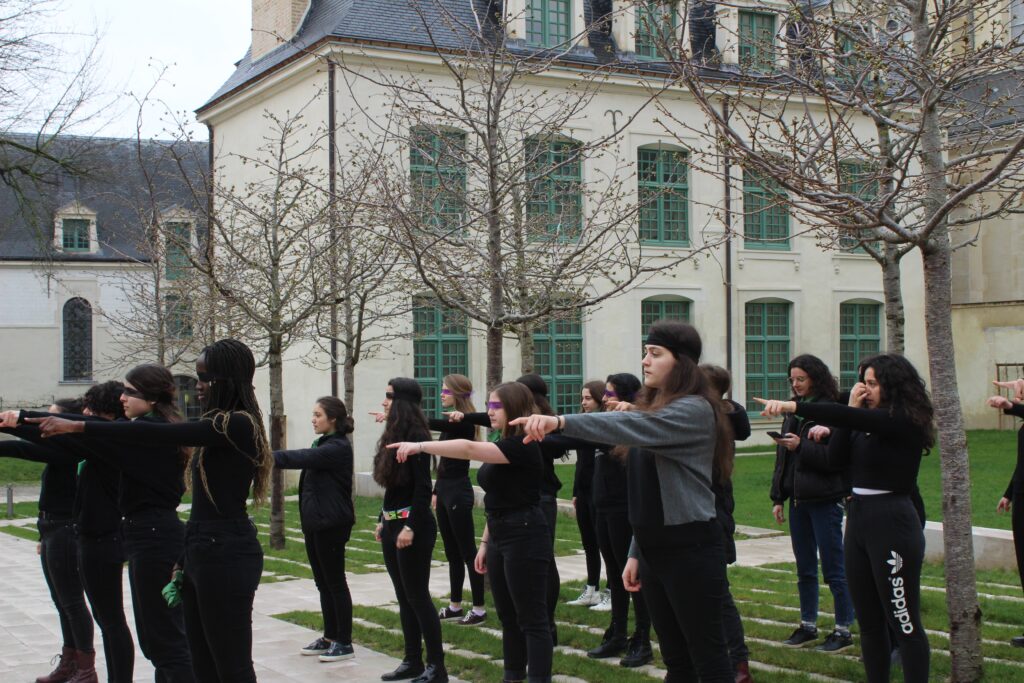 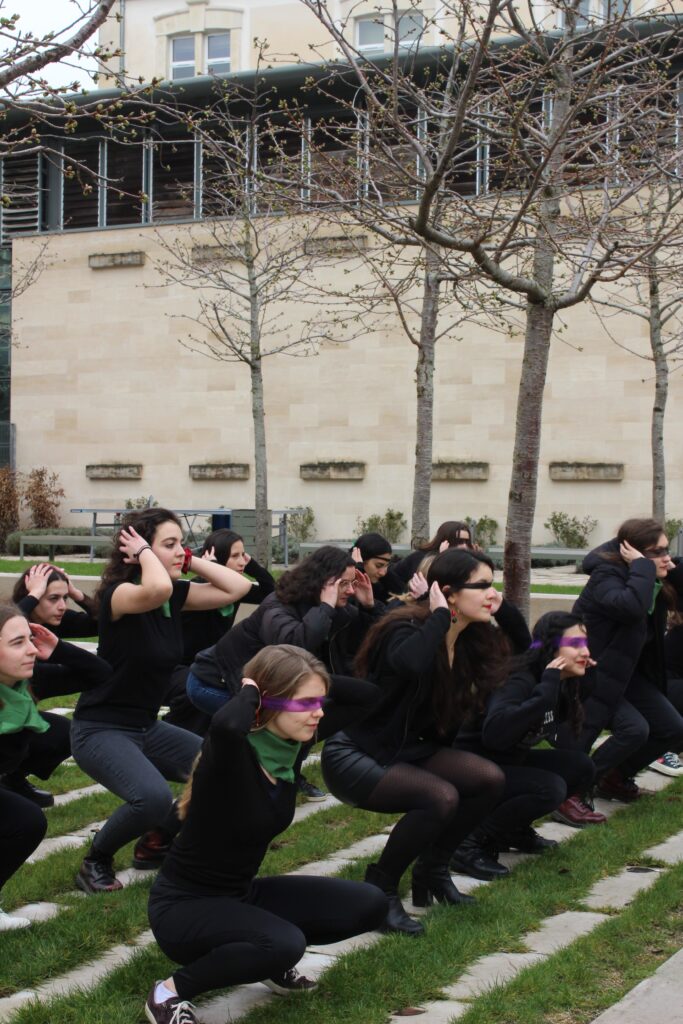 On Friday March 6th, these words were heard throughout our campus as the Latin American Solidarity Association (ALAS) led a performance of “A rapist in your path” (Un violador en tu camino), in the lead up to International Women’s Day. The performance was done in Spanish, French and English, and over 20 female Sciences Po students participated, chanting along to the daring and denunciating lyrics while wearing blindfolds and green handkerchiefs, symbolic of the struggle for reproductive rights in Latin America.

“Un violador en tu camino” is a demonstration that was created by the Chilean feminist group Las Tesis in November 2019. The group, made up of four women (Paula Cometa, Dafne Valdés, Sibila Sotomayor, and Lea Cáceres) launched the initiative as a way to attract mainstream attention towards gender issues and violence that are constantly present in Latin American societies. The movement caught on and became a global phenomenon in a matter of weeks, with women performing in countries such as Mexico, France, the United States and Turkey, showing how a performance referring specifically to a Latin American perspective and experience could resonate with women around the world.

The lyrics address the systematic violence faced by Latin American women, such as increasing femicides, rapes, and forced disappearances. The performance shows the links between these different types of violence, as rape and femicides are two phenomenons that are intrinsically linked, with the former often preceding the latter. The denunciation of a government meant to protect the victims is present throughout the whole intervention, with a message pointing to “the cops, the judges, the state, [and] the president” as guilty. Indeed, the criminal justice systems and governments in Latin America have repeatedly failed victims of gender violence, as evidenced by the numerous instances of allegations not being believed and astonishingly high rates of rapists walking free. Just to give one example of this: in august 2019, a 17-year-old girl in Mexico City was raped by four police officers after they had offered her an escort home, and the government’s response was anything but satisfactory.

The lyrics denounce this by directly taking a verse from the official hymn of the Chilean police force, or “carabineros”: “Sleep calmly, innocent girl/ without worrying about the bandit/for over your dream, smiling and sweet/ watches over your loving cop” / “Duerme tranquila, niña inocente/sin preocuparte del bandolero/que por tu sueño dulce y sonriente/vela tu amante carabinero.” This turns the narrative of a police force supposed to protect its people on its head, as it mocks an authority that has routinely abused its power.

A large part of the initiative and development of this project is due to Chilean exchange student Carolina Held Hasson, who I interviewed for this article.

“This is an extremely important intervention that has travelled the world, and some people don’t know it here,” was her response when I asked her why she decided to propose this project. “Las Tesis wanted to spread this message, and what matters is solidarity among women and showing we won’t allow for these things to happen anymore.”

She explained that she hopes this intervention will make Sciences Po students more conscious about this issue, and curious enough to research it and inform themselves. “I think it’s important ALAS was the one to organize it, given the specificity of the female experience in Latin America.”

Indeed, the Latin American experience of feminism tends to be very different from that of our European counterparts, as gender dynamics and the kind of discrimination faced are not the same. This is for example the case in the context of femicides, as 14 out of the 25 countries with the highest femicide rates are in Latin America. The context is one of growing urgency as recent numbers show a rise in this type violence: Brazil – the largest Latin American country – saw a 4% rise in femicides in 2018. This is not an isolated incident, as both Mexico and Peru have recently seen record high numbers regarding these issues. Indeed, the number of these gender motivated murders in Mexico has doubled since 2015, and Peru, even though it remains the country with the lowest rate of femicides across Latin America, still saw a record breaking rise in the numbers of incidents.

Latin American gender dynamics also differ because of their inherent intersectional nature, as other factors play a critical role in determining a woman’s experience. This is notably the case for indigenous women, who are much more vulnerable to abuse (for example, numbers show that Mexican indigenous women are three times as likely to be victims of femicide than other women). Not only that, but this discrimination continues in the way the violence is addressed by the public, as the government allocates less fiscal resources needed to address this to these communities, and the media and public opinion pay significantly less attention to these cases.

Even though these differences between the European and Latin American female experiences are very much present, Carolina made a point to emphasize the necessity of solidarity across the board, to allow for a global reduction of gender violence and inequality. She especially talked very passionately about slut shaming, and named cases such as the Kesha trial in the US, a rape trial of a 17-year-old Irish girl during which the 25-year-old’s defendant’s lawyer named the victim’s thong as a sign of consent, and the Manada case in Spanish, in which a group of five men raped an 18-year-old-girl and recorded it. One of the judges working on the case asked for the accused to be absolved, as he believed the victim couldn’t have been raped, as her expressions during the attack suggested she “enjoyed it.”

The event was an incredible show of solidarity on the part of women on campus, and showed the diversity of our student body. It was a privilege to participate, and I would like to end by thanking ALAS, all the amazing women that performed, and all non-performing students that made it possible.