An Interview with Draw the Cards (BDA) 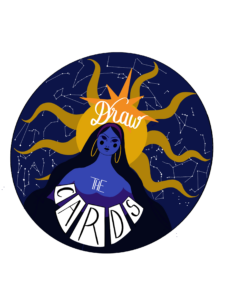 This interview and the other campaign list interviews were conducted on Zoom by writers of the Sundial Press. To ensure uniformity across list interviews, interviewees were given the same amount of time to answer questions, and lists for the same permanent bureau (ex. the two BDA lists) received the same questions. The interviewees had not seen the questions they would be asked, and a member of the campaign committee also assisted and supervised the interview. Although the interviews have been edited for clarity and concision, everything written was said by the list members.

Anne-Sophie Mariot: We want to run because we have something to show and something to add to the campus. You’re going to see through our promesses de campagne that we really have a purpose and that we’re not just doing this for fun as some people think. We really want to bring something new, to change the dynamics of how the BDA works and maybe add certain things that we thought were lacking this year or that we hoped to have on the campus.

Carl-Philipp Wengler: We’re also a group of random individuals, we’re not put together by a selection panel like the babies, for example, without criticizing them. We all just get along and function together, and we’re all very creative, we have good ideas. If you’d like to use a Tinder analogy, we just match, all of us, and it just works very well.

Elisa Vovos: I think, on top of being people that really get along together (which at first wasn’t really obvious but actually it’s very nice), we’re all very spontaneous in what we want to do. We all had our own personal projects, and the fact that we actually built a team made us capable of putting these projects into work. I think that what’s happening with our list is that we’re all little pieces of a bigger puzzle, and now we want to bring this whole puzzle analogy to the scale of the campus and to make it possible for everyone to act on the little projects they had in the back of their minds. And it’s not only about “oh, I’m an expert in drawing” or “I know everything about literature,” it’s being able to put forward everyone’s little interests and creating a large scale project – or, I’d rather say, projects.

Chiara Guigou: From studying previous campaigns, I’ve also noticed that there is this recurring pattern with an important issue that is at stake each year. We felt that this year it’s really being more accessible to everyone and not being above the people but really working with them. We want to enhance cooperation and collaboration between the bureau, within the bureaus and between them, but especially between the people and the ones working in the BDA.

Jean Prince: Also, what we wanted to do is to, as Elisa said with her formidable puzzle metaphor, is that our purpose is to help people. To give them that little picture, to make the BDA what we call in French “le déclic,” the push that people need to get creative. It’s not about supervising or deciding what is art, it’s about giving it back to the people to help them decide what is art and help them execute their projects.

Chiara: We want to be more of a platform where people could experience and come to us with ideas and projects, and we could be the ones to give them the energy and the means to achieve their ends and be more a part of the “executive branch” on campus.

Q: How will you make the visual and performing arts more accessible to students at Sciences Po who aren´t engaged in the arts?

Chiara: That is an interesting question because it’s pretty much the core of our entire scheme, if I may say so, because indeed, our name is Draw the Cards, and it’s more of a concept than a real name or brand. We really want to empower the people on campus, and incite them to express themselves.

Elisa: If we want to make some specific art more visible on campus, we also wanted to create also kind of a ‘mentor’ relationship, between us as people who would potentially be part of the next BDA, and be able to have people ask us what kind of project they want to put into the works, and so we are going to help them put it into the works. So even people who are not interested in art at all, but have a small idea, we could build up teams and thus spread our artistic influence and their artistic influence on campus.

Anne-Sophie: That’s why we created the pole “concept” which Elisa represents. It’s because we really want to have this opportunity for people to come and create new ideas, and not just to stay on what the BDA is already doing, but have this whole section which is devoted to bringing something new, bringing something that is renovated, and bringing something that people are liking. And we plan, through our campaign, to have a sort of buddy program, which will allow people to reach us more easily, and for us to be more accessible to people. Not only do we create new concepts and new ways through our pole, but then people can also come to us and propose new things, and add ideas that we might not think of, as a BDA.

Chiara: And it’s true that there’s often an emphasis on visual arts, and digital arts in general, but art is pretty much everywhere, with music, movies… Everyone feels concerned by these types of arts. This is why we are planning on creating theme evenings or parties, which are not technically only music, but a time for people to share their common interest in a given type of art, such as anime, which is one of the types of art that we are emphasizing as well. Aside from this “concept pole,” we also have a “mediart pole.” We want to really make media and the media culture a bigger part of arts itself, and memes, and stuff which can really become something of the artistic domain.

Q: How do you plan to make our campus an even more “artistically” lively place?

Chiara: If we really want to summarize it, it’s pretty much that we want to give a voice to everyone who wants to be heard or to express themselves through accessible means. I do not mean talking itself, but we really want people to feel involved which is something that we think has kind of been lacking. This is a bone of contention for our team as well.

Anne-Sophie: And if you want a concrete idea of what we thought of adding to the campus, we want to collaborate with SPE on the “café écolo.” It will be for us to have interventions, and people can go there to read their poems or their texts or sing music if they’re singers or play music, for them to have a space where they can perform whenever they want on campus without it being a specific event. It’s just having that option open, at the café écolo they will be able to perform on a daily basis, whenever they want without any judgement from anybody.

Jean: Also, the café écolo will be one piece in a bigger project of making this campus more aware of the literary arts. Because while we have some writing contests, it’s still viewed as something very inaccessible for people and we would like to democratize it. For example, allowing people to read their texts in public with a benevolent audience, to encourage them to write more. For instance, we can organize a writing contest during the Weimart with other campuses. The purpose is also to broaden our opportunities of discovering other types of literature alongside the classic things, like European and American literature. For example, for the Euraf program, discovering the writings from the négritude and things like that. We want to give people more space to express themselves.

Chiara: We want people to feel more involved in terms of their culture as well, in representing their own culture and creating a dialogue. We often hear that there is a separation between French students and international students and we believe that art is truly a way to link them. Culture sharing, especially through literature which is one of the most universal arts paradoxically, can be a way to do that.

Q: Apart from “promoting the arts on campus”, what would you say is the BDA´s most important role?

Chiara: I think, in a quite traditional conception of art, we would like to be this kind of cathartic platform, and to really be a way for people to express themselves. And still in this health concern and mentality, trying to be really a different aspect of our campus, and of its richness and diversity, and be a way to step back sometimes from the academic perspective, which can be felt even in non-academic fields. Expression is really our core concern and concept.

Elisa: We don’t see ourselves as an institution, but more as an instrument, and people can use us. When we come back to our theme, which is ‘draw the cards’, mainly in this moment, if we talk about coronavirus, or just the fact that we feel like a lot of things are slipping away from our hands. The BDA would be like a card that you’re taking from a deck. It gives you a purpose, but not only a purpose, it also gives you a way to express your current anger and awareness of what is actually happening in the world. That’s why also we are going to make partnerships with other bureaus, with SPE namely, regarding the environment. So I feel like we would be an instrument for everybody on campus.

Chiara: In a more global perspective, not only campus-centering ourselves, we believe that people don’t own their destiny that much anymore, and that we are not in control of everything, because of how broad the world is, how globalized it is, even though it is being put into question right now. We really want people to take action and become the master of their own destiny through art, at their really small scale maybe, but it’s still the most important in terms of how great they will feel afterwards, and how integrated they will feel in the life of campus. So “draw your card.”

Q: Is there one last thing you would like to add?

Chiara: We do have a catchphrase planned. “If you can’t control your destiny…”

Elisa: We’re super excited that the campaign is coming. We’ve been working on this for quite a long time now and, more than just getting along within the group, we’re very excited to get along with other people. Of course, there’s going to be competition and all that, but we want to present ourselves as another potential vision of art.